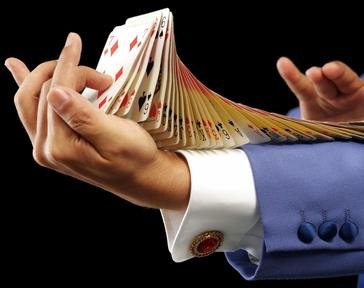 An exploration of magic words used in fictional and stage magic.

Quiz Answer Key and Fun Facts
1. We begin with the most famous magic word of all. J.K. Rowling used a variant of it in creating Harry Potter's "killing curse." The Steve Miller Band had a hit in the 1980s using the word as a title. Originally, it may have invoked the power of a supreme being. Which magic incantation am I referring to?

Like many magic words, the true origins of the word "abracadabra" are shrouded in mystery. It may have invoked the god Abraxas for protection. It might be a synthesis of the Hebrew words for "father," "son," and "holy spirit." It could also be from the Aramaic phrase "avra kehdabra," meaning, "I will create as I speak."

In ancient times the word was inscribed on pendants worn around the neck as protection from evil and illness. It was considered a far more powerful word in the classical age than it is now!
2. Another very common magic word makes fun of Latin words used in the Catholic mass. It was used as the title of a movie starring Bette Midler. It is generally used to indicate that one thing is being transformed into something else, through either sleight-of-hand or alchemy. Which magic word am I referring to?

"Hoc est corpus meum" is the original Latin chant, meaning, "this is my body." Spoken during the consecration, it is the most sacred moment of the Catholic Mass. It became "hocus pocus" as it moved from holy usage into alchemy and magic.
3. The 1785 translation of "1001 Nights" from French into English gave us a popular phrase used to unlock closed and hidden doorways. Which phrase is it?

"Open sesame" comes to us from a translation of "Ali Baba and the Forty Thieves." It was the incantation used by Ali Baba to open his hidden cave of treasure.
4. The Fairy Godmother in Disney's "Cinderella" helped to popularize a string of nonsense words as a magic spell. Which words did she use to transform a serving maid into a lovely lady?

Alliterative, nonsensical and extremely silly, "Bibbidi-bobbidy-boo" was not only a catchy magic word but also a very popular song upon its release in 1949. A recording of the song by Perry Como and the Fontane Sisters made it to #14 on the Billboard charts.
5. A magical phrase from the Sanskrit is interpreted differently depending on who you talk to, but the literal translation refers to a jewel in the heart of the lotus blossom. Meditate upon these clues and tell me, which sacred words do I mean?

"Om mani padme hum" is a Buddhist mantra. It has been translated phonetically from region to region, so the spellings may vary, but the tone and shape of the phrase remain essentially the same. Some meditate upon the overall meaning of the phrase, while others use the six syllables as symbols for individual tenets of the faith.

Like many exotic-sounding phrases, it has been imported into stage magic without all of the symbolism.
6. Bess Houdini held annual sťances on Halloween for ten years after her husband's death in 1926. Which secret phrase did her husband Harry promise to use to prove that his ghost was actually trying to contact her?

"Rosabelle" was a song that Bess used in her original act at Coney Island.

Harry Houdini spent much of his later life trying to disprove spiritualism and expose phony mediums. The agreement with his wife was his ultimate means of proving that a return from the dead was impossible. The sťances were supposed to continue each year for the rest of her life.

In 1929 a medium reported that the special phrase had been uttered during a sťance, but Bess claimed that the news was false - she had been ill during the sťance and the secrecy of the phrase could have been compromised.

Bess held annual sťances for 10 years, and then gave up on waiting and passed responsibility on to magician William B. Gibson.
7. The Amazing Mumford was an unlucky Muppet Magician whose tricks did not normally go as planned. His signature magic words mentioned a popular kids' food. Which snack was mentioned?

In his very first "Sesame Street" appearance, the Amazing Mumford simply said "A la peanut butter" as his magic incantation. After that it became "A la peanut butter sandwiches," a phrase that has stuck with him for the rest of his sketches.
8. Dante the Magician first popularized this magic phrase in the 1940s. It definitely has an Arabic flavor to it, which is possibly why it was also used by cartoon character Hadji in "The Adventures of Jonny Quest." Which magic phrase am I thinking of?

"Sim sala bim" may be based on the lyrics of a Danish nursery rhyme, or it could be taken from an Arabic phrase meaning "the lion is king of the desert." Like many magical mantras, its sources are shrouded in mystery. Dante the Magician, nee Harry August Jansen, used it as his catchphrase and the title of his Broadway revue.
9. A famous string of magic words was featured in the film "The Day the Earth Stood Still" as the only way to stop the destructive robot Gort from destroying the world. Which phrase was it?

"Klaatu barada nikto" has since become an in-joke throughout computer geek culture. It was referenced in films including "Tron" and "Star Wars," and even appeared as an Easter egg in the code for the Firefox web browser.

("Heghlu'meH QaQ jajvam" is Klingon for "today is a good day to die." "A Khasane in Shtetl" is Yiddish for "a wedding in the village.")
10. The next magic word is used in stage magic to indicate a rapid change - either a transformation or a disappearance. It comes from an Italian word meaning "quickly." Which word is it?

"Presto" is frequently used as one part of a rhyming pair of words, such as "presto change-o." It is also a part of the word "prestidigitation," another word for stage magic.
11. The original novel "The Wonderful Wizard of Oz" featured a lengthy magical chant. It ran "Ep-pe, Pep-pe, Kak-ke! Hil-lo, Hol-lo, Hel-lo! Ziz-zy, Zuz-zy, Zik!" When did the characters use this magical phrase?

In the novel, the flying monkeys are summoned when someone puts on a magical hat and speaks the phrase. The individual who the summoning also had to alternate between standing on the left foot or the right foot while the chant was spoken. Much like Aladdin's lamp, the monkeys could only be summoned three times by one person.
12. The word "Alakazam" comes from an Arabic word meaning "Allah wills it."

While "alakazam," along with many other magic words, has a definite Arabian sound to it, it cannot be traced back directly to any specific words. It may come from the Arabic word for "oath," or the Hindu word for "perfect," or it may simply be mumbo jumbo that sounded flashy and foreign.
13. "Mekka lekka hi, mekka hiney ho!" was the chant of a famous magical character from a 1980's television series. Which character used it as his or her catchphrase?

Jambi would use the phrase to grant Pee-wee Herman's wishes. Jambi was a green, disembodied head wearing a turban.
14. This next magic word was not invented for use in stage magic, but was adopted very quickly. It first appeared in the comic book "Captain Marvel" in the 1940s, and was originally an acronym summoning the power of six gods. Which magic word is it?

The young boy Billy Batson spoke the word "Shazam" to turn into the fully-grown superhero Captain Marvel. It was an acronym that summoned the powers of Solomon, Hercules, Atlas, Zeus, Achilles and Mercury. It was also the name of the wizard character that gave Billy the power to transform.
15. This magic word is possibly the most powerful of them all, but it is rarely used as an incantation. In an elegant and simple manner it can transform a demand into a polite request. Parents for generations have repeated the question: "what's the magic word?"

"Please" is an incredibly powerful magic word! It instantly creates a social contract between the person who utters it and the person who hears it, transferring power from the speaker to the listener. It adds a condition that mitigates what might otherwise be an excessive command: "Give me X, but only if it pleases you."
Source: Author kscleaves 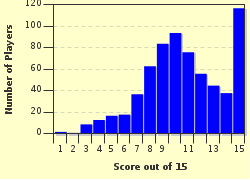 Related Quizzes
1. You Can Do Magic Very Easy
2. Do You Believe In Magic? Very Easy
3. Magic Tricks Easier
4. It's Only Magic Easier
5. It's a Kind of Magic Easier
6. Pick a Card, Any Card... Average
7. Match the Magician Average
8. The Magic Men Average
9. Siegfried & Roy: Masters of the Impossible Average
10. The Science of Magic! Average
11. Wild Magic Average
12. Nothing Up My Sleeve Average


Other Destinations
Explore Other Quizzes by kscleaves