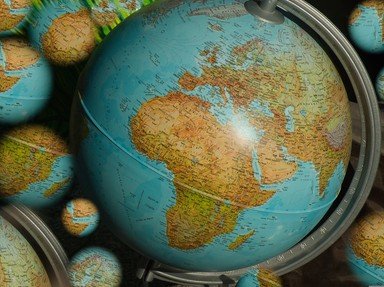 A kids' quiz on quite the continent!

Quiz Answer Key and Fun Facts
1. What is the longest river in Africa?

The Nile is in fact generally accepted as the longest river in the world (though some geographers claim that the Amazon may be longer). Its longest branch (called the White Nile) flows from Lake Victoria (which is shared by Uganda, Kenya, and Tanzania), while its other substantial branch, the Blue Nile, begins in Lake Tana, Ethiopia.

The two tributaries join in Khartoum, Sudan, and the great river goes into the Mediterranean through Egypt.
2. The longest-lasting and most influential civilization in African history (known for its still-impressive pyramids) provides the name for what modern-day nation?

One thing to remember is that the present-day nation of Egypt is NOT the same thing as the ancient civilization of Egypt. Ancient Egypt was very centered around the Nile River, while the modern nation covers a much wider area east-to-west. Along the same lines, at its height in the fifteenth century BCE, ancient Egypt extended up the Nile into present-day Sudan.
3. What is the tallest mountain in Africa?

Rising 5,885 meters (19,308 feet), Kilimanjaro is located in Tanzania. It is very near the Kenyan border, and about 180 miles (300 km) from the Indian Ocean. Though it is technically an extinct volcano, it has several cracks at the summit called fumaroles that emit volcanic gases. Geologists do not expect Kilimanjaro to erupt, but the possibility does exist.

Everest, Denali, and Puncak Jaya are the tallest mountains in Asia, North America, and Oceania, respectively.
4. Which of these countries never had any colonies in Africa?

In 1884 and 1885, representatives from several major countries met in Berlin, Germany to settle which countries would colonize which parts of Africa. As Europe had a much more developed technology and economy than Africa by that time, European colonists were able to virtually overwhelm the continent. Great Britain and France took the largest shares, followed by Portugal, Belgium, Germany, Italy, and Spain.

The only places not to be colonized were Ethiopia (which was later occupied by Italy from 1936 to 1941) and United States-sponsored Liberia.

The last European colony, Rhodesia, gained its independence from Great Britain in 1980, renaming itself Zimbabwe.
5. Running roughly along the Tropic of Cancer is a huge expanse of hot, dry land. What is the name of this desert?

In addition to being a remarkable geographic feature (at over 9,000,000 square kilometers, it is nearly as big as the United States or China), the Sahara effectively divides the continent, both ethnically and culturally. The regions along the northern coast, including much of Algeria, Tunisia, Libya, and Egypt, have historically had a much greater relationship with both Europe and the Middle East. South of the Sahara more distinct cultures have developed. Though "Sub-Saharan Africa" has indeed been influenced by both European colonists and the Arab world, this influence has been far less profound than in the area around the Mediterranean Sea.
6. Which of these large bodies of water does Africa NOT border?

Africa also does not border the Pacific Ocean, which has Asia, Australia, and all the islands in between as its western boundary.

The first people to sail completely around Africa - travelling through the Indian Ocean, Atlantic Ocean, and Mediterranean Sea - were probably Phoenician sailors commissioned by Egyptian King Necho II around 600 BCE. For many centuries this accomplishment was doubted, largely because of the fantastic claims the Phoenician sailors made, such as the Sun being to their north instead of to the south. Today, of course, it is understood that this is the natural position of the Sun south of the equator, and many historians believe that the Phoenicians did in fact succeed in this remarkable feat. It would not be done again for over 2,000 years.
7. Which of these is NOT a historic African city?

Timbuktu was an important trading center, bridging the western edge of the Sahara with the upper Niger river. It grew to be the most important center of learning and literacy in the West African empires of Ghana, Mali, and Songhai. Though it was probably one of the great cities of the world in the fourteenth and fifteenth centuries, it was in severe decline by the 1590s, and by the time of European colonization, it was a shadow of its former self. Alexandria was founded by Macedonian leader Alexander the Great in the fourth century BCE; it hosted one of the world's greatest libraries into the modern age. Zimbabwe (usually called "Great Zimbabwe") was a mortarless stone city in southern Africa that thrived in the 11th through 15th centuries CE.

By the time of European exploration, it had been abandoned - the reason for which is one of the great mysteries of world archeology. Tenochtitlan, on the other hand, was the seat of the Aztec civilization in Mexico. It was incorporated into what is now Mexico City after the Spanish invasions.
8. Part of northeastern Africa extends sharply eastward into the Arabian Sea to the south of Yemen and Saudi Arabia. What is this distinctively-shaped region commonly called?


Answer: The Horn of Africa

The Horn is home to the modern-day countries of Somalia, Djibouti, Eritrea - and Ethiopia, which has historically dominated the region. In ancient times, this area was closely linked with Mediterranean culture; there has been a Jewish community in Ethiopia for thousands of years, and that country is also home to one of the oldest Christian traditions in the world. With the rise of Islam in the seventh century, however, the region was cut off from these influences, leading to very distinct practices in both religions. Throughout history, this area was one of the most successful in Africa; the civil wars of the twentieth century, unfortunately, have transformed it into one of the poorest.
9. One of the great continuing adventures in visiting Africa is to go on safari - a trip through the countryside to observe the striking land and its wildlife. Which of these animals would you be least likely to see on an African safari?

Contrary to some popular beliefs, tigers are not native to Africa. Rather, they come from Asia, where they are severely endangered. According to some estimates, there are only 5,000 - 7,000 tigers in the wild today.
10. Finally, a question on African economics. Though much of Africa has been very poor in the modern era, some countries have had a good amount of success producing crucial products for the world. Which of these countries is NOT paired with its outstanding export(s)?

South Africa has one of Africa's most developed economies, but its financial base has always been its mineral wealth, both in the "glamour" categories of gold and diamonds as well as more strategic minerals used to make industrial and military alloys. At 36.2 billion barrels, Nigeria's proven oil reserves are tenth in the world. Liberia has been a major producer of rubber since the nineteenth century, though this has been a mixed blessing as the rubber trade has experienced a good share of corruption and labor brutality.

On the other hand, few African countries are known for their exports of manufactured goods (with the exception of small trade goods), and Ethiopia is no exception. Civil war and poor resource management have made food shortages a lasting problem in most of Africa since the 1970s, and the Ethiopian famines of 1984-85 were probably the most publicized of these disasters, but they are far from a thing of the past. That being said, Ethiopia does still export food products, most notably coffee, but also more nutritious commodities; the country remains the tenth-largest livestock producer in the world. In supreme irony, Ethiopia has exported food even in times when much of its population has been starving.

As always, I'd love to hear any comments you might have, especially those that will make this a better quiz. Thanks for playing!
Source: Author stuthehistoryguy 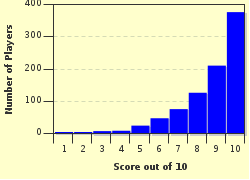 Go to Our World for Kids Quizzes