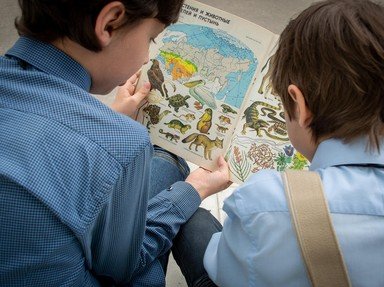 All About Genes and DNA Trivia Quiz

Life's instructions. How much do you know about genes and DNA?

DNA stands for deoxyribonucleic acid. Genes are the instructions for life, and genes are made up of a specific DNA code. DNA determines your eye color, hair color, height, and much much more!
2. DNA is written in a special alphabet containing only the four letters A, T, C and G. If the letters A and T pair up together, what letter does C pair with?

These letters are called bases or nucleotides. The letters are initials for the nucleotides adenine, thymine, cytosine and guanine.
3. DNA is shaped like a curved ladder. What is this shape called?

DNA's shape is a double helix, which is a spiral ladder of two strands. Each rung on the ladder contains the special DNA alphabet. The alphabet has only four letters: A, T, C, and G. The letters A and T pair up together on a rung, and the letters C and G pair together on a rung.
4. _______ are made up of DNA and are the instructions for life.

Genes are the instructions for life just as blueprints are the instructions for building a house. People have thousands of genes in every cell with each gene having a specific function, called a trait. An example of a trait is eye color.
5. Gregor Mendel is known as the father of genetics. He did experiments on a plant that makes round, green vegetables in a pod. What is this type of plant?

Gregor Mendel used the pea plant because of its special properties. Mendel could control pollination and cross breeding. Also, the pea plant has specific traits (flower color, plant height, etc.) that can be easily studied.
6. In genetics, what is hair color an example of?

A trait is a characteristic that can be passed on from parent to child. Genes code for specific traits. Some genes are dominant meaning that they are always expressed in a person, such as brown hair color. And, some genes are recessive meaning that they are only expressed when a dominant gene is not present, such as red hair.
7. DNA is wrapped together and packaged in structures called _____________. Humans have 46 of these.

The DNA code in genes directs the process for making proteins. Proteins are made up of amino acids, which are known as the building blocks of life.
9. In what part of the cell can you find packaged DNA?

The nucleus holds most of a cell's DNA. DNA is organized and packaged into tight structures called chromosomes.
10. Sometimes, genes have mistakes where there is change from the original code. What is this change called? 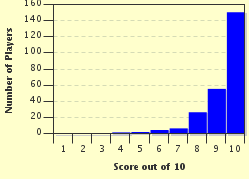 
Other Destinations
Explore Other Quizzes by jbogacik

Go to Science for Kids Quizzes