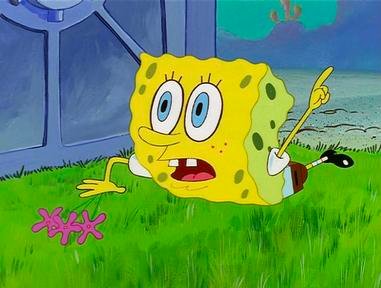 All Over SpongeBob! Trivia Quiz

Do you think you know SpongeBob and his show? Well, take this quiz to find out what you know.

Quiz Answer Key and Fun Facts
1. What design does SpongeBob's snail have on his shell?

If you watch the show Gary has a swirl on his shell. Once, Gary was entered in a snail race. Gary once chose Patrick over SpongeBob all because he had a cookie in his pants.
2. Where do SpongeBob and his neighbor, Squidward, work?

SpongeBob works at the Krusty Krab. He is a fry cook. Squidward is the cashier. Mr. Krabs is the manager. Once, SpongeBob forgot how to make a Krabby Patty.
3. What was in the secret box Patrick had in one of the SpongeBob episodes?


Answer: A picture of SpongeBob at the Christmas party.

SpongeBob said, "Remember when Sandy and I got married?" However, they never actually got married, because it was all part of a play.
5. What lie did SpongeBob tell Sandy when he first met her?

When he first met Sandy she said she lived in an air dome and that she breathed air. After that, SpongeBob said he breathed air too.
6. What colors are Patrick's pants?

If you look at Patrick's pants the backround is green. Also, there are flowers on the pants too. The flowers on his pants are purple. In one of the episodes, his parents come and they are wearing the same clothes as him.
7. According to the episode 'Atlantis Squarepantis,' which of the following is true?

His tie is red. The rest of his shirt is white, brown and black. SpongeBob is mostly yellow.
9. Who became the King/Queen of Karate Island?

SpongeBob was really getting bribed to buy a condo. He still got a video saying he was the King of Karate.
10. Here comes the theme song! Finish the lyrics: "Who lives in a _______"


Answer: pineapple under the sea?

The theme song is played at the start of every Spongbob episode. In the beginning there is a pirate. The pirate appears in the episode when SpongeBob has to learn how to tie his shoe.
Source: Author lucybutterbaby 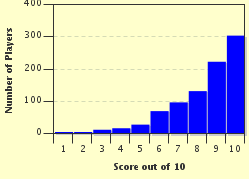 
Other Destinations
Explore Other Quizzes by lucybutterbaby