Maybe you play soccer or you just like the game. Let's see how much you know about the game that is the most popular game in the rest of the world.

Quiz Answer Key and Fun Facts
1. What is required of you to wear to play in an organized game of soccer?

All organized soccer teams require the players to wear shinguards. They are plastic molds that are worn to protect your shins from kicks by other players. There are no helmets or shoulder pads in soccer and gloves can only be worn by goalies.
2. The person who officiates the game is called a referee.

The officials are called referees. Other sports that have referees are football, volleyball and basketball. Baseball, softball and cricket have umpires.
3. What is soccer's international championship games called?

The World Series is baseball's championship, the Super Bowl is football's, and FIFA is the organization that oversees international soccer rules. The World Cup is played every four years.
4. What soccer position, on average, runs the least?

Goalies tend to stay very near their goals. They may come out a little if they feel they can get the ball before the attacking team arrives. Midfielders tend to run the most as they have the most ground to cover.
5. How is a soccer game started?

Kickoffs are used to start both halves of the game as well as after a goal is scored. A punt is used in football, a throw in is in soccer but it doesn't start a game, and the first pitch is for baseball.
6. What part of the body can't touch the ball (unless you're a goalkeeper)?


Answer: Palm of the hand

No part of the hand or arm can touch the ball. A hand ball penalty will be called and the ball is given to the other team. You can use your head (as you get older) to send the ball over the other team, you can control a wild kick to you by first bouncing the ball off your chest down to your feet, and you certainly want to use the inside of your foot to dribble the ball.
7. A typical final score for a game of professional soccer might be 38-27.

Soccer games tend to be low scoring games. You only receive 1 point for a goal and typically not very many goals are scored. Professional soccer games easily can end with a score of 1-0. Kid and recreational games tend to have a few more than that but definitely not 38-27 goals!
8. What size ball is considered full size?

Size 3 balls tend to be the size most kids start with around age 4 in organized soccer. Size 4 is recommended for ages 8-12 and the final size of 5 is for those aged 13 to adult.
9. What is another common name for soccer?

While American football barely uses the feet during the game, soccer is played almost entirely with the feet, so "football" is a very appropriate name. The rest of the world refers to US-style football as "American football" or "gridiron".
10. When will an improper throw-in be called?


Answer: If you jump.

A proper throw in requires both feet on the ground, both hands on the ball and the ball thrown over the head. You can't jump, pick up a foot, throw from the side, use only one hand or toss underhand. While most coaches encourage you to be completely behind the sideline, your feet can actually be on the line, so long as you are not completely over it.
Source: Author iznibs 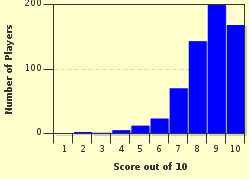 
Other Destinations
Explore Other Quizzes by iznibs