The Aliens of "Ben 10" Trivia Quiz

This quiz is on the "Ben 10" aliens. It includes ones from the Omnitrix and the villains.

Quiz Answer Key and Fun Facts
1. What alien is evil and got stuck in the Omnitrix?

In season 2 Ghostfreak escaped from the Omnitrix and revealed he was evil. He then tried to possess Ben so he could have the Omnitrix.
2. Who is the main enemy in season 1?

All throughout the season, Vilgax sent people to get the Omnitrix. In the season finale, he almost succeeded.
3. Which alien can eat things then barf it up?

Upchuck first appeared in season 3. It was the episode "The Visitor."
4. Who was the first alien whose DNA was put in the Omnitrix by Ben?

Ben absorbed Benwolf's DNA first. Then he absorbed Benmummy's DNA. He absorbed Benvictor's DNA in the season 3 finale. He didn't get Ditto's until season 4.
5. Which alien has no eyes and is quite dog-like?

Wildmutt can also climb trees with his sharp claws. Along with him not having eyes, he can't talk either.
6. Which alien has four arms?

Fourarm's name really tells you what his power is. A lot of people don't really notice he has four eyes too.
7. Which alien lives on a sun?

Heatblast can shoot fire from his hands and mouth. He also can put out fires.
8. Which alien has super speed?

XLR8 is just a short way to name him Accelerate. Ben does this a lot when naming the aliens.
9. What alien can become a ball?

A lot of people think his name is Cannonball, but his real name is Cannonbolt. He appears first in "Big Tick," an episode in season 2.
10. What alien is a plant-like creature?

Wildvine appeared in "Camp Fear" in season 2. He can shoot gas bomb seeds out of his back, and can stretch his arms and legs. This came in handy when he was fighting off the mushrooms.
Source: Author m4tthew101 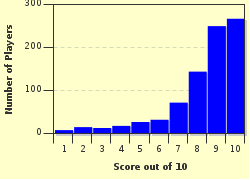 
Other Destinations
Explore Other Quizzes by m4tthew101