How about those famous tall tales and legends we tell each other! Some say they are real. Some say, "What silly nonsense!" I'll tell you a version of the tale. You answer a question about it.

Quiz Answer Key and Fun Facts
1. The story goes there was once a funny-looking man who walked for miles and miles, and wherever he walked, fruit trees sprang up at his feet. Who was this man?

Johnny Appleseed, whose real name was John Chapman, loved animals and even insects. He wore no shoes, and everywhere he walked, he planted baby apple tree nurseries. He loved to read stories to little children. As for trees springing up at his feet, that's something to think about.
2. An explorer named Ponce de Leon heard that Natives of a new land were giants who lived to be 200 years old, and never got sick! He was so excited, he sailed there to search very hard for what?


Answer: The fountain of youth

He sought the fountain of youth. He was sure that those giant, healthy Natives had special water they drank which made them live so long. He wanted to find those waters. He never did. Do you think those Natives were 200 years old, giant, beautiful, and never got sick? That's the way that he heard it.
3. Kidnapped workers called slaves had bad lives, so Harriet Tubman and others made a secret escape path for them which became a legend across the land. What was this secret passage called?

The Underground Railroad was a secret path that helped slaves run away from the farms they hated. Was it a secret railway train underground? Harriet did use words like conductor, ticket and depot when she talked about it. Many called Harriet "Moses" because she was a brave leader who led people to safety, just as Moses did in the Bible.

While most legends are based on the truth, parts of the story become larger than life. In this case, there was a secret route to freedom; but there was no train underground.
4. Did you hear about the king who was covered in dust made of pure gold! In fact, his whole city was made of gold. Explorers searched everywhere for this city. What was it called? Think of a Spanish name.

El Dorado was the name of the man and his city. When he was crowned, his people covered him in gold dust. Explorers heard a story that his city was made of gold! The streets, the buildings, and the chairs, all glistening gold! They looked for it for hundreds of years, and even put it on their maps.

But no one ever found El Dorado. Do you think there could be a city where everything is made of gold?
5. These mighty warriors were women. They were taller than the trees, with legs as big as tree trunks, and they had flat chests so they could shoot their arrows faster. Who were these mighty lady warriors?

Amazon warriors are seen painted on ancient jars, walls and shields. Explorers like Christopher Columbus mentioned them, and an explorer who was attacked by women warriors in South America named the Amazon river after them. The Amazons were led by queens and were brave and strong in battle. Sometimes you hear tall tales about them, but the ancient drawings show that they were normal size women, shooting arrows and carrying war axes, who ruled a big part of the land. Unless, do you think they WERE big as trees and shaped like men?
6. A very rich warrior king and his people had ideas far ahead of their time. But one day their whole island sank under the ocean! What is the name of this famous place that sank?

Atlantis was, they say, a big island with a rich and powerful king who sailed out to made war on bigger places. The people had very smart ideas about how to live well. Then one day quite suddenly the whole island sank under the water. It was never seen again, and no one knows exactly where it was. Could divers find it someday, a sparkling city under the sea? Can an island just suddenly sink? Many a person has pondered these very questions.
7. If you are in the deep woods or high mountains, you could be scooped up by this giant, furry man, or you might see his footprints. What do some call him?

Bigfoot is also called "sasquatch", from a Native word that means wild man. Bigfoot has been seen all over the world. He is ten feet tall and weighs up to 1,000 pounds. That's huge! Many people think Bigfoot is just made-up silly nonsense. Others insist he is real, and he kidnaps people, and he smells terrible! Some scientists believe Bigfoot may be a giant gorilla we thought died out long ago. What would you do if you were walking along and saw a ten foot, smelly, hairy, wild man with big feet? Would you take out your camera? I would run!
8. The way I heard it, this woman was so beautiful, ancient men fought a war over her. Many say her father was the Greek god Zeus. Do you know her name?

Helen of Troy was so beautiful many men wanted to marry her, but Paris kidnapped her for himself. Helen's husband was furious, so he ordered his ships to set sail and start a war over her! Helen is called, "the face that launched a thousand ships", because her beauty caused ships to go out to fight.

It's an exciting tale, though we aren't sure which parts are true. We do know that Helen was a princess from Sparta. She was taught wrestling, horseback riding and gymnastics, like all Spartan girls and boys.
9. A story often told is how the great King Arthur pulled a sword right out of a rock. What was his sword called?

Excalibur was a special sword made of steel, given to King Arthur by the Lady of the Lake, who just stuck her arm up out of the lake and handed the sword to Arthur. Even if a lady in a lake could do that, can a man pull a sword out of a rock? If so or if not, this is a wonderful story about a great British king.
10. This beautiful queen of Egypt sailed up the Nile river in splendor, and the legend goes she sailed with her fleet of a thousand ships! She was so pretty, two very powerful men fell in love with her. What was her name?

The great Egyptian Pharaoh Cleopatra seen in Hollywood movies could be silly nonsense. She was not beautiful at all, for instance, she had a very big nose! She did sail up the Nile in splendor, but could a thousand ships fit on the river? I am not sure about that. She was the Queen of Kings, who died very young. She, her ships and her husband were defeated by the Roman Octavius.
Source: Author Godwit 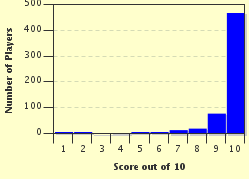 Related Quizzes
This quiz is part of series For Quiz List Badge Tarts:

A quick mixed list to helps those stretching for the Quiz List badges and upgrades. Hopefully enjoyable too. I say "tart" with great affection