As a General category editor here at Funtrivia I often encounter some of the same questions over and over again. In fact I have seen these questions so many times that I figured...something must be done! The following quiz is what I have done about it...

Quiz Answer Key and Fun Facts
1. People frequently ask the question, 'What is the only manmade object that is observable from the moon?' The answer is of course, 'The Great Wall of China' according to the askers of this question...but is it? In honor of this frequently asked question, here's another! What do the Chinese people call the Great Wall?

Chinese people call the wall 'chang cheng' which literally means 'long wall'...pretty exciting name, huh? (It's also called 'wan li chang cheng' or 'ten thousand mile long wall'...a little more exciting still!) As for the Great Wall being an observable object from the moon, that's highly in doubt...ask Buzz Aldrin for a definitive answer.
2. 'What is the capital of Australia?' seems to be another favorite amongst quizmakers in the general category. Perhaps the Aussies wish to giggle while watching their pals in America, England, etc. answer foolishly by clicking the little button next to 'Sydney' or 'Melbourne'. The clever ones amongst us know that the answer is Canberra! Speaking of Canberra, what does that name mean in Aboriginal lingo?

You see? I'm sure you learned something new here and you didn't have to suffer through the embarassment of choosing between Sydney and Melbourne.
3. Here are two popular ones for the price of one: 'Who was the 'mad monk' of Russian history?' and 'What was the nickname of the Russian 'holy man' Gregory Efimovich?' Since we all know the answer to both questions is Rasputin, I shan't regale you by asking once again! However, I will ask...what does the name Rasputin mean?

Gregory seemed to delight in this nickname given to him while he was young, he delighted in behaviors that would be most unbecoming a true holy man...or so it appears.
4. Oh yes, here's one of my favorites, 'What is the largest fish in the ocean?' The trick here is to understand that a whale shark is a fish, and not a whale! Strangely, a question that never gets asked, which of these has long been considered the world's smallest fish?

The dwarf pygmy goby...a fish so small they had to resort to repetition in its name! Obiter dictum, this fish is only .31 inches long on average, or 8 millimeters. Another fish, the stout infantfish, has recently laid claim to the title of world's smallest fish, as a specimen has been discovered that is only around 7 millimeters in length. Whichever fish ultimately wins the prize, it is certain that a whale shark would be forced to eat a lot of both in order to whet its appetite!
5. Here's one that you may have heard (and heard, and heard...) 'Which artist painted a mustache and goatee on the Mona Lisa?' The answer is of course Marcel Duchamp, who proceeded to call his new work 'LHOOQ' (when the letters are sounded out in French, a nice message about her derriere appears). As you can see, Mr. Duchamp was quite adventurous. Another one of his exciting distractions was to sign paintings with a female pseudonym. What was this fictional name?

Incidentally, this name 'Rose Selavy' or 'Rrose Selavy' sounds a lot like 'Eros, c'est la vie'...another whimsical play on words! Aren't you glad I didn't ask the more quotidian question now?
6. This one is an oldie but a goodie...'Which common word changes its pronunciation when the first letter is capitalized?' The answer: polish, the verb that becomes a proper adjective or noun describing a nationality, Polish, when the first letter is capitalized! But that question isn't very fun...let's try a more exciting one. Which English word, meaning a teeming crowd or swarm, came to us from the Polish language?

From the Polish word 'horda' meaning 'camp' (which, in turn, was originally derived from the Turkish 'ordu')...often used to desribe the invading nomads from the central Asian steppe, i.e. Mongol hordes!
7. How many times have you heard this one, 'From what wood was Noah's ark made?'? I've heard it enough times that I think I could recite 'gopher wood' in my sleep! Speaking of wood, I *would* like to ask a more interesting question. Pando, possibly the heaviest living organism on the globe at about 6,600 tons, is a member of which tree species?

The name Pando means 'I spread', and he does, covering an entire 200 acre area with his babies (or 'suckers'...they grow up from his roots) that are all connected as one living organism! Pando lives in the Wasatch Mountains of Utah, in case you want to pay him a visit! By the way, no gopherwood can be found there so don't plan on arking your way out...
8. 'Which player was the last to hit at over a .400 average in Major League Baseball?' This is a clever, but overused question that I often encounter. It seems that Ted Williams, who hit .406 in 1941, will ALWAYS be the answer! Let's try something a little different here. What was Williams' batting line during the final game of that season?

Williams had a lot of guts. Coming into the last day of the season, he was hitting .3996, and could have sat out the double-header on the last day of the season, preserving his .400 average (the art of rounding up!). However, the Splendid Splinter would have none of that, he decided to play the first game of the double-header and went 4 for 5 with a homer and three singles! He now had an average of .404.

Not done yet, he played the nightcap and went 2 for 3 with a single and a double...ending the season with a well earned .406 average. Will anyone ever hit .400 again?
9. T.V. fanatics ought to be familiar with this question, 'What was the name of Colonel Potter's horse on the television show M*A*S*H?' Sophie? So good! But we can find something a little more challenging to ask than that, can we not? Here's a possibility...which of these regular or semi-regular M*A*S*H actors was the first to pass away?

Johnny Haymer, who played Sgt. Zale, died in 1989. He was followed in death by: Mclean Stevenson (Colonel Blake) in 1996, Larry Linville (Frank Burns) in 2000, and Edward Winter (Colonel Flagg) in 2001. Sad huh? By the bye, the whereabouts of Sophie are unknown! Perhaps she runs in that great herd in the sky...
10. Certainly this quiz wouldn't be complete without referring to the famous question, 'On which island was Napoleon exiled following his defeat at Waterloo?' Heck...everyone knows it's St. Helena, that tiny little island in the south Atlantic. Here's something that you may not know, though...on which ship did he make the 10 week trek to St. Helena?

Poor Nappy...he had to suffer on that little vacation paradise in the middle of nowhere...which leads me to another FAQ, where did Napoleon die? The answer: St. Helena!
Source: Author thejazzkickazz 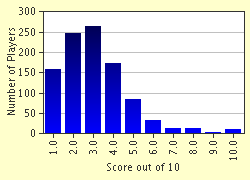