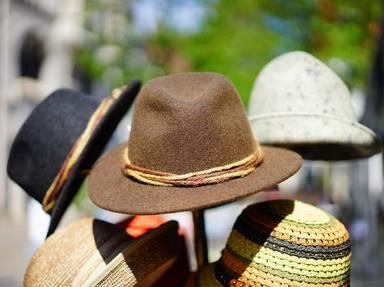 Hats off to you for playing this quiz! Try to match the headgear described with the head that wears it.

Quiz Answer Key and Fun Facts
1. Made of sheep skin and fur, studded with blue stones, a traditional headwear of women in Indian Himalayan regions.

The blue stone used depends on the group creating the hat - some use lapis lazuli (notably the people from Zanskar, where the gem is produced in the neighbouring Pamir and Badakhshan regions), while others use turquoise. Turquoise has to be imported from China and is considered to be more sophisticated. The stone itself represents represents various deities.

The headgear is a considered an heirloom, passed down from mother to daughter. It is a display of wealth and respect, with the rows of blue stones indicating the stature of the wearer. The Ladakh and Zanskar districts are in the Kashmir and Kargil regions of the Himalaya respectively.
2. Standard ceremonial felt hat, brim pinned up on one side, worn by the Australian military.

The 'khaki fur felt (KFF)', known affectionately as the slouch hat, is associated primarily with the Australian army forces. The 'slouch' part refers to its brim which was made from rabbit fur.

The design of the Victorian Mounted Rifle hat, from which the KFF sprang, originated with the head covering worn by the native police in Burma, though a hat of similar style was also worn by the South African Cape Mounted Rifles. In Victoria, Australia, the hat was turned up on the right side the accommodate the drill movement of 'shoulder arms'. Confusingly, while the hat was adopted across the states of Australia, the brim was turned up on different sides according to the drill movements of various State armies. Eventually the brim was turned up uniformly (pun intended!) on the left side, with the unit's badge affixed to the right side of the band.

When not performing ceremonial duties, army members wear the slouch hat with the brim down to provide additional protection from the sun. The hat is adorned with a pleated band called a puggaree, a term which came from the Hindu word for turban or scarf, 'pagri'.
3. A military head-dress made of fur, worn by Hungarian hussars; also known as a Fur Shako.

A busby, a tall cylindrical fur hat, is also known as fur shako, prémes csákó or kucsma, or colloquially, a bearskin. They traditionally have a straight plume in the front of the headdress, and a cloth flap hanging down in the right side to protect against sabre attack.

The flap has become largely for show rather than for defence and can be made of lambswool or other materials depending on the tradition of the military unit wearing it. It is thought that the term 'busby' originated with W. Busby of the Strand, London, who made the officers' version of the headwear.

The busby is mostly used now for ceremonial occasions.
4. Four-pointed, crowned hat, made of stiffened material, worn by Polish infantry and cavalry forces.

These military caps come in two variants - hard or soft; and they have a four-pointed top and a short peak. The 'rog' in the name means horn or corner, and similar caps have been used by Polish military and light cavalry since the 14th century. The hard model is used in full gala uniforms.

There are nine rim colour variants that indicate the unit type; for example, violet indicates a member of the chaplaincy, cherry means a medic, and dark green designates rocket forces, artillery, and anti-aircraft units.
5. Medieval headgear usually made of fine white linen or silk, worn by women, and covering the head and around the neck and chin.

In the Middle Ages, a wimple covering the hair was worn by married women as a sign of modesty. In fact, in the late 1100s in France, prostitutes were forbidden to wear wimples lest they be thought to be women of virtue. Women who were poorer wore wimples made of wool, while the wealthier ladies had a headdress made of linen or even silk. Wimples and veils with a ruffled edge were known as 'goffered' (embossed or crimped).

They were sometimes adorned with beads, pearls or golden thread.
6. A cap with a soft, round, flat crown, made from crocheted cotton, wool or felt.

Berets are used in military, paramilitary and civilian situations. Civilian berets, often woven or hand-knitted, can be adorned with ribbons, a brooch or felt flower. In the military, they have a tight band, with a designating badge located on the left side.

The colour indicated which military or paramilitary troupe the wearer belongs to. The green beret is worn by members of the Royal Marines after they have passed the commando course, and it was the official headdress of the British Commandos of the Second World War. United Nations peacekeepers are sometimes referred to as Blue Berets.
7. Woven conical plant-fibre hat trimmed with leather, worn above a turban by people of West Africa.

The Wodaabe are a nomadic cattle-herder subgroup of the Fulani that are most associated with the origins of the Fulani hat. The Fulani empire was a Muslim theocracy of Western Sudan. The hat is trimmed with leather, with a leather knob at the top. It is often also decorated with leather appliques.

The hat was both practical in protecting its wearer from the sun, and a symbol of wealth. It was worn by Fulani men during festive occasions to attract a wife.
8. Worn by Terry? A cap with bells donned by a court fool, shaped like a monk's cowl with donkey's ears.

The 'ears' of the jester's cap each has a jingling bell at the end. Traditional jesters performed tricks, juggled, and created witticisms for his master's enjoyment. Some fools were travellers and moved from noble house to noble house and also performed at fairs.

He was often talented in singing and playing instruments, dancing and even ventriloquism. The hat was considered a distinctive part of the fool's attire and the costume became gaudier as time went by. The ears of the ass were joined by the donkey's tail in some costumes.

The picture on the joker playing card usually also displays the fools' tassels.
9. Literally means 'dome'; traditionally worn by men as a symbol of awareness of, and submission to, a higher entity.

Also sometimes called a kippah, the yarmulke is worn by all men in the Jewish Orthodox tradition during prayers, and generally at all other times by most men except while sleeping or swimming. Wearing the head covering symbolises giving reverence and devotion to God.

In modern times, the yarmulke can represent the wearer's sect or even political leaning. They are made in different colours and materials, and can be crocheted or knotted, or made of suede, leather or velvet; they are often made of silk.

The word yarmulke has several etymologies all meaning skullcap - 'yarmlke' in Yiddish, 'jarmuka' in Polish & 'yarmulka' in Ukrainian, but the Turkish word 'yamurluk' is closer in meaning to 'rainwear'.
10. Traditional folk headgear of the Iberian Peninsula, made from lamb skins and often worn by matadors.

A montera is a flat-topped hat traditionally worn by a matador or torero, which has a bulge over each ear, reminiscent of bulls' horns. The hat is usually of astrakhan fur, an ancient breed of domesticated sheep. Apart from the traditional wear of the matador, the montera is also worn as part of folk costumes of both men and women of the Iberian Peninsula.

A variation, the montera picona, has pointed tips instead of bulges, and these can be either worn pointing upwards, or down over the ears.
Source: Author VegemiteKid

Related Quizzes
1. Mad As A Hatter! Easier
2. Hats that Never Really Were Average
3. Men With Hats Average
4. Keep It Under Your Hat Tough
5. Clothing Connections Very Easy
6. Material Connections Easier
7. I'll Get My Coat Easier
8. Puttin' On the Mitts Easier
9. All You Need Is Gloves Average
10. It Has to Be Silk Stockings Average
11. A Scarf-ful Lot of Questions Average
12. Famous Tartans Average