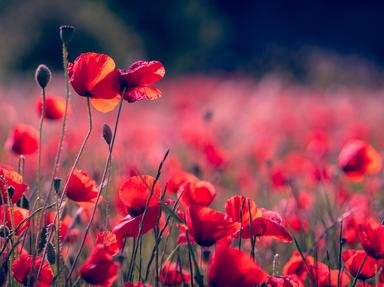 Red is a color that symbolizes many emotions including anger and passion. Can you identify the different shades?

Quiz Answer Key and Fun Facts
1. Identify this shade of dark red. It looks like burgundy, but is more purplish and dark brown.

The color oxblood has been part of the English language since 1695-1705, and commonly portrays fashion and power. Sometimes it is also called red wine.
2. This shade of red takes its name from what pours out of a volcano.

In 1892 lava was first used as a color name to describe the liquid flow of volcanoes. Dark lava is used to describe the color once the lava has cooled.
3. What shade of red is also called E120 or Natural Red 4?

Carmine was a term first used to describe a color in the English language in 1523. There are a variety of shades of carmine including: rich carmine, Spanish carmine, and pictorial carmine.
4. This shade of red is named after the sepals on the flower of a particular plant.

Named for Leonard Fuchs, there are approximately 110 varieties of the plant. Mostly found in Central and South America, there are also species found in the Pacific region. The bright colors of the plant attract hummingbirds.
5. Identify the shade of red that is named after a fruit called "framboise" in French.

First used as a term for a color in 1892, there are several shades of raspberry, including French Raspberry, and Raspberry Rose. The color is the traditional shade used in Cossack uniforms.
6. What color is half way between red and purple on a traditional color wheel?

The magenta dye was originally called fushsine, however, after the Battle of Magenta in 1859, the name was changed. In optics magenta and fuchsia are considered the same color, however, in color printing fuchsia contains more red.
7. Which shade of red comes from the French word for flea?

After a flea has been killed on a bedsheet, puce (or "flea color") is the color of the bloodstains. The term as a color was used beginning in 1787, and is said to have been a favorite of Marie Antoinette.
8. Meaning "baked earth", which shade of red is normally used to describe the color of flower pots?

Terra-cotta is a ceramic that was produced by ancient people and used in a variety of shapes. It has been used in sculpting, architecture, and making water pipes.
9. Which shade of red is traditionally thought to be the shade of fire or flame? It may also be used to describe the color of human blood.

The use of scarlet as a color name dates to approximately 1250. In the Catholic religion, scarlet robes are worn by Cardinals. Really, the blood of a living person is probably closer to crimson than scarlet.
10. This shade of red is used to describe the color of a red gemstone.

A ruby gemstone's color can vary from pink to blood-red, and the color helps to determine the value of the stone, with blood-red being the most valuable. Rubies are a form of the mineral corundum.
Source: Author ponycargirl 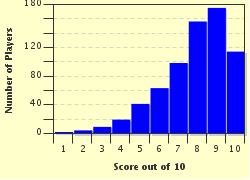