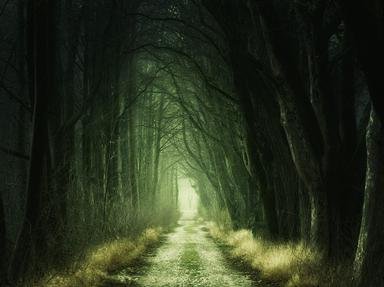 These questions are all based from the book "Weird Georgia" from the "Weird US" series. It will give you some insight to a few of the lesser known, but still famous, local legends of Georgia.

Quiz Answer Key and Fun Facts
1. This person, who was the most famous resident of Heard County, was known as being a soothsayer and witch.

Mayhayley is said to have put a hand on her head and a hand on her feet and given everything between her hands to the devil for the gift of prophecy. The non-fiction novel, "The Murder in Coweta County," is about the murder in which Mayhayley helped to solve with her ability.

Her tombstone today is said to be cursed. People who steal it or part of it encounter bad luck, or even death. Several people who have stolen it have died in a car accident several days later.
2. What very famous citizen of Georgia has been very vocal about his encounter with a UFO?

Even though he is not the only governor, or even president to have seen one, he is the most vocal about it. His sighting came on January 6, 1969, as he was going to speak at a Lion's Club meeting in southwest Georgia. He didn't reveal this until September of 1973 when he said, "I am convinced that UFOs exist because I've seen one. I saw it before I became governor. I haven't seen any since I have become governor." Days later Hayden Hughes, the director of the International UFO Bureau in Oklahoma City sent Carter a letter and a UFO reporting form which Carter filled out.
3. This giant beast of an animal was shot in Tifton. He was rumored to have weighed 1000 pounds, been 12 feet long, and had 9-inch tusks. What has this beast been nicknamed?

This giant hog, hogzilla, was shot by Chris Griffin in 2004. After he shot it he took a picture with it suspended from a backhoe. Many people believe that this is a hoax because Griffin buried it without taking any physical evidence from the pig. Griffin claimed that the meat would have been too tough to eat from a hog this size and slaughtering it would have been extremely expensive. Mounting it would've taken someone who was experienced in mounting elephants because of its size.
4. Snowball was a peaceful animal. One day Carl Hulsey, a seventy-six-year-old Cherokee county resident purchased Snowball. The county coroner came and visited Hulsey and often saw him beating Snowball because Hulsey was training it to be a watch animal. After a year of this Snowball got his revenge and killed Hulsey. What kind of animal was Snowball

Snowball was a 110-pound goat with large horns. One day when Hulsey poked Snowball with a stick, he butted him in the stomach twice. Then chased Hulsey to the porch where he rammed into him sending Hulsey flying five feet to the ground. Hulsey suffered a ruptured stomach.

Many of Cherokee county's citizens wanted to preserve Snowball and keep him from being euthanized. People were calling from across Georgia, the United State, Great Britain, and Germany to request that Snowball be spared and he was.

He died of natural causes on January 20, 2002.
5. The third bridge after Whitesfield Road turns to a dirt road is known as Crybaby Bridge. What city in west Georgia is this bridge north of?

The story is that two children drowned either accidentally or at the hands of their deranged mother here. If you stop your car on the bridge, you will here the children crying from under the bridge. Sometimes, you can see a figure in white prowling in the wood line. Even more rarely, the figure will approach your car.

It is also said that if you put baby powder on the hood of your car, you will see either footprints or handprints in the baby powder.
6. On the north side of Berry College in Rome is CCC Road. If you drive west on this road, there are a certain number of bridges. After you cross the last bridge, if you turn around and drive back east there will be one less bridge. How many bridges are there going west and going east, respectively?

CCC Road is also known as Seven Bridges Road. People believe that the cause of this phenomenon is the Mountain Springs Church, an abandoned building and cemetary at the western end of the road. People have heard phantom footsteps in the graveyard and strange music emanating from the church.
7. There are many stories of ghosts haunting schools in Georgia, but not all of them are frightening. This one in fact is quite pleasing. There is often the scent of bacon and eggs wafting through the halls. What Coweta county high school does this pleasingly scented ghost haunt?

The legend is that the land that Northgate is built on was once a plantation. The plantation owner killed a slave one morning at breakfast and that's where you get the scent of the bacon and eggs.
8. The Haunted Pillar is all that remains from a market that flourished in the late 1800's in the downtown area of one of Georgia's oldest cities. It is said that all who touch it meet their end. In which city is this pillar located?

The pillar is located on the corner of Fifth and Broad streets in downtown Augusta. An Old Testament-style preacher proclaimed that the market would be destroyed by a storm and all that would be left was the southwestern column. At 1:10 a.m on February 8, 1878, a tornado touched down in Augusta and destroyed the market, except for the lone pillar.

The pillar was moved to its current site and then the curse kicked in. In an attempt to widen the road, two men who attempted to move the pillar were struck by lightning or otherwise caused to die.

In another version, a bulldozer operator died of a heart attack while he was advancing on the pillar.
9. Waverly Hall is a pleasant little community in west-central Georgia. It was established in 1829 and has its share of historic homes, however, there are no tales of haunted structures. The cemetary on the other hand, has gained a reputation for being Georgia's most haunted. In which county is this haunted graveyard located?

One paranormal investigation of the cemetary lasted from 11:30 p.m. to 4:00 a.m. During this period of time, 43 EVPs (Electronic Voice Phenomenon) were recorded. Most of them are saying "Get out!" or "Get out of here!" or even "Get lost!" and other similar commands. There was one very talkative ghost however, nicknamed Kile, who kept trying to lead the team to a specific gravesite.
10. During the 1930's, a horrible car crash occured on the Cedar Creek Bridge on Roscoe Road near Newnan. In this crash a mother and her baby died, but they did not go to their deaths quietly. In which county is this "Screaming Bridge" in?

The woman had been seen at the bridge and heard screaming in horror and grief. Now the temperature falls dramatically and a ghost car appears and vanishes at certain times.
Source: Author brave373 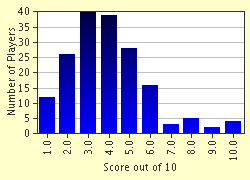 
Other Destinations
Explore Other Quizzes by brave373