Anything Can Happen Trivia Quiz

Pollsters, pundits, and the public can speculate all they want, but you simply never know what can happen. Here are some great upsets in history. How well do you know them? Have fun!

Quiz Answer Key and Fun Facts
1. Let's start way, way back in time, so far back that according to Greek mythology it's the 12th or 13th century BCE. The Greeks have been trying to capture the city of Troy for over 10 years and they devise a plan. They leave a giant wooden horse as a gift for the Trojans, who bring it inside their city walls. What did the Greeks put inside the horse?

"Beware of Greeks bearing gifts" refers to the fierce warriors who were secretly hiding inside the giant horse and who came out fighting, leading the Greeks to a decided win again the Trojans. This story was recounted in both "The Odyssey," written by Homer in 8th century BCE, and "The Aeneid," by Virgil in the 1st century BCE.
2. Let's hop over to the Bible for the next big surprise. The large Philistine army went to war against Israel, and their biggest, scariest warrior was the giant Goliath, who was over 9 feet tall with seemingly impenetrable armor and a bad attitude, to boot. Who was the young boy who felled this giant with just his slingshot and a few stones?

As the story goes, David was an excellent shot and his stone landed right in a small vulnerable spot in Goliath's armor, knocking him down. This tale has come to personify the victory of the underdog.
3. We're going to time travel about a thousand years now and take a look at the Battle of Trenton. The year was 1776 and George Washington and the Continental troops were fighting for independence against Britain and their hired soldiers, German Hessians. On a cold night, Washington ambushed the Hessians by crossing the freezing Delaware River. The battle was a decisive win for Washington and a turning point in the war of Independence. What holiday did this surprise attack take place on? Hint: Note the weather conditions.

The bitter cold of Christmas would have kept lesser men from fighting. I think the lyrics from "The Shot Heard 'Round the World," a song on the Schoolhouse Rock compilation, describes this pivotal moment in history best:

"Though the next few years were rough
General Washington's men proved they were tough
Those hungry, ragged boys would not be beat
One night they crossed the Delaware
Surprised the Hessians in their lair
And at Valley Forge they just bundled up their feet!"
4. "Un Chien Andalou" was a short, silent independent film released in 1929 and created by Spanish director Luis Buńuel and artist Salvador Dalí. Its content was shocking - the first scene showed a man, a sharp knife, a woman in a chair, and an eyeball...I'll stop there. It shocked audiences like nothing else in cinema ever had. What is the English translation of this out-of-the-blue film?

Filmmaker Buńuel's intention with "The Andalusian Dog" had been to shock and offend the intellectual bourgeoisie, but, to his great surprise, audiences loved it. Later, film critic Roger Ebert indicated that "Un Chien Andalou" launched the independent movie movement.
5. Let's settle in on more modern times. No one expected the son of a sharecropper, grandson of a slave to be an Olympic gold medalist, but that's exactly what this man accomplished during the 1936 games. The Olympics were held that year in Hitler's Germany and Hitler was expressing his view that "Aryan" people were superior in every way. Enter our hero, an African-American who had already set world records. Who was this amazing track and fielder?

Jesse Owens was the first American track-and-field athlete to win four gold medals within one Olympiad. When the world was highly segregated, Jesse discredited Hitler's theory of "the master race" and proved that anything can happen.
6. Pearl Harbor, December 7th, 1941. The morning attack on the U.S. Naval base was a huge shock for the United States, especially since Japan had not declared war on the country. It marked a turning point in the world war but it took many years and many losses until the end. Then-President Franklin Delano Roosevelt declared that December 7th would be "a date which will live in _______." What word did he use in this first line of this famous speech?

President Franklin D. Roosevelt: "Yesterday, December 7, 1941 - a date which will live in infamy - the United States of America was suddenly and deliberately attacked by naval and air forces of the Empire of Japan." Japan and the U.S. had been in disagreement over Japan's aggression toward China, but no one on U.S. soil expected an attack from Japan, especially one on this scale.
7. When beloved U.S. President Roosevelt died in office in April, 1945, Vice President Harry Truman had to step into big shoes immediately. With a world war raging, it was not an easy task, and not even his own Democratic party was sure Truman should run for President at the next election. He did, though they and everyone else were certain a handsome young Republican candidate would win by a landslide. One newspaper was so certain, it announced the results of the election too early. What did this famous headline say?

On November 3rd, 1948, "The Chicago Tribune" published the headline "Dewey Defeats Truman." But Truman, defying all odds, had won. Toward the end of the campaign, he and his family hit the road on a "whistle-stop campaign" - they traveled by train in a Pullman car and stopped to talk with thousands of ordinary people across the country. It made the difference. The photograph of Truman holding "The Chicago Tribune" that day is iconic.
Thomas E. Dewey.
8. Eric Moussambani never expected to be in the Olympics. A native to a teeny tiny west central African country, Eric was an overall good athlete, but he hadn't even been in a swimming pool when he heard of an opportunity to represent his country in the Olympics via a special wild-card program to encourage developing countries to participate. He signed up, and taught himself to swim. When the time came to compete, Eric just hoped to be able to finish before tiring out. But when his two opponents were disqualified for false starts, Eric found himself the only competitor in the race. All he had to do was finish. With the Australian crowd cheering him on, with a swim stroke reserved usually for the community pool, Eric Moussambani completed the run. He didn't win a medal, but he won the admiration of fans and represented his country proudly. What is the name of Eric's tiny home country? Hint: It sounds like it's on the Equator, but it's not.

Eric Moussambani was born in Equatorial Guinea, a small country near Cameroon. After the Sydney Olympics, he continued to train hard, but was not allowed to complete in 2004 in Athens because of a problem with his visa. In March 2012 he was appointed coach of the national swimming squad of Equatorial Guinea.
9. "A mountain of evidence," including DNA, hair, and blood, yet this former athlete was found not guilty of murdering his ex-wife and her friend. Sure, the defendant's legal team, lead by flamboyant attorney Johnny Cochran, did a good job, but there was so much evidence, you'd think the case was a slam dunk. But it wasn't, and the jury found the defendant not guilty. Who was this former athlete and murder suspect?

O.J. Simpon was found not guilty in his criminal trial in 1995, but was found responsible for ex-wife Nicole Brown Simpson's death in a civil suit in 1997. Polls showed that reactions to the criminal verdict were split down racial lines, but legal scholars have indicated that it was indeed a surprising outcome no matter which side you were on.
10. The Jamaican national bobsled team debuted at the 1988 Winter Olympics in Calgary, Alberta. They were considered underdogs from the beginning -- they had virtually no experience with bobsleds, their country never sees snow, and they didn't even have their own sleds. Their players' positive attitudes made them popular even with the other teams, who loaned the Jamaican athletes equipment. They didn't win, and in fact couldn't even finish their events, but they were the surprising favorites that year. In 1993, Walt Disney Pictures released a movie based on the team. What was the movie called?

"Cool Runnings" came out in 1993 and has over 70% positive reviews on the Rotten Tomatoes website. In 2014 the Jamaican bobsled team qualified for the 2014 Winter Olympics in Sochi, Russia referring to themselves as "Cool Runnings, The Second Generation."
Source: Author PootyPootwell 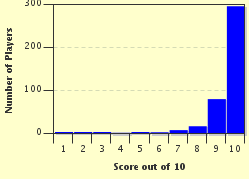 
Other Destinations
Explore Other Quizzes by PootyPootwell