You'll be given a year plus a key word for a major event of that year. What you need to do is pick a pseudo headline that best matches that event and year.

The famous "Houston, we've had a problem" was from this ill-fated 3rd lunar landing attempt. On the way to the moon, 205,000 miles from earth, an electrical problem caused a small explosion in an oxygen tank. The question now was not how they would land on the moon but how they would get home.
2. 1971: Kurt Waldheim

Kurt Waldheim was appointed Secretary-General of the United Nations for a five-year term beginning on January 1, 1972. He replaced U Thant.
3. 1972: Summer Olympics in Munich

Eleven Israeli athletes were killed by Palestinian terrorists in an attempt to have 234 Arab prisoners held in Israeli jails released.
4. 1973: The Sting


Answer: And The Oscar Winners Are ...

'The Sting' starring Paul Newman and Robert Redford cleaned the floor at the '73 Oscars with 7 awards including the big three - Best Actor, Best Director and Best Film.
5. 1974: 410-4

February 6, 1974, The House of Representatives voted to authorize the House Judiciary Committee to investigate whether or not grounds existed for the impeachment of President Nixon over the Watergate scandal. After a lengthy investigation Nixon resigned from office on August 8, 1974, the first president to do so.
6. 1975: Cold War Docking

The American Apollo Spacecraft and the Soviet Soyuz successfully docked while in earth orbit in July 1975. It was the first co-operative space mission between the two super powers since the 'race for space' began two decades earlier.
7. 1976: The Viking

The Viking 1 and 2 landers dropped in on Mars in 1976. Their prime experiment was to test the soil for signs of micro-organisms. The results of these experiments are still hotly contested in the scientifc community.
8. 1977: Haley

'Roots,' the Alex Haley mini-series hits world TV sets and attracts 80 million viewers. It surpassed 'Gone With The Wind' as the highest rated program ever broadcast. 1977 can also be remembered by the loss of Elvis Presley, Bing Crosby and Charlie Chaplin.
9. 1978: Hustler

"Hustler" magazine creator Larry Flint was shot outside a Georgia courthouse by a right-wing sniper and was permanently paralysed. 'The Hustler' the movie originally released in 1961.
10. 1979: Meltdown

March 28, 1979. A cooling glitch resulted in the overheating of a nuclear reactor and a subsequent minor radiation leak followed. Although the partial meltdown had no proven adverse affect on anyone, it led to a large increase of distrust for nuclear energy by the American public.

The Chernobyl meltdown in 1986 was far more severe killing 30 people instantly and causing the evacuation of 130,000 people from the neighbouring area. Russian submarine K19 had a partial meltdown in 1961. Sailors went into the reactor room to fix the cooling system and within a few days, eight were dead.

Another six died over the following years due to the radiation exposure.
Source: Author bertho 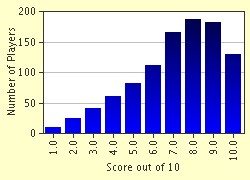 Related Quizzes
This quiz is part of series Child of the 1970s:

For those of us who lived through the 1970s.


Other Destinations
Explore Other Quizzes by bertho