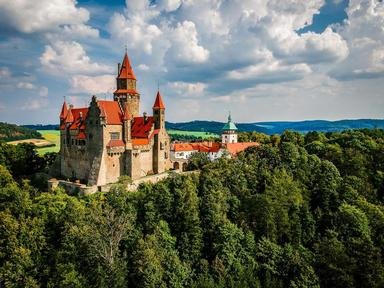 The history of the world is full of stories about conflicts - and the 17th century was no exception. Can you match the date, which may mark the beginning OR the end of the conflict, and those involved with the correct conflict?

Also known as the Thirteen Years' War or the Fifteen Years' War, the Long War was fought between the Habsburgs of Austria and Ottoman Turks and their various allies from 1593-1606. Religious animosity, as well as border disputes, seem to have been the major cause, but by the end of the war it was apparent that the Ottoman Turks would not be able to spread their influence into the Habsburg Empire, and that the Habsburgs would not be able any longer to effectively control Transylvania, which staged an uprising during the last phase of the war.

The Peace of Zsitvatorok in 1606 ended the conflict, with the Ottomans gaining three Habsburg forts, and returning the region of Vac, which today is a town in Hungary.
2. 1601, Russia

What a terrible mess! The last tsar of the Rurik Dynasty was dead without an heir. False heirs periodically tried to take over the throne. There was a famine that is estimated to have killed a third of the population. The nobles could not agree to get along or choose a new leader.

Hermogenes, the Orthodox Patriarch, had been imprisoned. The Poles occupied the Kremlin, while the Swedes occupied Novgorod. Finally, the Grand National Assembly elected Michael Romanov to be the new tsar. He was related by marriage to the Rurik Dynasty and was able to unify the people and make peace with both Poland and Sweden by 1617.

The Romanov Dynasty went on to rule Russia for over three hundred years.
3. 1618, Prague

In Prague's history, there have been two Defenestrations - one in 1419 and one in 1618. Defenestration means that people were thrown from a window! Religious tensions between Protestants and Roman Catholics appear to have led to the people being defenestrated. Bohemia, the area where Prague was located, was traditionally a Protestant stronghold, even though it was part of the Catholic Habsburg Empire; the Habsburg leaders practiced religious toleration and even allowed the Protestants of Bohemia to established a state church until the death of Rudolf II in 1612.

His successor, Matthias, who had no children, chose his Catholic cousin, Ferdinand, to be his heir. Ferdinand cared little for earlier promises that had been made to the Protestants of Bohemia. An argument over the building of Protestant chapels on royal land led to the incident, where Protestants defenestrated two of the Emperor's regents and their secretary.

This incident is said to have been one of the causes of the subsequent Thirty Years' War.
4. 1618, Protestants and Catholics

Though the Thirty Years' War was fought by many countries for many reasons, the root of the conflict was religious differences. It is believed to have begun due to the actions of Ferdinand II of Bohemia, the future Holy Roman Emperor, who tried to impose strict Catholic rule over the Protestants of Bohemia. Both Austria and Bohemia rebelled, and even though Ferdinand was able to claim a victory in the initial conflict five years later, many of the powers of Europe became involved in a war that was fought primarily in the Holy Roman Empire.

It is estimated that 20% of the population of Germany at the time became casualties of war, not to mention problems which caused the disruption of farming and trade. The end of the war saw the balance of Europe change. Spain had lost the Netherlands, which became an independent country, and France became more powerful. Sweden had control of the Baltic region, and the Holy Roman Empire lost much of its power and prestige and had to accept that its members states were sovereign for most purposes.

The Treaty of Westphalia ended the war in 1648, and is considered to have signaled the end of wars of religion in Europe.
5. 1620, Polish-Lithuanian Commonwealth and Ottoman Empire

The Polish-Ottoman War took place from 1620-21 over control of the area now known as Moldavia. Moldavia had been under the control of first the Kingdom of Poland, and later the Polish-Lithuanian Commonwealth; the Ottoman Empire, however, had included the area within their sphere of influence. Control of Moldavia, along with the fact that the Cossacks from the Polish-Lithuanian Commonwealth were raiding the Ottoman Empire, and rebel leaders from Bohemia had requested Ottoman help at the beginning of the Thirty Years' War, led to conflict between the two groups.

The peace treaty at the end of the conflict really didn't provide for any land exchanges, but the Commonwealth did agree to end their intrusions into Moldavia.
6. 1639, Scotland, Ireland, and England


Answer: Wars of the Three Kingdoms

Also known as the British Civil Wars, the Wars of the Three Kingdoms was fought between 1639-1651. Part of the difficulty came from the religious conflicts that came into being as the result of Henry VIII's Reformation in England. Many believed that the people should have the freedom to choose their religion, but the truth of the matter was that any church other than the Church of England was barely tolerated.

Another issue was the quarrel over the power of the monarch. How much power should the king have and should he be controlled at all by Parliament. Finally, Scotland and Ireland had an opportunity to revolt against England. Why not take the chance that it could work? With the execution of Charles I, Oliver Cromwell became Lord Protector.

He allowed Protestants to have religious freedom, but not Catholics. He dismissed Parliament as the Stuarts had, and brought an end to the revolts in Ireland and Scotland with a vengeance. During the Restoration, however, politics and religion returned to the status quo before the war. Once again England, Scotland, and Ireland were under the control of a king - Charles II. Ireland and Scotland were both allowed to re-establish their Parliaments.

Many issues, however, continued to be sore points until the Glorious Revolution.
7. 1640, Spain and Portugal

Also called the Portuguese Restoration War, the Acclamation War lasted from 1640-1688. The death of Philip II of Spain led to some changes in the way Spain governed Portugal. In fact, the Portuguese rebelled when they believed that Philip III wanted to make Portugal a Spanish province.

A group known as the Forty Conspirators began the revolution. However, it was an act that was generally supported by the Portuguese people. King John IV of Portugal was crowned at a time when Spain was rather preoccupied with the Thirty Years' War.

Although the war lasted for 28 years, it mainly consisted of border skirmishes until the final years of the conflict, when Portugal was able to claim the victory. The Treaty of Lisbon in 1668 concluded the war, when Spain was forced to recognize the claim of the Portuguese monarch.
8. 1642, Roundheads and Cavaliers

The religious issues in England that began with the Reformation were not put to rest with the church reforms of Elizabeth I. Her successor, James I, had been financially extravagant and therefore at odds with Parliament from time to time, but he had provided for the translation of the King James Bible and managed to prevent conflict with Parliament getting out of hand.

Not only that, but he was a Protestant, and had married a Protestant, Anne of Denmark. His son, Charles I, on the other hand, found resistance in Parliament to his marriage to a Roman Catholic princess, and he also encountered opposition to his appointment of William Laud as Archbishop of Canterbury.

In addition, Charles I did not get along with Parliament, especially over the issue of taxation. Civil war broke out between the Royalists, called Cavaliers, and the Roundheads, led by Oliver Cromwell, who carried out the execution of Charles I in 1649.

After a period of unpopular rule by Cromwell and his son, Parliament moved to restore the son of Charles I, Charles II, to the throne of England.

Not only that, but Parliament issued a decree that said that Charles had been the rightful king since the day his father had been executed. In other words, it did away with the time of the Interregnum, from the death of Charles I to the return of Charles II, as if it had never happened! The result of the civil war? Parliament emerged stronger than the king - but it would take a Glorious Revolution before the monarch would understand!
9. 1645, Venice and Ottoman Empire

Venice and the Ottoman Empire, along with their allies, were constantly at war; in fact, the Cretan War, or the War of Candia, fought from 1645-1669, is also called the Fifth Ottoman-Venetian War. Candia was the most important Venetian fortress on Crete, and the capital of the island at the time.

The war was fought almost exclusively on Crete, however, some engagements did occur in Dalmatia. After losing the island of Cyprus to the Ottomans during the Fourth Ottoman-Venetian War, Crete was Venice's last important overseas possession, however, the forts on the island were poorly maintained, and the fertile land was highly prized.

The conflict began when Ottoman ships were attacked by the Knights of Malta, an action the Ottomans believed was supported by Venice.

As the result of the peace agreement, Venice gained territory in Dalmatia, but also lost Crete, as well as men, money, and other resources.
10. 1648, Cossacks and Polish-Lithuanian Commonwealth

From 1648-1657 the Cossacks who lived in the Ukraine staged a rebellion against the Polish-Lithuanian Commonwealth, which had been absorbing territories that had been part of Ruthenia, or Kievan Rus'. The people who lived in Ruthenia were then subjected to rule by the Polish szlachta, or privileged upper class, who practised Catholicism. Led by Bohdan Khmelnytsky, the Cossacks, who had allied themselves with Crimean Tatars and local peasants, ended Polish control of the area.

The group was pretty ruthless, killing many of the Polish people who lived in the territory, as well as Jews who had served as Polish representatives; the Polish army, however, was equally brutal. Finally the influence of the Polish-Lithuanian Commonwealth was purged from the Ukraine, and the Slavic people who lived in the eastern Ukraine were incorporated into the Tsardom of Muscovy, with the Cossacks swearing allegiance to the tsar.

At the same time Poland was attacked by neighbouring states, in particular Sweden and Brandenburg.

The result was invasions referred to as 'The Deluge'. Poland managed to reassert itself but its decline as the leading regional power had begun.
Source: Author ponycargirl 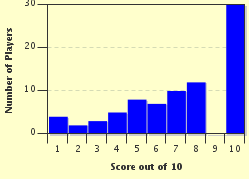 Related Quizzes
This quiz is part of series Europe in the 17th Century:

These quizzes were written for Week 1 of History Month 2017.