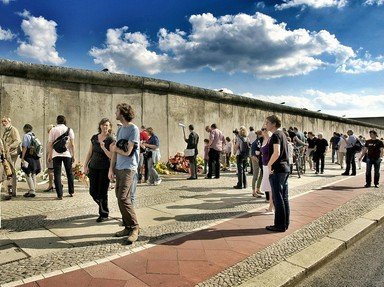 The Rise and Fall of the Berlin Wall Quiz

I haven't been able to find any quizzes specifically on the Berlin Wall. I was in Berlin for the fall of the Berlin Wall, and it was the most amazing experience of my life!

Quiz Answer Key and Fun Facts
1. In which year did construction begin on the Berlin Wall?

Construction began on the Berlin Wall in the early hours of Sunday, August 13th, 1961. By the morning of Tuesday, 15th August, East Berlin was closed off - initially by barbed wire and various obstuctions, and remained so for the next 28 years. Most of the concrete wall took some weeks to build.
2. Which was the most famous crossing point through the Berlin Wall?

Checkpoint Charlie was the border checkpoint on Friedrichstrasse, which opened 10 days after East Berlin was sealed off. Those allowed to use this checkpoint included military from the Western Powers, foreign tourists, and diplomats. The sign from Checkpoint Charlie which reads 'You are leaving the American Sector' in English, Russian, French and German (with German being in tiny print at the bottom) still stands at the point, together with a replica of a guard's hut and the sandbags surrounding it.

There is also the Checkpoint Charlie museum around the corner, which is absolutely fascinating. The actual Checkpoint Charlie was removed on June 22nd, 1990 ("www.dailysoft.com").
3. Which "war" is associated with the Berlin Wall?

The Cold War is associated with the Berlin Wall because it was the war between the Soviet Bloc and the West. As the Cold War came to an end and the Communist States were crumbling, the Berlin Wall was torn down. The Iron Curtain was also started to open when Hungary opened her borders to Austria early in September 1989.
4. When was the 'second wall' built?

In June 1962 a second wall was built to prevent people escaping to the West. This was then further strengthened by a third wall in 1965, and yet again by a fourth wall in 1975.
5. People were desperate to escape across the Wall -- How many people died trying to cross the Wall while it was still standing?

This information comes from my visit to the Checkpoint Charlie Museum in 1992. (I still remember because it made such an impression on me at the time, that people would run such a real risk to their lives, just to get away from a political regime).
6. Which of these methods did people use to escape across the Berlin Wall?

The handmade air-balloon was made by the families Wetzel and Strlzyck. They made it too, but after this rationing was placed on all nylon cloth. The tunnel in the graveyard was discovered by a woman who fell into the hole and accidentally left her baby behind, where it was found by guards at the mouth of the tunnel (oops).

Many, many people tried to dodge the guards, and paid for it with their lives. This infomation comes from "www.berlinwall.itgo".
7. What prompted thousands of East Germans to go to the Berlin Wall on the night of the opening, forcing the borders to open peacefully?


Answer: A misleading statement made by an East German official saying that the borders were to be opened immediately

After several weeks of demonstrations in East Germany focusing on the right to travel freely, the East German government had decided to issue East Germans with exit visas (that is, permission to leave the country) more or less on demand. However, the East German Communications Director, Günter Schabowski, made the announcement in a way that suggested that everyone had an immediate right to leave.

At 18:57 (or thereabouts) Schabowski answered, 'Well, straight away, immediately'. This was caught on camera as thousands flocked to the wall. By 22:30 the gates were opened and the Wall had fallen.
8. Does any of part of the Wall still stand today?

A rich West German bought a small section of the Wall and a guard tower and has kept them (together with all their graffiti) behind wire to forever preserve them and remind us never to go back.
9. How is the line where the Berlin Wall used to stand demarcated in the centre of Berlin, on the Potsdamer Platz?


Answer: By a double row of paving stones

In other parts of the city the line is generally marked by one of the other alterantives given - and in some places not at all. It is really interesting to stand under the Brandenburg Gate (Brandenburger Tor) and look from East Germany into West Germany - the differences are stunning, even many years after the "Fall of the Wall". (I last did this in 2002, on the 13th anniversary of the Wall falling.)
10. On which date did the Wall fall?

As I said in my introduction, I was there when this happened. My father took us on a trip to Berlin. By chance, the Wall fell on the second night of our stay. Being only 9 at the time, I didn't really understand the politics behind this, but the emotion was so real to everyone that it made it the most memorable time of my life, and I now try to go back for the anniversary at least every 2 years, partly to see the changes in Berlin (it isn't nicknamed the 'construction site of Europe' for nothing!) but also to be there when everyone is remembering November 9th, 1989.
Source: Author anneliesj 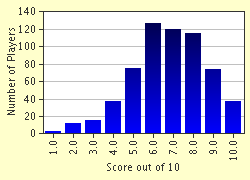 
Other Destinations
Explore Other Quizzes by anneliesj