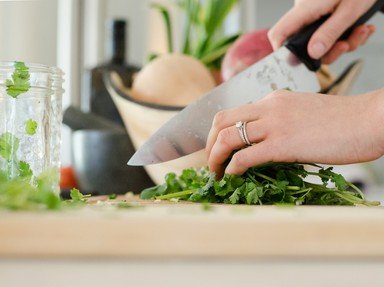 Even when speaking English, chefs use a language peculiar to the kitchen. How many of these cooking terms do you know well?

Quiz Answer Key and Fun Facts
1. When a chef juliennes a fruit or vegetable, the results look like which of the following?

To julienne is to cut into small stick-like pieces, usually with a knife but also with a mandoline. The French culinary term probably derives from a woman's name but nobody knows who the eponymous Julienne was.
2. When apples or potatoes are peeled and sliced, the bits will turn brown if not used immediately. To prevent this, they may be soaked in water mixed with lemon juice or white vinegar. What is this preventative measure is called?

The acid in the lemon juice or vinegar prevents the freshly-cut food from oxidizing through exposure to the air.
3. Slightly underripe fruits can be improved for service by maceration. What does macerate mean?


Answer: To soften by soaking or steeping in a liquid such as alcohol or with sugar

The term macerate derives from the Latin "maceratus" (the past participle of "macerare") meaning "to soften."
4. Most kitchens are equipped with at least one paring knife. What does "pare" mean?


Answer: To remove the peeling or outer skin of a fruit or vegetables with a knife

This term entered English from the Old French where it meant something like "to prepare by trimming." At least as much paring is done in the modern kitchen with a specialized gadget called a peeler or scraper as is done with a paring knife.
5. Especially in a hectic kitchen, cooks must not display their temper. On the other hand, tempering an egg is a desirable process. What does tempering mean, in the latter sense?


Answer: To slowly add a bit of a hot liquid to beaten eggs

The temperature of beaten eggs is slowly raised by adding small amounts of a hot liquid to them before introducing the eggs to remainder of the hot liquid. This protects the eggs from shock (produced by a sudden change in temperature) which has the effect of scrambling them.
6. When a recipe directs a cook to pulse food, what should the cook do?


Answer: Turn the blender or food processor on and off rapidly

This verb entered the culinary lexicon with the advent of blenders and food processors.
7. The chef hands you a bunch of basil and asks you to prepare a chiffonade. What should you do with it?


Answer: Stack and then roll the leaves. Cut them into the thinnest possible strips.

Chiffonade is a word which works both as a verb (for the slicing process) and a noun (for the resulting shreds). Chiffonades are commonly used as garnishes.
8. When meat is browned in a pan, bits of caramelized juices (called fond) remain in the pan. These may be dissolved in a liquid (such as wine, water, stock or vinegar) to form the basis for a sauce. What is this process called?

This culinary term is sometime spelled "deglace" to reflect its origin in the French verb déglacer which means, literally, "to melt the ice from." The result is intensely flavourful.
9. Blanche, as a woman's name, means white or pure. What does blanch mean as a culinary term?


Answer: To partially cook food in steam or boiling water and then plunge it in ice water

Stopping the cooking process with ice water is useful in preserving the bright colour of the food.
10. When vinegar or citrus juice is whisked into oil to form a thickened liquid, what is the resulting combination of ingredients called?

Liquids which do not mix are said to be immiscible. An emulsion occurs when two such liquids are temporarily combined, as in milk and cream, salad dressing and cake batters.
Source: Author FatherSteve 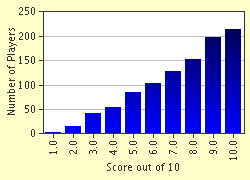 Related Quizzes
This quiz is part of series Cooking Terms:

The language of the kitchen can be specialized and opaque; these quizzes test one's knowledge of that culinary dialect.