After graduating from Fairy God Mother College, Goldilocks's parents presented her with a two week, all expense paid trip to The Kingdom of Far, Far, Away.

Quiz Answer Key and Fun Facts
1. Goldilocks checked into her room at the "Enchanted Castle Hotel" about 7:00 P.M. and decided to have something to eat. The first place she went to was "Pinocchio's Diner". Goldilocks was given a menu by the waiter and offered a complimentary drink. She decided to have the evening special of 'Fried Crickets' with ranch sauce and a vegetable salad. For her drink, Goldilocks told the waiter "I'll have 'The King of Beers'". What beer did the waiter bring her?

Budweiser beer was originally invented in the 1245 by King Ottokar II of Bohemia. After a trip to the region in 1876, Adolphus Busch and liquor importer Carl Conrad developed their Bohemian style beer and sold it in the U.S. Budweiser's been known as the King of Beers since it's inception.
2. The next day, Goldilocks shopped for a gown and slippers for a ball that was to be held on Saturday. That evening she stopped at "The Three Bears Bar & Grill" for something to eat. After being seated, the waiter gave her a menu. Goldilocks ordered the porridge because she knew that on Wednesday the porridge would be not too hot, not too cold, but just right. The waiter asked Goldilocks what she would like for her complimentary drink and Goldilocks said "Just give me 'The Champagne of Beers'". What beer did the waiter bring her?

Miller Brewing Company was founded by Frederick Miller in 1855. Miller High Life Beer hit the market in 1903. The slogan, 'Champagne of Beers', has been on the packaging from the beginning.
3. The next day, Goldilocks went to 'Rumpelstiltskin Jewelers' to buy a tiara to accent her gown. Across the path was "The Ugly Duckling Lunch Box" so she decided grab a quick lunch and then continue shopping. The waiter seated her and handed her a menu. The afternoon special was 'Buffalo Swan Wings' and fries. The waiter asked Goldilocks if she would like a complimentary drink with her lunch and Goldilocks replied "I'd like a beer 'From The Land of Sky Blue Waters'". What beer did the waiter bring her?

In the 1960s, the Hamm's beer commercial featured the animated character called 'The Hamm's Bear'. He would dance around with a feather on his head while Indian tom-toms would play and the slogan was sung.
4. The next evening Goldilocks went to "Robin Hood's Steakhouse". Being ladies night, she figured she might have a good time. She made her way close to the main stage so she could watch Robin Hood and his Merry Men do their dance routine. The waiter told Goldilocks that 'Leg of Mutton' and the 'King's Deer Filet' were that night's specials. Being a weight watcher, Goldilocks chose the 'King's Deer Filet'. When asked what she'd like for her complimentary drink, she replied "I'll have the beer that's 'Brewed with Pure Rocky Mountain Spring Water'". What beer did the waiter bring?

Coors beer is a Pilsner beer first made in Golden, Colorado in 1873 by German immigrants Adolph Coors and Jacob Schueler. Coors limited sales of the beer to mainly western states for most of it's history. This made the beer a 'must have' for people in the east.

The popularity and interest of the beer rose in 1977 because the beer was featured in the plot of the movie "Smokey and the Bandit".
5. Saturday morning arrived and Goldilocks realized that she needed a pair of shoes for the ball. She went to "Little Old Lady Who Lived in a Shoe Shop" to buy a pair. The salesperson was a little girl named Dorothy and she sold Goldilocks a pair of ruby slippers that matched her gown. At the ball there was pretty much anything to eat and drink for free, so she grabbed a sandwich and grabbed a Mexican beer that is 'Miles Away From Ordinary'. It also had a wedge of lime sticking out of the top of the bottle. What Beer did Goldilocks grab?

Corona Extra is a pale lager produced by Cervecería Modelo in Mexico. Corona has been the main sponsor of the LPGA Tour tournament Corona Championship, and of the NASCAR Corona Series in Mexico. The beer is almost always served with a garnish of lime. Corona Extra is the top selling imported beer in the U.S.
6. After a couple of days of sight seeing Goldilocks felt like having seafood for a change and went to a place called the "Hickory Dickory Dock". That night's specials were 'Little Mermaid Filets' or the 'Sebastian Crab Sandwich'. Goldilocks decided on a sea food salad instead. When the waiter asked what she would like for her complimentary drink, Goldilocks said "Bring me 'Germany's Fun Loving Beer'. What beer did the waiter bring her?

St. Pauli Girl beer is manufactured by the St. Pauli Brauerei inside the Beck's Brewery. The label for the beer is one of the most recognizable and sexiest of all beer labels. The label always depicts a well endowed blond girl in traditional German garb. Every year since 1982, St. Pauli Girl Beer picks a new model to represent their product.
7. The next evening Goldilocks went to a place called "Maleficent's Hidden Cabin". The place was beautiful with lots of mirror mirrors on the wall. The special for that night was 'Waldwarf Salad' and a slice of 'Poison Apple Pie'. Goldilocks ordered the salad but told the waiter to hold the pie. When the waiter asked Goldilocks what she would like for her complimentary drink, she replied "I'd like 'The beer that made Milwaukee famous'". When Goldilocks sipped her beer, she told the waiter it was the wrong beer. The waiter apologized and said they were out. Goldilocks replied "When you're out of ______, you're out of beer". What beer was out of stock at the bar?

The beer company was founded in 1858 by August Krug in 1849 and acquired by Joseph Schlitz in 1858. The Pabst Brewing Company acquired the Schlitz brand in 1999.
8. Two nights later, Goldilocks went to "Snow White's Supper Club". She had heard of the place from her high school friend Rapunzel. Rapunzel had told her that she couldn't stand the owner because she was so stuck on herself and all the prince's in the neighborhood drooled all over her. It took a long time to get waited on because all the waiters were busy flirting with the owner. When one finally came by to take Goldilocks's order, she just told him that she'll have 'Green Eggs and Ham'. When waiter asked if she would like a free drink, Goldilocks replied "Give me what the folks down under say is 'Australian for Beer'". What beer did the waiter bring?

Foster's is an Australian brand of lager. It was created in Melbourne in 1886 by William M. and Ralph R. Foster. Here in America we think of Foster's as the quintessential Australian beer, but in Australia, it doesn't even rank in their top three.
9. The next day, Goldilocks ran into her friend Rapunzel and they decided to go to a place called "Little Red Riding Hood's Kitchen". It happened to be karaoke night and after Rapunzel sang a few tunes from the musical "Hair", they decided to have something to eat. The special was called 'Grandma's Basket of Goodies" and contained a lot of good low-cal foods. The waiter was a somewhat elderly bearded fellow who spoke with an accent. He asked the girls what they would like for a complimentary drink and they said "Just bring us anything". When the waiter left to get the drinks, Goldilocks looked at Rapunzel and said "He's the most interesting man in the world". When the drinks came the waiter set the beers down and said "Stay thirsty my friends". What beer did the waiter bring?

The Dos Equis ad campaign featuring "The most interesting man in the world" began in 2006 and starred foreign actor Jonathan Goldsmith. Goldsmith had been an actor for over forty years but only became famous after he started doing the Dos Equis commercials. In the ten years Goldsmith played the part of the most interesting man in the world, Dos Equis sale in the U.S. rose 22%.
10. When Goldilocks returned home from her trip, her mother had all of Goldilocks's favorite food ready for her. After they ate, Goldilocks's father handed her a bottle of 'The beer that tastes as great as it's name' and made a toast. "Here's to my little girl, and may you live long and live happily ever after". What beer did Goldilocks's father give her? 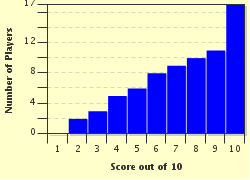 Related Quizzes
This quiz is part of series Bigjohnsludge's odds and ends III:

Filling the gaps with mixed quizzes


1. Journey to the Center of the Earth Average
2. I Didn't Know They Invented That! Easier
3. The Trouble With Worm Holes. Where Was I? Easier
4. Goldilocks and the Free Beers Average
5. Super Hero Before & After Average
6. Toons, Toons, and More Toons Easier