This quiz title was sent to me as a "Challenge" so never having seen the TV Show, and it being tea-time when it arrived, these "surgically produced, meat based dishes" were the result...

Quiz Answer Key and Fun Facts
1. What could be more delicious on a hot summer day than a lovely bowl of ice cream? A passing cosmetic surgeon suggests we try 'Eskimo ice cream', made with his own fair hands by performing a bit of liposuction. Which animal provides the fat that is the main ingredient of Eskimo ice cream?

Eskimo ice cream, called 'akutaq' or 'akutuq' in the Inuit language, is made of reindeer fat, seal oil, berries, and freshly fallen snow. Traditionally it was a special celebration food, and versions made today can also contain refined sugar and 'crisco' shortening.
2. A traditional dish served in Cologne, Germany, is called "Himmel und Erde", which translates as "Heaven and Earth". This delightful plate consists of apple sauce, mashed potatoes, and something else. Which of the following specialist medics would we need to help us produce "Blutwurst" to complete our dish?

A haematologist deals with disorders of the blood.
"Blutwurst", or blood sausage/pudding, is more usually called "black pudding" in the UK. In Berlin, hot Blutwurst served with liverwurst and potatoes goes by the delightful name of "Tote Oma" or "Dead Grandma"...
3. We enlist the help of an endocrinologist to help us find this delicacy. The "heart" ones are more highly prized than the "throat" ones, but all are delicious when soaked in salt water and then lightly poached in milk. Often served grilled in Latin America, what am I describing?

Sweetbreads are the thymus glands of lambs, pigs or cows. The thymus is located in the neck of the animal 'owner'. Because the "heart" ones are said to taste sweeter, they are more expensive than "throat" ones, even though they are all technically part of the same gland.
A human thymus is behind the breastbone, in the chest cavity.
4. A very expensive delicacy now. Available in red or black, depending on the 'donor' species, and popular in Russia, which luxury foodstuff would a passing gynaecologist help us procure?

In 2007, obtaining black caviar from sturgeon was banned in Russia, in a bid to allow fish stocks to recover from over-production. Black caviar is roe (eggs) of the sturgeon, and red caviar comes from salmon.
It is possible to "milk" the fish of the caviar without harming it, thus allowing it to live and produce more, but this is a quite rare practice as few producers know how. Caesarian section can also be used to get at the caviar without killing the adult female fish.
Although these methods may seem to be hard on the fish involved, traditional methods of collecting caviar involved killing them, usually by a blow to the head.
5. A passing brain surgeon helps us get a lovely plateful of 'head cheese' for our lunch time sandwiches. Traditionally, 'head cheese' was a "peasant dish" eaten by poor farmers and workers. It has many different names in different countries, and is made from the meat of the head of an animal, including the brain, ears, and tongue. It may also include various seasonings, as well as the feet and heart of the animal. How is it known in the UK?

Head cheese is known as "tęte fromagee" in France, "Sulz" in Germany, and "cabeza de jabali" in Spain. The Spanish name translates literally to English as "head of the boar".
In the Caribbean particularly, head cheese is pickled in a mixture of lime juice, water and vegetables, and is known as "souse".
6. An osteo-surgeon could help us get our delicious portion of "cuisses de grenouille", but we should be aware that this dish is actually beginning to cause concern for the future of some species of frogs; so many are now consumed that there is a danger of them being "eaten into extinction". Frog's legs are usually associated with French cuisine, but which country exports the most?

Although most people tend to think of frog's legs as a French dish, they are also eaten in Asia. Anywhere up to 200 million frogs are prepared as food each year, and consumption has increased rapidly in recent times.
Indonesia alone exports over 4500 tons each year. The main importers of frog meat are France and the USA. France imports anything up to 4000 tons a year.
7. Spoiled for choice now, we are offered four different dishes to try. Which of these four would NOT need a podiatric surgeon to help us prepare it?

Crispy chicken feet are a popular snack food in the Far East, and are exactly as the name suggests, crispy deep fried chicken's feet.
Calf's foot jelly was often used as a 'tonic food' for invalids in years gone by. It is made by boiling up the feet with gelatin and sometimes flavourings such as sugar, lemon, or seasonings.
Pig's trotters can be cooked in a variety of ways; boiled in a soup or stew, the meat can be removed and fried, or breaded and baked in a casserole type dish.
Coltsfoot is a plant, Tussilago farfara. It has traditionally been used to help cure coughs, oddly enough by smoking it! It can be eaten in a salad, pie or tart too, and lotion made from the flowers has been used to treat various skin conditions.
8. Which of these medical specialists would be the most helpful in getting us a portion of the food which comes in varieties known as Bible, blanket, green, reed, honeycomb, and pocket?

All the names listed are used for various varieties of tripe. Most tripe comes from the rumen, the omasum, and the reticulum; three of the four chambers of a cow's stomach.
The fourth chamber, the abomasum, is the source of reed tripe, but this is not eaten as often as it is made of different tissues and has a much tougher texture.
Green tripes are those which still have some of the stomach contents on them, and are generally unfit for human consumption. They are often used in pet foods.
As well as from cows, tripes can also be obtained from the stomachs of pigs, goats, and deer, and are eaten all over the world, often in soups and stews.
9. Which Scottish delicacy, subject of an ode by Robbie Burns, would be much easier to make with the aid of a gastrologist?

Haggis is made from the offal of a sheep, boiled up in its stomach for several hours. Haggis is traditionally eaten on Burns Night, 25th January. Served with "neeps and taties" (turnip and potato), the haggis is piped to the table by the bagpipes, and then 'addressed' by the host. After drinking a toast of scotch whisky, the haggis is then eaten. At the end of the night, the company will sing "Auld Lang Syne" together.
10. As far as I know, nobody outside of Hannibal Lecter would actually want to eat this dish, and the only medical help needed would be a psychiatrist or psychologist! What completes the title of the song "Dog's ___, Owl Meat, and Man Chop"?

"Dog's Eyes, Owl Meat, and Man Chop" is a song by the English folk band The Men They Couldn't Hang. It featured on their "Domino Club" album released in 1990. The words of the song are about Dylan Thomas and his homeland in Wales.
Source: Author Rowena8482

This quiz was reviewed by FunTrivia editor Leau before going online.
Any errors found in FunTrivia content are routinely corrected through our feedback system.
Most Recent Scores
Jan 08 2023 : rainbowriver: 9/10
Dec 20 2022 : Guest 69: 5/10 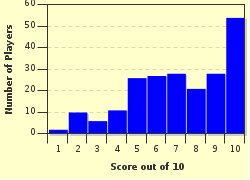 Related Quizzes
This quiz is part of series Commission #1:


1. Knock Knock, Who's There? Average
2. Grey's Anatomy - Animal (Food) Style Average
3. They Died With Their Beliefs On Tough
4. In a Pickle! Average
5. Moon Landings - Fact or Fiction? Tough
6. Behind Every Great Man is a Woman "Coming Out" Average
7. Music Hall and Vaudeville Average
8. Percussion: Beyond the Drums Average
9. Great Blunders Throughout History Average
10. Ouch! I Hurt My Head! Average
11. What Have the Romans Ever Done For Us? Tough
12. Seemingly Simple Jobs Tough