Hide away in my Trojan horse and let me take you on a journey around the "Hobbies" category to see whether you can answer all these horse related questions.

Quiz Answer Key and Fun Facts
1. "Ride a ____ ____ to Banbury Cross To see a fine lady upon a white horse With rings on her fingers and bells on her toes She shall have music wherever she goes". Which words are missing from this nursery rhyme?

A cock horse is an alternative name given to a hobby horse, which is a children's toy. The toy is simply made with a stick or pole, a sock, toy stuffing and material to make a horse's mane. With some vivid imagination, children can mount their toy horse and go wherever they like. The nursery rhyme "Ride a cock horse to Banbury Cross" was first published in 1784, and the term "cock horse" was thereafter used to describe toy horses.
2. H.O.R.S.E. is the acronym for a version of which popular card game?

H.O.R.S.E is a type of poker normally played at casinos. It involves playing a rotation of five different poker games using the initials included in the acronym. These are: H for Hold'em, O for Omaha, R for Razz, S for Stud, and E for Eight or better.
3. This uncomfortable looking bicycle shown in the image is otherwise known as what?

The dandy horse was brought to us by German inventor Baron Drais von Sauerbronn in 1818. Believed to be the forerunner to the modern bicycle, it had a saddle, handlebars and two wheels. The rider's feet were used to propel the bicycle forward. The Baron called the contraption his "Laufmaschine", which translated into English means "running machine", (and not "laugh machine!).
4. Devil on horseback is a savoury dish which consists of a pitted date wrapped in bacon. What is an "Angel on horseback"?

Devil on horseback is more common on a hors d'oeuvre menu than Angel on horseback due to the cost and availability of the oysters. Other delicacies seen on a finger buffet menu can include vol-au-vent, bruschetta, and pigs in a blanket.
5. What is the name for this piece of woodworking equipment more commonly used in constructing barrels and archery bows?

The shaving horse, or shaving bench, is a roughly constructed piece of equipment consisting of sections of wood made in to a horse-shaped bench, with a clamp which is normally operated using a treadle. The woodworker sits astride the horse and is able to shave wood into required shapes by operating the foot pedal.
6. Harrison Ford, John Travolta and Halle Berry were all born in the Year of the Horse. What are their main characteristics according to the Chinese Zodiac?

People born during the Year of the Horse are known to be strong-willed, quick-witted and headstrong, very similar to the characteristics portrayed by their animal counterpart. Harrison Ford (b. 1942), John Travolta (b. 1954) and Halle Berry (b. 1966) were all born in the Year of the Horse. Other notable people born during the same period were Louisa May Alcott, Teddy Roosevelt, Sir Isaac Newton and Genghis Khan.
7. Which is the only piece on a chess board that can jump over other pieces?

The knight is the only chess piece which can jump over other pieces. If an enemy piece is in its destination square, the knight can seize that piece. The knight moves in the formation of the letter "L" by moving two squares vertically and one square horizontally, or two squares horizontally and one square vertically.
8. The horse stance in Asian martial arts is also known by what name?

Mabu is a training stance named because it resembles the crouching position of a person riding a horse. The stance will help to develop strength, balance and control. Other training stances include the crane, elephant and kick knee.
9. Armoracia rusticana looks innocent in appearance, but its roots contain a fiery condiment used in cooking. What is its more common name?

Horseradish is from the Brassicaceae family which is also home to the cabbage and mustard plant. The plant is indigenous to parts of Europe and Asia, and this reflects on the roots commonly eaten in that part of the world. The thick white roots do not give off any aroma when they are dug from the ground. It is only when they are cut into that they release a potent enzyme.
10. Horseshoes is a popular outdoor game with official rules governed by the NHPA. What do these initials stand for?

The first horseshoe throwing competition was held in Kansas, 1910, and the National Horseshoe Pitchers Association was created four years later. A scoring system is used to determine the winner after each player pitches horseshoes at a stake. The game can be played for fun at home by using shop bought plastic horseshoes and stake.
Source: Author Plodd 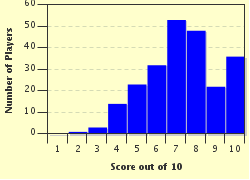