Let Me Be Your Salad Dressing! Quiz

Inspired by a challenge from Kyleisalive. Each of these contenders wants to be your salad dressing (or dressing ingredient).

Quiz Answer Key and Fun Facts
1. Me first! Me first! I'm a delicious combination of mayonnaise, sour cream, chopped herbs and the ever-popular anchovy. I was created at San Francisco's Palace Hotel and named after a hit play of the time (1923). Who am I?

It might sound a little heavy for modern tastes, but the fresh herbs give Green Goddess dressing a real punch. A version using a vinaigrette base thickened up with tahini sauce is a delicious alternative. The "Green Goddess" was also a nickname for a model of fire engine used by the British Armed Forces.
2. Did somebody say "anchovies?" Anchovies are what gives me my special flavor, sometimes in the form of Worcestershire sauce--along with the raw egg that was part of my original recipe. I'm usually drizzled over Romaine lettuce and sprinkled with croutons.

No lunch spot's menu would be complete without a Caesar salad. This popular concoction has been claimed as the brainchild of many chefs, though most historians believe that Italian-Mexican restaurateur Caesar Cardini created the salad in 1924, when a holiday rush at his Tijuana restaurant used up most of his standby salad supplies.

He threw together what he had left, and voila--culinary history.
3. Ugh! Who wants fish in their salad? I'm a much better choice for a clean, tart flavor. The ingredient that gives me my characteristic color and taste has been produced in Modena, Italy for at least a thousand years. Look for "Tradizionale" on the bottle to make sure you're getting the real thing.

Modena and Reggio Emilia are the only two places in the world where balsamic vinegar labeled "Aceto Balsamico Tradizionale" can be legally produced. Its complex flavor is the result of reducing grape juice to a thick syrup, then aging it for a minimum of 12 years. If a bottle is labeled "Balsamic Vinegar of Modena," then it's nothing more than cheap wine vinegar mixed with caramel and artificial coloring.
4. That sounds a bit rich for my blood! I'm an all-American choice for salads and veggie dipping, though most people would be hard pressed to name my real ingredients. To make me at home, try whisking together buttermilk and mayonnaise, then stirring in lemon juice, salt and pepper, and a sprinkling of minced fresh parsley and chives.

The top-selling salad dressing in the U.S., ranch dressing was invented by the owners of Hidden Valley Ranch (yes! they were real people!) in the 1950s. The formula was bought by Clorox in 1972, those convenient little packets of powdered seasoning were developed, and dressing history was made.
5. All-American? How about a dressing with a foreign accent? I'm more of an ingredient than a full-fledged dressing, true... but who can resist a creamy paste of crushed sesame seeds? Whisk me with some lemon juice to dress a green salad, or mix me with date syrup to make a popular Middle Eastern dessert.

Tahini, or sesame paste, is a versatile and expensive ingredient that makes an appearance in the cuisine of countries from Morocco to Japan. It's used in such dishes as hummus, where it's blended with cooked chickpeas and garlic, and halva, a sweet and crumbly confection enjoyed throughout the eastern Mediterranean and Balkan regions.
6. Sesame paste sound a little bland? Spice up your salad with me instead! I'm made of a mixture of mayonnaise, chili sauce, green onion and minced chili peppers, and I'm especially popular tossed with shrimp, crab or other seafood.

The Louis salad is another culinary invention claimed by many chefs. It was most likely developed in coastal Washington State or in San Francisco, and it was first served with Dungeness crab. These days, you're more likely to see Shrimp Louis than Crab Louis on your restaurant menu. Either way, it's said that when Enrico Caruso sang in Seattle in 1904, he kept ordering Louis salads until there was none left in the restaurant kitchen.
7. With all these fancy dressings hanging around, I get no respect. I'm a salad dressing, too. See? It says so right on my label. Who are you calling a low-rent mayonnaise? I'll have you know I co-starred in Lady Gaga's "Telephone" video, right next to my old friend Wonder Bread.

Miracle Whip was introduced during the Great Depression, in an attempt to make "fresh foods such as fruit, vegetables and salads better tasting, more appealing and less expensive to Depression-weary consumers," according to an archivist at Kraft Foods. It's both sweeter and tangier than traditional mayonnaise.
8. Speaking of mayonnaise--if you've got some on hand, stir in some ketchup and you've got my basic formula right there. Many people think I got my name from the small specks of chopped pickle often whisked into me, but I am actually named for the New York fishing resort where I was developed. Or maybe by the Chicago chef who also claimed to have invented me. Either way, I'm smeared on every hamburger produced by In-N-Out Burger (though they just call me "spread").

When you're as popular as Thousand Island dressing, it seems everyone wants to claim you as their own. No one knows for sure where this recipe originated, though it's now a staple ingredient at many fast-food joints. It's perhaps best known in its mustard-enhanced form as the "secret sauce" slathered on every Big Mac.
9. Enough with these all-American creations! If you're making a salad with Japanese flair, try me instead. I'm based on a simple vinaigrette, but I'm usually flavored with ingredients such as umeboshi (pickled plum), wasabi or grated ginger. My standard ingredients include rice vinegar, vegetable oil and plenty of soy sauce.

Wafu means, literally, "Japanese salad dressing." This basic template lends itself to all kinds of sweet and savory variations. A salad might be sprinkled with gomashio--a mixture of toasted black sesame seeds and coarse salt--but it probably wouldn't include katsuobushi--flakes of dried, fermented tuna that may be added to sushi or used to make soup stock.
10. You've met the other pretenders--now meet the real contender. If you want the flavor of your salad ingredients to shine through, choose me. My ratio of 3 parts smooth, fruity olive oil to 1 part tart vinegar is a true formula for success. Once you've got that down, the type of vinegar - try champagne, sherry or rice - and other ingredients, maybe Dijon mustard or minced shallots, are up to you.

Many other types of dressing - "Italian" and "French" among them - are really just variations on the vinaigrette formula. Making your own vinaigrette takes less than a minute (maybe two minutes if you chop your own shallots) and guarantees the best, freshest-tasting salad dressing around. With the necessary ingredients so inexpensive and widely available, there's really no reason to settle for bottled imitations packed with sweeteners and chemicals. Let it be your salad dressing tonight!
Source: Author Quizissippi 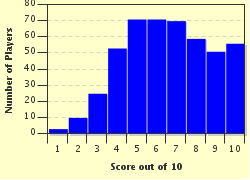 All of these quizzes have the word ?salad? in the title.


Other Destinations
Explore Other Quizzes by Quizissippi