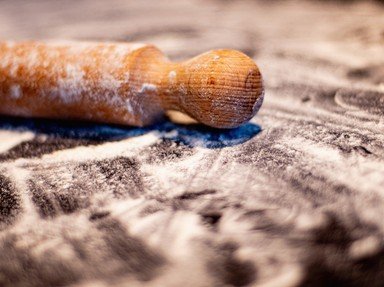 You Bake My Day Trivia Quiz

Veronica enters a local baking contest, outdoing herself with each dish. Disclaimer: this quiz may make you hungry.

Quiz Answer Key and Fun Facts
1. For her first baking entry Veronica will try to wow the judges with something refreshing, delicious and pretty. She bakes some moist and crumbly biscuit, then tops it with whipped cream and a dash of vanilla. Which sugar-soaked fruit with seeds on its outside sweetens this favorite?

Strawberry shortcake is made with sugar, flour, baking soda or powder, salt, butter, cream or milk, and sometimes eggs. Strawberries are sliced, soaked in sugar and poured over the finished cake. A "short" dough is mealy or crumbly, made by cutting in more shortening (for instance butter or lard) until the mix is fine, and thus more tender. Strawberry shortcake was created in Britain, and is a special Christmas treat in Japan. Sadly, there were many shortcakes at the baking contest, so Veronica must enter something else.
2. This time Veronica will display patriotism for the baking contest judges. She mixes up a pie crust, fills it with a popular pome, and designs stars and stripes of dough to crust the top. She bakes it in the oven until it's golden brown. She knows this dessert is a winner, because it's as American as what?

Your pie is good, said the judges, but apples originated centuries ago in China, and China was the leading producer of apples well into the 21st century. Except for crab apples, Europeans and Asians enjoyed apples long before the US ever saw one. But we give you baking contest points because it was the Colonists who first brought apples to the New World, and it was inventive Americans who created the double-crusted American apple pie as we know it today.

This apple pie was a symbol for American Colonists.

It meant joy and family in their new home, freedom to create their own lifestyle, and prosperity in their lands. Apple pie is often served on the US Independence day, July 4th.
3. Veronica recalls a baked good she saw formed into elaborate animal designs, displayed in bakery windows all over Europe. She'll need a solid right jab, and yeast, because what ancient, worldwide and daily food likes to be punched?

The list is as long as the cultures that populate this Earth. Bread can be baked round, stick, braided, knotted, stenciled or swirled, and Veronica can craft it into houses, alligators, rabbits or anything else she thinks the baking contest panel might find impressive. Bakery windows often display a gorgeous collection of elaborately shaped loaves. Make bunnies or turtles of bread, to delight children.
4. Although Veronica could steam, saute, stir-fry or grill nutritious and beautiful vegetables for the baking contest, she's going to bake chickpeas with yogurt, cilantro, and curry. Which culture famously uses curry?

Chickpeas, yogurt, cilantro and most famously curry are standard and delicious East Indian ingredients for cooking and baking. In Western countries "curry" may be used to mean any of the Indian or Asian style dishes of meat and veggies made in spicy sauces, usually served over rice, or it may be used as a verb, as in "curried chicken".

In East India, though, "curry" is a mix of spices they call garam (intense or hot) masala (mixture of spices). Garam masala is mixed and added to dishes for flavor, and varies across regions. Veronica's baked chickpeas were tasty, but her attempt wasn't practiced enough to enter in the baking contest.
5. The baking contest judges will say "Laissez les bons temps rouler" over this special festival cake! After it's baked, Veronica will hide a token coin or a plastic baby inside. What sovereign cake is Veronica going to humbly submit?

Also called Kings' Cake, or three kings cake, the King cake is a Mardi Gras Carnival tradition. The small baby inside represents the Baby Jesus, and the person who finds the baby gets benefits and obligations. The "kings" are the biblical three kings or Magi who visited the Christ Child.

In Spain and many Hispanic communities King cake is eaten on January 6th, the "Day of the Three Wisemen". In France a collectible trinket can be found in the king cakes. Interestingly, the French President may not "draw the kings", or claim the king cake token. Veronica hopes one of the baking contest judges finds her token baby, because whoever finds it is "king for a day" and must throw the next party! Laissez les bons temps rouler! - Let the good times roll.
6. Veronica believes an Italian dish of enticing aroma will get her a baking contest ribbon. She uses long, coiled tubes of pasta. Provide the Italian name for these, which identifies it as corkscrew, and hollow.

Fusilli (foo-ZEE-lee) bucati is corkscrew pasta, comes in many colors and flavors, holds sauces well, and tastes great with tomatoes, red peppers and seafood. Fusilli may be solid or hollow. Linguine is flattened spaghetti meaning "little tongues". Spaghetti translates to "little strings", and pici is a very thick and hand rolled pasta. Pasta dishes are much loved, easy to make and look beautiful, too. But because they are easy, the baking contest judges expect something more.
7. Undaunted in her pursuit of the baking contest win, Veronica will present an organic and nutritious baked dish. She orders this main dish wild from Alaska, because which running and colorful fish offers beauty, taste and healthy omega-3 fatty acids?

Wild salmon is rich in the beneficial fatty acid omega-3, protein and amino acids. Salmon is thought to reduce inflammation, and is also a low-risk fish for mercury and contamination with pesticides, if Veronica buys wild-caught salmon out of plentiful runs, like those in Alaska.

Healthy salmon is loaded with vitamin B12, vitamin D, selenium, vitamin B3 and many other nutrients. Veronica can choose from honey, ginger, mustard, oranges and many other tasty foods and spices, to make an outstanding baked salmon.
8. The baking competition is so stiff, Veronica will go with something unique. She'll enter a baked butternut squash from the Native American tradition, using a mud and straw adobe outdoor oven. An oven like this is often called by which Spanish name?

A "brick" or adobe oven is also called a horno, the Spanish word for a baking room or oven. The horno is an outdoor, beehive shaped oven made of mud and straw. It has been used by Mexican and Native American peoples for eons. The adobe holds heat, cooks foods slowly, and uses no gas or electricity. Cornbreads, oven breads, stews and vegetables come out with a golden crust and a delicious, smokey flavor. To bake a dish with Native American flavor at home, try squash stuffed with apples and sausages, or wild rice. Kugel is a baked casserole traditionally made in Israel. Obeun is the Korean word for oven.
9. The baking contest demands even more inventive entries, so Veronica is going to knock their socks off with the seemingly impossible. She'll put cold ice cream into a hot oven! What is this incredible dish called?

Baked Alaska was created in New York city in 1867, to commemorate the US purchase of Alaska. It's a simple ice-cream cake, but when covered in meringue, it goes into a hot oven for a couple of minutes, the meringue browns, and the ice cream stays cold. Pulling cold ice cream out of a scorching oven is a feat to astonish and delight guests, kids and hopefully, baking contest judges.
10. How about sweet and simple to win a baking contest? Veronica makes the dough for a favorite standby cookie, but in a new style created by Dominique Ansel. The judges will be able to eat AND drink it. What yummy dessert will Veronica enter, that might be heard around the world?

She'll press the dough tightly into small aluminum shot cups, leaving the middle open. She'll mix in a bit more magic, and in just 20 minutes she can pour cold milk into shotglass-shaped cookies, and drink up, taking a nip off the cookie cup! Scrumptious! This is definitely a baking contest winner. (The hint was "The shot heard round the world").
Source: Author Godwit 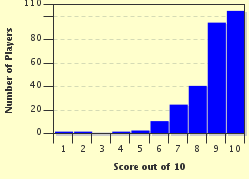 Related Quizzes
This quiz is part of series Quick Mix List to Claim: