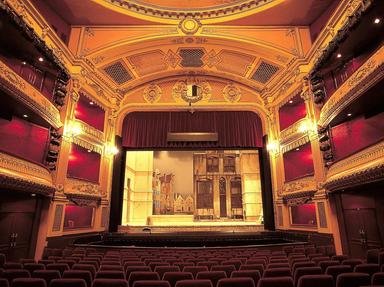 The performing arts covers many categories of theatrical skills. See how many of these facts you know. Have fun!

Quiz Answer Key and Fun Facts
1. The skill of acrobatics has been entertaining audiences for centuries. In the art of which ancient culture have acrobats been portrayed performing their skills on the back of bulls?

The Minoan civilisation was at its height during the Bronze Age of mankind. It rose on the island of Crete and covered a time period from the 27th until the 15th century BCE. Part of Minoan religious culture centred around bulls and the art of bull leaping, and much of this ancient civilisation's surviving artwork depicts both male and female highly trained acrobats, many of whom were priests or priestesses, partaking in this unusual practice. Acrobatics evolved from that time over the centuries to become an entertainment spectacle with a focus on entertainment and theatrical enjoyment rather than any religious purpose.
2. Buskers were referred to by this term from approximately 1860 in European countries. Up until this time however, by which term were these street performers usually known?

Busking is the art of performing in open areas in public places, sometimes excruciatingly so, and often times without any rehearsal at all. A good busker, however, devotes as much time to learning and perfecting his or her art as any performer in controlled environments such as theatres or circus rings.

Other names by which buskers were known, and sometimes still are, include street performers, street musicians, troubadours and minstrels. The last two terms however refer more to a distant past, and are associated more with eras such as the Middle Ages in European history.
3. Dancing is another of the performance arts, whose beginnings are impossible to date with any degree of accuracy. Of the following choices, what was one of the purposes of early dance?

The art of dance is so old that a form of it has even been depicted on ancient artifacts such as engraved stone tools - and on the walls of caves. Perhaps they weren't dancing at all, who knows, but it is commonly believed that this is what the images depict. Today there are many forms of dance, both professional and highly trained, or make it up as you go along dancers who often appear in talent shows. Dancing styles, too, include a vast array of styles and methods, and range from the top of the cultural performances such as ballet, to street performers seemingly determined to put their back out of joint forever, with hundreds of other dance styles in between the two.

This performance art has almost as many purposes as styles. These include religious, entertainment, cultural, personal satisfaction, professional, healing, to portray cultural beliefs and long ago myths - and very many more.
4. Juggling has been around for several thousand years. During the decline of the Roman empire, however, this art was banned. Why was this?

The skill of juggling has been found depicted on various pieces of pottery and walls of tombs going right back to 2700 BC. In the early part of the Roman Empire it was still a popular means of entertainment, but when that empire began to decline, jugglers, known as gleemen then, were also a casualty.

They were accused of being immoral and practising witchcraft. It would be several hundred years before they re-emerged as a form of public entertainment, and for some time after that, jugglers were mainly associated with circus acts. By 1947 an International Jugglers Association had been formed, and, by the year 2000, an annual World Juggling Day was being celebrated right around the globe.
5. Magic is another of those performing arts that has fascinated people for several thousand years. What is another name for a magician?

The word "magic" dates right back to early Greek and Persian days, where it was often associated with the power that priests were believed to possess. For a long period in history, this skill became associated with the darker arts and was often used to frighten and control uneducated people.

It was also associated with witchcraft in this regard. The practice of modern magic as a means of entertainment and enjoyment began with one Jean Robert-Houdin (1805-1871) when that clockmaker by trade opened a theatre in Paris in the 1840s.

There he displayed various magical tricks by means of hidden mechanisms. Since that time, the performing art of magic has never looked back.
6. Opera is a performance skill described as art, architecture, music, theatre, text and materials are all combined to produce a story for an audience. In which country did opera, as we know it today, first begin?

The word "opera" is an Italian word itself. It translates as "work" - and work it is. It takes years and years for a singer to be trained and considered skilled enough to perform the great works of opera on stage. Though "Euridice" by Peri, dating back to 1600, is the oldest surviving operatic score known, it is not the first opera ever written.

The first opera still to be performed regularly, even well into the 21st century, is "L'Orfeo" by Monteverdi. That was written in 1607. Every time I see it written or mentioned, I have a yen for Oreo biscuits.
7. Acting, the art of portraying a story by trained thespians to an audience, dates back to which era in history?

The first individual actor whose name became well known among audiences of the time was one Thespis of Icaria. It is from his name that the word thespian derives. Prior to that gentleman, acting roles were portrayed by a chorus - groups of people who spoke as one.

The standard for chorus numbers became fifteen for tragedies and twenty-four for comedies. All acting right up to the 20th century was carried out live, in front of, hopefully, appreciative audiences. It required skills such as voice projection (no microphones until electricity came along), clear enunciation, the ability to perhaps overly express various emotions by gesture and facially, so that audiences could see clearly, and excellent body language. With the advent of moving pictures and film, where acting is performed in front of a camera, rather than a living audience, far more subtlety of acting skill is required, along with a lessening of the dramatic gesture and facial expression.

There is even today a vast difference in the skills required for acting in front of a camera and acting live on stage in front of an audience.
8. Is it true that the writer himself was once responsible for all aspects of any stage production of his works?

Today there are stage managers, directors, producers, wardrobe designers, scenery designers, lighting specialists, sound technicians and any number of other skilled professionals to all combine under the leadership of the director to get a show or a movie on the road. Once, however, this was the sole responsibility of the poor old writer himself.

Not only did he have to write the work, but he had to organise every other aspect of the production before it was ready to be performed in front of a live audience.
9. In the art of live performances, what was a stock character?


Answer: A character portraying a typical emotion or stereotype

Way back in the early days of Greek drama, stock characters were identified by an audience by the masks they wore to portray specific emotions of stereotypes. Some of these included the boastful impostor, the clown, the villain, the hero and so on. These stock characters also often wore clothing to indicate their role in any production as well. Those portraying servants wore short sleeved tunics, for example, those portraying farmers or shepherds always carried a crook, and kings always held a sceptre.

These identifying character marks evolved over time to become part of the dialogue itself instead, along with the acting skills necessary to bring them to life.
10. Which country gave birth to the art of ballet?

Ballet rose to become one of the performing arts in the royal courts of Italy during the Renaissance period. The early steps of the dance were simply derivations of the polite court dances of the time, and costumes were nothing like we see on stage today during a traditional ballet performance. Women in particular were hampered by the fact that they had to wear formal gowns that reached right down to their dainty ankles.

It would have been difficult to achieve a high graceful leap in one such. Early ballet was also linked by a narrative which provided the missing parts of the action - and each new act was delivered along with a different course on the menu.

This led to many early ballet performances stretching over many hours for the weary dancers. Over time, of course, ballet has emerged as more professional, less elaborate, shorter, and minus the accompanying menu, and become the displays of delicate grace, strength and beauty we see on our stages today.
Source: Author Creedy 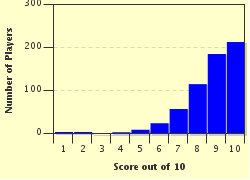 Related Quizzes
This quiz is part of series Amazing Race 2 - The Rockettes: