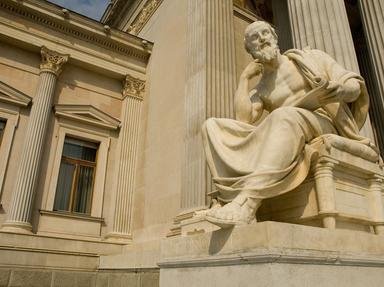 Can You Spot the Fallacy? Trivia Quiz

A quiz about logical fallacies of reasoning that people use in arguments.

Quiz Answer Key and Fun Facts
1. Anthony and Marie have a heated argument. During their fight, Anthony tells Marie that he hates her and wished that she would get hit by a bus. Later that evening, Anthony receives a call from a friend who tells him that Marie is in the hospital because she was struck by a bus. Anthony immediately blames himself and reasons that if he hadn't made that comment during their fight, Marie would not have been hit. What logical fallacy has Anthony committed?

Post hoc ergo propter hoc is Latin for, "After this, therefore because of this." This fallacy assumes that just because one event occurred before another, that the first caused the second. In Anthony's case, he assumes that because Marie was hit by a bus after he told her he wished she would be, that caused her accident.
2. Louise is running for class president. In her campaign speech she says, "My opponent does not deserve to win. She is a smoker and she cheated on her boyfriend last year." What fallacy has Louise committed?

Ad hominem means "To the man" in Latin. People who use this fallacy attack a person directly rather than actually refuting the person's arguments. Louise's opponent's infidelity and smoking habit have no bearing on her ability to be class president.
3. Consider the following conversation: Bill: I think capital punishment is wrong. Adam: No it isn't. If it was wrong, it wouldn't be legal. Of which fallacy is this an example?

Begging the question, a type of circular reasoning, is a common fallacy. In this fallacy, the proposition itself assumes that the conclusion is true. Adam has just talked himself in a circle.
4. Sarah wakes up one morning to find that she has just slept through her anatomy test. She emails her teacher and asks if she can make up the test. Sarah states that she deserves to take it at a later time because she didn't sleep well because her boyfriend just broke up with her, her dog is sick and she stained her favorite dress. What fallacy is this?

Special pleading is the fallacy in which a person asks for special treatment based on what he or she thinks are special circumstances. Sarah assumes that her case warrants a postponement of her test, but there may be no real justification for special treatment. The teacher needs to decide whether this is in fact special pleading, or a situation involving special circumstances.
5. Ricky is watching television when he sees a commercial for foot cream. The commercial announcer says, "This is the best foot cream on the market because no other foot cream makers have been able to prove otherwise!" What fallacy has the announcer committed?

Appeal to ignorance assumes that a conclusion is true simply because it cannot be disproved. Though there may be no research to show that there are better foot creams, it by no means proves that that particular brand is any good.
6. Maria has been working at her current job for more than 30 years at the same wage. She desperately wants a raise so she approaches her boss to ask for one. She says, "You are one of the kindest people I know. You are smart and good-looking and I really love your shoes." What type of fallacy is this?

This is an emotional appeal known as appeal to flattery. Maria is merely kissing up to her boss, rather than explaining the reasons why she deserves a raise.
7. Jeff's mom is concerned when she finds out that he skipped class one day. She tells him that she is concerned that since he skipped one class, he will start skipping more frequently. Then he will drop out altogether, never graduate or get into college, and end up unemployed and living at home for the rest of his life. What type of fallacy has Jeff's mom committed?

Slippery slope assumes that one minor event is going to lead to another event and then another, which will eventually lead to some sort of catastrophe. People who use this fallacy are generally imagining the worst case scenario, even though that scenario will not necessarily happen.
8. Consider the following exchange: Debbie: I think capital punishment is a necessary component of our justice system and should remain legal. Dylan: So you are saying that murder should be legal and it is okay for us to go around killing people just because we think they deserve it? That isn't right. Of what fallacy is Dylan guilty?

Straw man is a fallacy whereby a person builds up an exaggerated "straw man" version of the original argument and then attacks that version. Dylan has an easier time arguing against the idea that Debbie endorses murder than he would attacking her original argument.
9. Dana is trying to raise money for her university's library. In her address to the board of trustees, she says, "We must raise tuition to cover the cost of new books. Otherwise the library will be forced to close." Of what fallacy is this an example?

The either-or fallacy, also known as the false dilemma, forces people to choose between two alternatives when there may be other options available. Clearly there are more ways for a university to earn money than by raising tuition, but Dana wants a tuition increase, so she makes it sound like that is the only option.
10. Jeff is preparing to create a commercial for a new energy drink. He visits a local high school and surveys students in an English class about their beverage preferences. The majority of the class says they prefer grape flavored drinks, so Jeff tells his superiors that grape is the flavor favored most by high school students. What error in reasoning has Jeff made?

A hasty generalization is when someone assumes that is what is true for a few people is true for all people. Just because one class likes grape drinks, it does not mean that all high school students will.
Source: Author flamingo6684 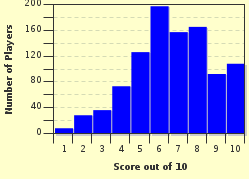 
Other Destinations
Explore Other Quizzes by flamingo6684