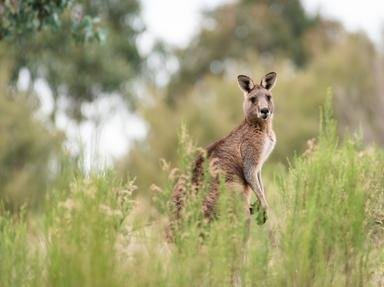 Australian colloquialisms are renowned for their colourful turn of a phrase and clever wordplay. Hopefully, you'll find this small sample amusing and informative. (Aussie is pronounced 'Ozzie'. See the end comments for further explanation of my title)

Quiz Answer Key and Fun Facts
1. When an Aussie has had a satisfying meal where they have over indulged (perhaps from a well stocked table, such as at Christmas), what would he informally reply when the host asks if he would like more to eat? "No thanks, I'm..."


Answer: as full as a goog

Another phrase that's becoming popular in the same circumstances is "as full as a doctor's wallet". Goog (sounds like 'good') is Aussie slang for egg. On its own it is rarely used these days except in this expression or in baby talk where an egg might be referred to as a googy egg. The word is thought to be derived from the northern English slang word 'goggle' meaning egg. The simile is also used to describe a person that is drunk.

However, I do like the sound of my alliterative creation "fuller than a fat fox". I think I'll try and introduce it!
2. You overhear an Aussie say to his friend, "You're having a lend of me, mate". What is his mate trying to do?


Answer: take advantage of their gullibility

The phrase has a somewhat similar meaning to the American expression "take the mickey out of someone". If someone were to tell you that the Eiffel Tower is in Sydney, you could reply "You're having a lend of me". It's normally used when a person has a bit of fun at someone else's expense, e.g. "He's having a lend of you, mate". I'm unable to find the origins of this expression but the phrase is still commonly heard today.
3. An Aussie's friend asks "How're you goin'?". She replies "I'm flat out like a lizard drinking". Whatever does she mean?


Answer: She is extremely busy

This analogy is an extended form of the term 'flat out' which means 'as fast as possible', as in "She was driving/running/working flat out". The phrase can be used in any suitable context, but is usually heard as a response to a query.

There are several, conflicting references to the origin of this phrase. One suggests it describes the flat-on-the-ground appearance of a lizard as it drinks, whereas another purports that lizards drink quickly to avoid becoming a meal (because watering holes are often in the open). It could just as plausibly have been the result of some quirky Aussie's sense of contradictory humour because a drinking lizard does not appear to be doing much at all.
4. A 'galah' is an Australian cockatoo. It is also an Aussie slang term. What are you doing when an Aussie asks you to "Stop acting like a galah"?

The pink and grey galah is popular as a caged bird partly because of its playful antics. The bird often appears to be acting like a clown or playing the fool for its audience. An Aussie might affectionately call you a galah instead of an idiot.
5. To what does the Aussie term 'hard Yakka' refer?

Yakka is an Australian indigenous word, from the Jagera language, for work. It was adopted as a brand name for work clothing that became renowned for its durability. An advertising slogan for Yakka clothing is "Nothing's Tougher!". A television ad showed people doing sweaty, tough tasks while the accompanying jingle just repeated the phrase "hard yakka" sung in a grunting manner. Yakka clothing became a must-have for the Aussie blue-collar worker, and the term has become synonymous with demanding, laborious tasks.
6. An Australian invites you to a function and asks you to to 'bring a plate'. What is expected of you?

It's not as common nowadays as it used to be, but not unheard of, for everyone to be asked to bring a plate of food to a (generally informal) gathering where the food is placed on a table as part of a buffet style meal. The type of food is normally left to the guest's discretion and financial means.

The food doesn't necessarily have to be on a plate but it is expected to be presented in a manner ready for eating (i.e. cooked) together with the utensils required for serving (carving knives, serving spoons, etc.).

A modern variation of this is a 'BYO' party or a 'BYO' restaurant where you're expected to 'Bring Your Own' alcoholic drinks.
7. A visibly drunken Aussie says he's had a 'Technicolour yawn'. What does he mean?


Answer: He has vomited

This is not an expression that would normally be used in polite circles but, then again, vomiting is not a subject that's often discussed. It is, however, the sort of comment a drunken 'yobbo' (uncouth person) might be expected to make.
8. What does that Aussie mean when she asks you not to 'spit the dummy'?


Answer: Don't get angry - calm down

A dummy is a British, hence Australian, term for a baby's pacifier. Just as a baby drops the dummy from their mouth when they're about to start wailing, a person who has shown an extreme burst of anger is said to have spat the dummy. To put it in context, "The boss is gonna spit the dummy when he finds you haven't finished that task" or "When Raelene heard what Charlene had to say, she spat the dummy and then she stalked off with Kayleen". Now I think of it, stalking off in a huff without saying a word is another way of spitting the dummy.
9. How might an Australian respond if you were to ask him "How are you"?


Answer: Any one of these

Aussies have many ways to describe their state of health. Mallee country is semi-arid, therefore grazing animals must be strong to survive. To be 'as fit as a mallee bull' means you're feeling strong and healthy.

We're particularly colourful when describing illness. To be crook is to feel unwell. 'Crook as a dog' means one is feeling extremely sick, don't ask me why. I've never seen a kangaroo with consumption (neither, I imagine, has anyone else) but it is a lovely alliterative phrase that is not very widely used these days.
10. How would an Aussie colloquially describe either someone who is angry, or someone who's crazy and has 'a few kangaroos loose in the top paddock'? He/she is _________.


Answer: as mad as a cut snake

The simile is based on the frantic movements of snakes when they're held on the ground by the head (as is done in preparation for cutting it off). Mad in this context can mean either crazy or angry. E.g. "That man over there with the tea cosy on his head is as mad as a cut snake" or "When the boss saw what had happened, she got as mad as a cut snake". I've heard, and used, the expression in both of these contexts.
11. You're watching a Test cricket match at the W.A.C.A (pronounced 'whacker') and hear a heated conversation in which one bloke says to another "You've got tickets on yourself, mate". What on earth did this Aussie mean?


Answer: The person is conceited and has a high opinion of themselves

The origins of this expression are uncertain. The most likely origin seems to have gambling connections in that the person has such a high opinion of themselves they would purchase betting tickets backing themself to win. Another possibility is they have placed a high priced ticket on themself as in a high value item in a store.

It could be said that I have tickets on myself for thinking I could write the definitive Aussie slang quiz!
12. How would someone who is without any money, or 'short of a quid', be described in Aussie slang?


Answer: He hasn't got a brass razoo

Razoo is pronounced rah-zoo emphasising both syllables. The Oxford English Dictionary definition of razoo, "a non-existent coin of trivial value", is based on this saying. The beginnings of this phrase are credited to that famous author Origins Unknown. The saying is believed to have been coined (pun intended) by ANZAC soldiers during World War 1.

A 'quid' is Pommie/Aussie slang for one pound (currency).
13. What did that Aussie bloke mean when he said "England (or India or Pakistan or South Africa etc.) didn't come within 'cooee' of Australia in that cricket match"?


Answer: The other team never came close to winning the game

Cooee is an archaic call that people in the 'bush' (countryside) would make to identify their position to others. It's akin to those Western films where a cowboy fires his gun into the air so others can locate him. To not come within cooee is to be so far away as to not be heard.

The call is never used these days but the expression is still around to indicate that someone is or was a long way from achieving their goal. E.g. "She never came within cooee of graduating from university."
14. What slang phrase might an Aussie say to someone they hold in high esteem?

The compliment is high praise indeed and is generally used when a person has done an exceptional, praiseworthy act. With the exception of the fruit bat thingy (which I made up), the other phrases might possibly also be used but they don't carry anywhere near as much weight.

The phrase's origins almost certainly have something to do with the practice of donating blood; though how it came into existence remains a mystery.
15. Where, in Australia, is Woop Woop?


Answer: Somewhere in the middle of nowhere

Woop Woop (woop pronounced as in 'wookie' or 'book') is a fictional town that is used to describe anywhere far away from civilisation. Aussies go there, are there, come from there or have been there. E.g. "I've just been to Woop Woop." or "She's out Woop Woop somewhere." or "He's just got a job in Woop Woop." Dictionary.com gives its origin as "mimicking placenames of Aboriginal origin", like Wagga Wagga or Gingin.

Other, less common slang expressions used in the same circumstances are 'out back of beyond', 'beyond the black stump' or (infrequently these days) 'back o' Bourke'.
Source: Author odo5435 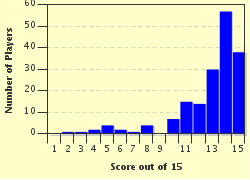 
Other Destinations
Explore Other Quizzes by odo5435