This Sums It Up - Math Puns Trivia Quiz

See if you can differentiate between the right and wrong answers to these somewhat cringeworthy math puns. I've also tried to integrate some more punny stuff in the interesting information.

Quiz Answer Key and Fun Facts
1. It was a very sad day for the mathematician. I asked him what was wrong. He pointed to a dead bird in a cage and said what?

I asked the mathematician what killed the bird. He said, "Polynomial."
2. I had just left the house to go for a walk when it started raining. Rather than get completely drenched, I decided to cancel my walk and do what?

I've thought to myself many times about group theory. I wondered why Newton hadn't discovered it. I realised he wasn't Abel.

(By the way, an Abelian group is one which displays commutativity.)
4. I saw a kettle suspended above a fire boiling some water. What might it have been described as?

My mother made cookies in the shape of plus signs, and asked if I wanted some, but I declined - there were too many additives.
5. So two straight lines are having a chat. One says to the other, "Hey, that 30° angle over there looks quite nice." The other replies, "Yeah, she's..." what?

I like angles...to a degree.
6. A good mathematician friend of mine (I have a lot of them, by the way) retired the other week, to a nice house out in the country. I went and visited him, and saw a sign out the front displaying the name of the house. What was it?

He was also planning a trip to a little cabin that his family owned. It started me thinking - if you were to integrate 1/cabin, you'd get log cabin. But that of course is not the full answer. You need to add the arbitrary constant, making it log cabin + c. And what is a log cabin + c? A houseboat.
7. It was a hot day, so I drove down to the beach. There was a sunburned man there. What would that make him?

The man said he was a lumberjack. I asked if he was a good musician. He said no and asked why. I said that lumberjacks make good musicians because of their natural logarithms.
8. A friend's daughter brought home a plant that she had been growing during math classes. It looked fine, but then she took it out of the pot, and the bottom part of it was quite strange. What made the plant odd?

e^x wanted to be friends with the others at school more than anything, but it just wouldn't work. He tried again and again to integrate himself, but it made no difference.
10. I was asked if I thought Newton could transform into an umbrella. I replied with what? 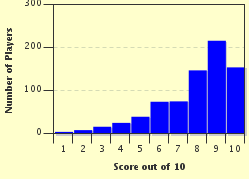 Related Quizzes
1. Aspects of Humor: What's So Funny? Average
2. Pick-a-Pun: The Musicals! Easier
3. What the Spell Check Mist: Typo Transfusion Easier
4. A Lovely Punny Day For a Family Quiz Very Easy
5. The Art Of Punning Easier
6. Let's Get Down To Bismuth - Elementary Puns Easier
7. I Always Wanted To... Very Easy
8. A Man Walks Into A Bar... Easier
9. One Way or an Udder - Farmyard Puns Very Easy
10. By Order of the Pun-Master General Easier
11. Pussy Puns Average
12. A Punny Quiz Easier

Go to Language Use Quizzes