Onomatopoeia? Oxymoron? Anagram? Do you know these terms? If you don't, try this quiz and find out what they mean. If you do know them, well, you might find this quiz easy. Have fun!

Quiz Answer Key and Fun Facts
1. Round the rugged rock the ragged rascal ran. This is an example of:

2. A synonym is a word that means the same as another word. Which of these words is NOT a synonym for huge?

Mundane means ordinary
3. An anagram is a word, or words, made up from another word or words. Which of these is NOT an anagram of 'plate'?

An anagram is a word that is made up of the same letters as as another word. For example, rate is an anagram of tear; drop is an anagram of prod. Therefore aelpt is a scramble of plate, not an anagram, as there is no such word as aelpt.
4. Which of these words is a homophone of 'meat'?

A homophone is a word that sounds the same as another but has different spelling. Seat and beet rhyme with meat. Mate is an anagram of meat.
5. Which word is an antonym of reckless?

Antonym means a word with an opposite meaning. Headstrong and rash are synonyms of reckless.
6. Which of these words is NOT a palindrome?

A palindrome is a word that reads the same when reversed. This is true of level, noon and rotor, but not of never.
7. A homonym is a word that is spelt the same way as another, but has a different meaning, e.g. pool. What one word can mean fast and also a group of ships?

8. Onomatopoeia means a word that sounds like its meaning. e.g. crack, buzz. What is the onomatopoeic word that describes the noise a snake makes?

9. There is no special term that I know of for a word that makes another word when spelt backwards. How about just reversal? What animal's name can be reversed to make a word meaning to run smoothly?

An oxymoron is a phrase in which contradictory words are combined. Such as deafening silence and beautiful prison.
Source: Author minch 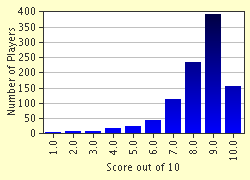 Related Quizzes
1. What Did They Really Mean? Very Easy
2. How to be Sarcastic Average
3. Unusual Collective Nouns Very Easy
4. A Poem and a Prayer Very Easy
5. All Generalizations Are Wrong Average
6. How to NOT use bad words! Average
7. A Pair of Didymous Average
8. Malapropisms - The Pineapple of Word Quizzes Very Easy
9. The Impossible Quiz Tough
10. A Thoroughly Ridiculous Quiz Average
11. Euphemisms: Can You Recognize Them? Easier
12. Identify These Figures of Speech Average


Other Destinations
Explore Other Quizzes by minch