What Did They Really Mean? Trivia Quiz

The word "malapropism" comes from Mrs Malaprop, a character created by the playwright Richard Sheridan. She often used fancy words that were just plain wrong. I'll give you some famous malapropisms and you guess the correct term.

Quiz Answer Key and Fun Facts
1. "He is the very pineapple of politeness!" Which is the correct term?

This is an example of the original Mrs. Malaprop in the play "The Rivals" by Richard Sheridan.
2. Wes Westrum said about a close baseball game: "Well, that was a cliff-dweller." Which word should he have used?

The former Giants manager also said of baseball: "It's like church: many attend, but few understand."
3. "This is unparalysed in the state's history." What is the correct word?

Gib Lewis, Texas Speaker of the House, is also credited with asking a group of handicapped people in wheelchairs: "And now, will y'all stand and be recognized?"
4. "Listen to the blabbing brook." What word should Norm Crosby have used?

Norm Crosby is known as "The King of Malaprop". He always speaks from his diagram and drinks decapitated coffee.
5. Mike Smith, baseball pitcher, said about his new coat: "It got lots of installation in it." Should he have said "insulation" or "insolation"?

"Insulation" is the correct term. "Insolation" refers to exposure to sun and solar radiation striking the earth's surface.
6. Mike Smith also asked for a salad with "lots of neutrons". What did he really want?

Croutons are fried or roasted bread cubes. Futons are for sleeping, Teutons were an ancient Celtic or Germanic tribe and zileutons are a kind of asthma drug.
7. Who is credited with this famous malapropism? "We cannot let terrorists and rogue nations hold this nation hostile or hold our allies hostile."

"Bushisms" have created lots of material for comedians. "Free societies will be allies against these hateful few who have no conscience, who kill at the whim of a hat" is another famous statement by Dubya.
8. This is an anonymous example of charting in a nursing home: "Mrs. X is exhibiting bazaar behaviour." What kind of behaviour was the nurse trying to describe?

"Bizarre behaviour" is a catch-all term for people acting, well, strange.
9. Let's have a Canadian example. Allan Lamport, former mayor of Toronto, said: "Keep this up and we'll have a vicious triangle." What geometric figure should he have used?

Another acceptable term would be "vicious cycle".
10. And finally, another original malapropism from Mrs. Malaprop: "Sure, if I reprehend any thing in this world it is the use of my oracular tongue, and a nice derangement of epitaphs!" What four terms should she have used? 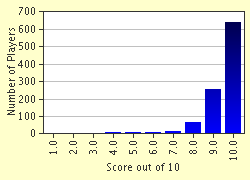 Related Quizzes
1. How to be Sarcastic Average
2. Unusual Collective Nouns Very Easy
3. A Poem and a Prayer Very Easy
4. All Generalizations Are Wrong Average
5. How to NOT use bad words! Average
6. A Pair of Didymous Average
7. Malapropisms - The Pineapple of Word Quizzes Very Easy
8. Words About Words Average
9. The Impossible Quiz Tough
10. A Thoroughly Ridiculous Quiz Average
11. Euphemisms: Can You Recognize Them? Easier
12. Identify These Figures of Speech Average


Other Destinations
Explore Other Quizzes by Catamount