Many authors won't simply come out and say exactly what they mean in their works; they use a variety of techniques and devices to enrich their work and make it more interesting. See if you can identify some of the more common techniques.

Quiz Answer Key and Fun Facts
1. "The sun was like a large ball of butter" is an example of what literary technique?

Similes are a type of metaphorical language which make comparisons between two basically unlike things, normally using the words "like" or "as" to make the comparison. In this example, the sun is being compared to a large ball of butter.
2. "The wall stared at me silently" is an example of what type of literary tool?

A hyperbole is usually an overstatement used to more easily get a point across to someone. In this example, whoever this person is speaking will (almost certainly) not really die if they do not eat a papaya everyday, but they are using hyperbole to get across the point that they love that papaya.
4. "The road was a ribbon of moonlight," is an example of which of these literary techniques?

A metaphor is one of the most general types of literary techniques, branching off into several more specific types. But in its purest form, it is basically a comparison between two unlike things (usually inanimate things-when those come into play, similes and personification are more often used).

In this example, roads and ribbons of moonlights are two quite unlike things, rendering this one a metaphor.
5. "The wise fool is burning my taco" employs what kind of literary device?

An oxymoron combines two completely opposite things into one phrase. In this example, a fool is not very often wise; therefore, it is an oxymoronic expression.
6. Picture this literary scene: the main character hears a scream, and then sees a man running out of the room with a bloody knife. You can often come to the conclusion (most of the time) that he killed whoever just screamed, although it never says outright that "the guy with the knife butchered the screamer." This type of intelligent conclusion drawn by the reader based on clues and observations is called a(n) __________?

Inference is a device used by you, the reader, based on evidence that the author has provided to make an intelligent conclusion about certain events. Most of the time the man with the bloody knife will be the murderer, as demonstrated in the example.
7. This question will use an example from Shakespeare's classic play, "Romeo and Juliet". In the Fifth Act of the play, Romeo arrives at the Capulet family tomb to find his love, Juliet, supposedly dead. However, we in the audience know that Juliet is not really dead, she merely took a potion to make it look like she was dead for her own motives. When the audience of a story knows more than the characters involved, what type of irony is employed?

Dramatic irony is a device used by authors to reveal knowledge to the audience that some characters may be in the dark about. In the above example, Romeo reacts by killing himself since he believes Juliet is dead, although we the audience know that Juliet is not really dead. Thus a certain effect is achieved upon us.
8. If you were bullied by another kid on the playground, and afterwards your friend came over and said "I'll bet you loved that" and you said "Of course", what type of irony were you employing?

Verbal irony is often a spoken form of irony in literature used when a character means the exact opposite of what he is saying. This is often confused with sarcasm; while certain aspects of verbal irony can be sarcastic, sarcasm can often be used to imply something else, instead of just the opposite. Sarcasm is often used more than anything to be mean, as it comes from a Greek word for "to tear flesh".
9. "Flaming ice" is an example of what literary technique?

Once again, "flaming ice" forces together two opposites, therefore it is an oxymoron.
10. "I simultaneously composed and destroyed the opera while writing it" is an example of what kind of literary device?

A paradox is a very confusing, complex, and often difficult to identify literary device. It is usually a statement that contradicts itself, but does seem to hold some truth. It is sometimes known as "the long oxymoron", but paradoxes hold truer to full statements.
11. "Bob is as brave as a lion" is an example of what literary device in action?

Similes again are comparisons between two unlike things using the words "like" or "as". In this case, Bob's bravery is being compared to that of a lion.
12. "My mother always told me never to get close to any danger, as that would be dancing with the devil. Little did I know that in my professional ballroom dancing career, that is exactly what I would do." What literary device is used here through the whole example?

Foreshadowing is a very commonly used device that gives hints about future events in the story before they happen. Foreshadowing can be very clear and specific or very subtle. In this instance, the narrator appears to be giving a hint that perhaps he will dance with the real devil in his ballroom dancing career.
13. In the movie "Casablanca" you expect the loving couple to stay together, but then the girl hops off on a plane! Hey, that's not what I expected! What type of irony is employed in this instance?


Answer: Irony of the Situation

Irony of the situation is a specific type of irony that is used to put an unexpected plot twist. Very often it is used at the end of stories so that the reader will be surprised by the ending.
14. "Up went the bacon strips" is an example of what literary technique? (This technique is used more often in poetry.)

Inversion, also known as an anastrophe, is a type of literary technique that moves word order around so that a greater effect is achieved. In this example, "Up went the bacon strips" has a much better effect than "The bacon strips went up."
15. "A dozen tight fists pounded the criminal's clavicle" uses a unique type of metaphor. Which of these types of metaphor is said type?

None of these answers are correct. The metaphor type mentioned is actually called synecdoche. Synecdoche is a literary device employed where one part represents the whole. In this example, "a dozen tight fists" represents whoever is pounding the criminal's collar bone, presumably the police. Well, that's my quiz. Hopefully now your writing can become stronger and more effective using some of these literary techniques.
Source: Author danceswithcows 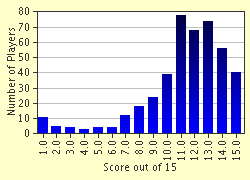 
Other Destinations
Explore Other Quizzes by danceswithcows