So You Know Your Figurative and Poetic Language? Quiz

This quiz is on different types of figurative and poetic language. I will give you a sentence or phrase and you will tell me what device it is using. Test your language knowledge!

Quiz Answer Key and Fun Facts
1. What language device is this? Silly Sally and Sam saw seven slithering snakes sunbathing on the sand in San Francisco.

Alliteration - repetition of the same consonant sound (note: doesn't have to be in the beginning of the word). This example of alliteration is also called sibilance, since the alliterative sound is 's'.

Another example of alliteration: Four furry fish ate french fries on Friday after their coffee break.
2. What figurative language device is this sentence using? I waited in line for a million hours until it was finally my turn.

Hyperbole - an extreme exaggeration (you can't wait for a million hours).
3. What figurative language is this? The tree branches danced at the wind's blow.

Personification - giving human qualities (dancing, for example) to non-human objects (like tree branches).
4. What figurative language device is this sentence using? She was a bird, jumping off the swing, and then sailing through the air until she softly landed on the woodchips below.

Metaphor - comparing two unlike objects without using "like" or "as".

Usually, metaphors compare using the words "is" or "was".
5. What language device is the first word of this sentence using? "Bang!" she yelled after shooting the gun.

Onomatopoeia - words that sound the same as their meanings when said out loud.

Oxymoron - two words that are complete opposites in one phrase; "jumbo" is an adjective describing something that is unusually large, while "shrimp" may describe something that is quite small (as well as being a type of seafood that comes in a range of sizes).
7. The drums were like a thunderstorm. What figurative language is this sentence using?

Simile - comparing two unlike objects using "like" or "as".

note: similes can also compare things using synonyms of "like" or "as"
For example: The cat resembled a statue.
8. An angry lady waved her cane at a maid. Reread this sentence. What poetic device is it using?

Note: not to be confused with alliteration. Alliteration is the repetition of the same sound at the start of the words.

The repetition of consonants in a string of words is called consonance.
9. "Make the bed!" she told her daughter. What language device is "make the bed"?

An idiom is an expression that doesn't mean exactly what it says. When we say "make the bed", we don't mean "build or create the bed", we mean "put the sheets on the bed".
10. What form of language use is this? No pain, no gain.

Cliche - a phrase that has become overly common with a group of people.

More examples: once in a blue moon; every cloud has a silver lining.

Thanks for taking my quiz!
Source: Author kharkiv 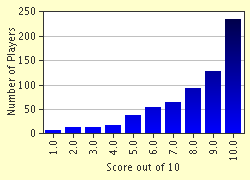 
Other Destinations
Explore Other Quizzes by kharkiv