Though this quiz is, in fact, impossible, it should be easy to get 10 correct, if you figure out the key.

Quiz Answer Key and Fun Facts
1. The "Ashrei" is the recitation from Hebrew literature (Psalm 145) which occurs three times each day in Hebrew worship. What is the first assertion of the "Ashrei"?


Answer: I will extol

Most psalms change voice often. Some verses directly address God, while some speak about God. Psalm 145 begins with no less than six "I" statements in the first third of the psalm - with none to follow in the final 15 verses. The first letter of every verse of Psalm 145 starts with a consecutive letter of the Hebrew alphabet.
2. Not all scholars of poetry appreciate acrostics. Samuel Butler wrote the following: "He uses [acrostics] to lay the outsides of his verses even, like a bricklayer, by a line of rhyme and acrostic, and fill the ____ with rubbish." What word best fits both the quote and the key to the quiz?

Samuel Butler wrote his disdain of this literary convention in "Character of a Small Poet". Butler was best known for the poem "Hudibras", which, like most Restoration works, was critical of the Puritans and won him a pension from Charles II.
3. Which author composed verse about "Annabelle Lee", but evidently reserved his true feelings for: "Elizabeth it is in vain you say, 'Love not' - thou sayest it in so sweet a way: In vain those words from thee or L.E.L. Zantippe's talents had enforced so well: Ah! if that language from thy heart arise, Breath it less gently forth - and veil thine eyes. Endymion, recollect, when Luna tried To cure his love - was cured of all beside - His follie - pride - and passion - for he died."?

Edgar Allan Poe wrote this poem for his cousin Elizabeth Rebecca Herring. The first letter of each line spells out her name. All the other incorrect poets are referenced in the poem, which was never published.
4. In the Anglican Church, the final days of Advent are marked by the chanting of verses which are named for the various names of Christ. What is the name given to these verses?

In order, they are "O Sapientia" (Wisdom); "O Adonai"; "O Radix Jesse" (Root of Jesse); "O Clavis David" (Key of David); "O Oriens" (Sunrise); "O Rex Gentium" (King of the nations); and "O Emmanuel". Acrostically spelling the letters in reverse produces "Ero Cras", Latin for "Tomorrow, I will come" - which summarizes the Advent message.
5. In 1711, Joseph Addison and Richard Steele published a widely read daily in London for the purpose of raising up morality and philosophy - all with a sense of humor. What was the name of his newspaper?

In his journal, Addison objected to popular fads in poetry by opining that he didn't know "whether the inventor of the anagram or the acrostic were the greater blockhead." - "Spectator" #60
6. When the Dutch sweep the skating events in international competition, they stand proudly on the podium to hear "Het Wilhelmus" played - the national anthem of the Netherlands since 1586. What country is mentioned in the anthem's first verse?

The song has 15 stanzas. Here is the first, translated into English: "William of Nassau, scion Of an old Germanic line, I dedicate undying Faith to this land of mine. A prince Of Orange, I am, undaunted ever free, To the king of Spain I've granted A lifelong loyalty." The song is an acrostic of William's name.
7. One of the earliest known acrostics refers to followers of Jesus Christ. In Greek, the letters spell the word for fish. What is the Greek name for the letter "I"?

Pronounced "yota", it is derived from the Phoenician symbol "yodh". Id is Latin for the personal pronoun "I". Ichthys is the Greek word "fish" spelled by the acrostic.
8. Of the three British authors, Currer, Ellis, and Acton Bell, one was - Best Remembered for One Novel That Excelled. What was her real surname?

"Best Remembered for One Novel That Excelled" spells out "Bronte", and describes Emily Bronte, whose sole novel "Wuthering Heights" was first published under her nom de plume "Ellis Bell". The Bronte sisters chose these names to overcome gender bias in British publishing and readership in the 19th century.
9. In 1871, Lewis Carroll wrote a sequel to "Alice's Adventures in Wonderland". What was featured in the title of Carroll's odd sequel?

Carroll wrote "Through the Looking-Glass, and What Alice Found There" which contains, in the last chapter, an acrostic of the real-life Alice's name - Alice Pleasance Liddell. "Jabberwocky" is included in the book, but not in the title. "Hunting of the Snark" is a separate work. "Phantasmagoria" is an alternate title to his work "Rhyme? And Reason?"
10. In 1616, a book was published wherein the initial letter of each chapter spelled out "I Franciscus Godwinus Landavensis Episcopus Hoc Conscripsit". What sovereign state's ruler was the author keen not to offend by publishing his name on the cover?

The book was "Rerum Anglicorum Henrico VIII, Eduardo VI et Maria Regnantibus Annales", by Bishop Francis Goodwin. It was a history of Henry VIII, Edward VI and Queen Mary. Books were commonly written without ascription so as to protect authors from the light headed consequences of offending the crown or other powerful courtiers.

THE KEY: All the questions were about acrostics. The initial letter to each answer spells "Impossible" in acrostic fashion.
Source: Author sidnobls 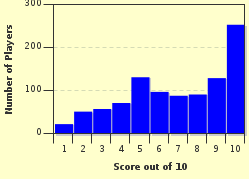 
Other Destinations
Explore Other Quizzes by sidnobls