Test your knowledge of John Steinbeck's 'Grapes of Wrath'.

Quiz Answer Key and Fun Facts
1. Who was the main character of 'Grapes of Wrath'?

Casy felt that he was too sinful to remain a preacher, however he had a strong belief that every man was part of an 'oversoul.'
3. Who was the father of Rose of Sharon's baby?

At a point in the novel, Connie walks off and never returns, leaving Rose of Sharon depressed throughout the rest of the novel.
4. The Joad's home state is....

Tom killed a man in a fight and claimed he would have done it again.
6. Who died on the first night on the road?

7. What family member stayed behind at the river?

8. What family member died while crossing the desert?

Ma Joad got the family through the border by telling the guards that Granma was sick.
9. Who did the police arrest at the Hooverville?

Tom hit a man, but Casy offered to take the blame.
10. Which family member was responsible for the operation of the truck?

11. Ma Joad cooked a soup and was soon surrounded by...

After she served the family, Ma let the children clean out the bowl.
12. At the government camp, Ruthie and Winfield thought they broke the...

The children did not realize that the toilet was supposed to flush.
13. The sheriff tried to destroy the government camp by claiming the residents were...

14. Although the government camp was the nicest place they stayed, the Joads left because...


Answer: they could not find work

15. When Ma went to the company store, what was she was upset over?

Ma stressed the importance of staying together.
17. The men outside of the peach ranch killed....

18. How did the Wilsons help the Joads?

20. Who was the manager of the government camp?

23. After Rose of Sharon's baby dies, which family member is told to bury the baby?

24. In the last chapter of the novel, where does the family take shelter? 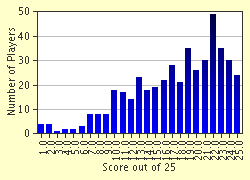 
Other Destinations
Explore Other Quizzes by *kate*