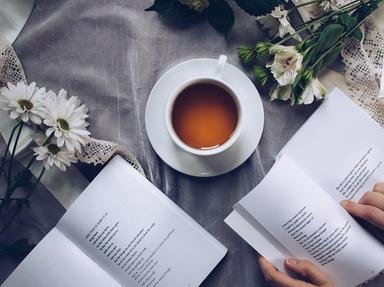 This quiz contains a variety of questions focused on one aspect of poetry: rhyme.

Quiz Answer Key and Fun Facts
1. For which of the following English words is there another English word that is a true rhyme?


Answer: None of these has a true rhyme

There are very few words in the English language that do not have at least one rhyming partner, but here are three of them! The Encyclopedia on www.infoplease.com defines a perfect rhyme (which is another word for true rhyme): "When the vowels in the final accented syllables of the two rhyming words and the consonants (if any) succeeding the vowel have exactly the same sound, it is called perfect rhyme."
2. For which of the following English words is there another English word that is a true rhyme?

"Cryptic" rhymes with "apocalyptic" and "ecliptic," among others.
3. Which of the following pairs of words is an example of a feminine rhyme?

"Ground" and "sown" are only near rhymes. Feminine rhymes are true rhymes that "are not accented on the last syllable or end in a final mute e." (This definition is quoted from the Encyclopedia at www.infoplease.com.) The other two pairs of words are masculine rhymes.
4. Masculine rhyme predominates in the poetry of which of these languages?

The www.infoplease.com Encyclopedia defines masculine rhyme as follows: "When rhymes are of one syllable or end in a consonant with no mute e following, as sad and bad, they are said to be a single or masculine rhyme."
5. Which one of the following poets used a great deal of near rhyme?

Take, for instance, "victory" and "to-day" in her poem "Life": "Not one of all the purple host / Who took the flag to-day / Can tell the definition, / So clear, of victory." Or look at "to" and "owe in this poem: "Is Heaven an exchequer? / They speak of what we owe; / But that negotiation / I 'm not a party to." The other three poets most often use true rhyme.
6. Name a word that rhymes with "charters" and also describes 13th century invaders of Russia. Hint: A character in "The Mystery Of Edwin Drood" by Charles Dickens is referred to as one of these.

Other words that rhyme with "charter" include "starter," "smarter," and "martyr."
7. Which of the following pairs of words is a true rhyme?

All of the others are near rhymes. The words "able" and "table" are a true rhyme of the feminine (also called weak) variety.
8. Here is a brief, original poem I wrote. Fill in the missing word with the only word that rhymes and makes sense in the context of the poem: "Birth does not exist alone; / It dwells with death and loss, / As in the humble manger looms / The shadow of the ______."

Other words that rhyme with loss but that do not make sense in the context of the poem include "toss," "boss," and "moss."
9. Which of the following cultures used rhyme in its poetry?

From about 1300 until the advent of blank verse, rhyme was also the central component of English poetry.
10. Here is a brief, original poem I wrote. Fill in the missing word with the only word that rhymes and makes sense in the context of the poem: "Day drains like a dying ember / On a cold, clouded, damp December. / Silken snow is downward trod / Where men have failed to seek for ________, / And darkened dirt, removed, remains / Upon the snow in silent stains."

Other words that rhyme with "trod" but which do not make sense in the context of this poem include "rod," "shod," and "nod."
11. Complete this famous rhyme by Alexander Pope: "Nay, fly to altars, there they'll talk you dead / For fools rush in where angels fear to ____."

The quote comes from Pope's "Essay on Criticism". This English poet coined many phrases that are now practically proverbs, including the saying "a little learning is a dangerous thing."
12. Which of the following pairs of words is a near rhyme?

The words "sever" and "forever" and the words "moon" and "spoon" are perfect rhymes. The words "apple" and "orange" are not even near rhymes; it's like comparing apples to oranges. The www.infoplease.com Encyclopedia defines near rhyme as follows: "imperfect or approximate rhymes, in which the rhymed vowels and even the consonants might be similar but not identical." Near rhyme, sometimes called slant rhyme, relies on assonance.
13. Fill in the missing rhyme from this poem by Robert Frost: "To say that for destruction ice / Is also great / And would ________."

This is from Frost's poem "Fire and Ice". In this case, the rhyme is with the line before the previous line, which ends in "ice." In the poem, Frost rhymes "ice", "suffice", and "twice".
14. Which of the following pairs of words is an eye rhyme?

Eye rhymes are words that look alike but do not rhyme. For example, both "wind" and "mind" end in "ind," but "mind" rhymes with "kind" and "wind" (as in air) rhymes with "sinned". "Wind" (as in turning or twisting something) si anactual rhyme with "mind". "Home" and "tome" are actual rhymes, as are "cat" and "hat".
15. Here is a brief, original poem I wrote. Fill in the missing word with the only word that rhymes and makes sense in the context of the poem: "They called Ulysses hero because he chose to ____ / Leaving all the confines of wife and hearth and home; / But it takes a stronger man to stay his wandering feet, / And to keep a loving home is a glory just as sweet."

Other words that rhyme with "home" but which do not make sense in the context of the poem include "dome," "foam," and "tome."
Source: Author skylarb 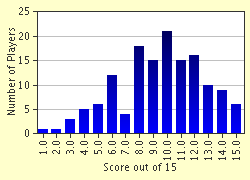 Related Quizzes
This quiz is part of series Mixed Poetry:

All of my poetry quizzes that don't fit in other categories.