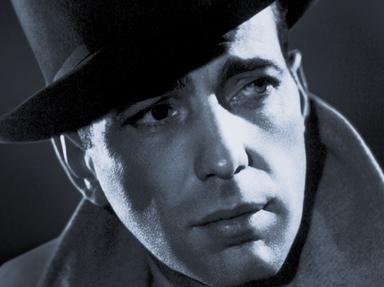 Try to match the characters that Humphrey Bogart plays with the movies that he played them in. The questions come in groups of four (you can use process of elimination) and get progressively harder.

All movie titles and character names were verified at the official Humphrey Bogart website
2. Rick Blaine?


Answer: To Have And Have Not

The movie that first teamed him with Lauren Bacall
7. Fred C Dobbs?


Answer: The Treasure Of The Sierra Madre

Tough name to remember. But not hard to figure out. A switch-Bogie is the star, Edward G Robinson is the supporting actor.
9. CLASSIC GANGSTERS (Bogart fans should get these):Duke Mantee?

Another tough name. I had to look it up myself, but it's not impossible. Recently remade.
12. Roy Mad Dog Earle?


Answer: In A Lonely Place

That was too easy, unless you thought it was a trick question.
15. Vincent Parry?

With Lauren Bacall. I know it's not a very memorable name.
16. Rip Murdock?

One of my favorites. To me, this movie and 'This Gun For Hire' are Film Noir
17. MORE GANGSTERS:Chips McGuire?


Answer: It All Came True


Answer: All Through The Night

Bogie plays second fiddle to Edward G Robinson.
21. I can't believe he did that! (You have to watch anything that he's in to get these.): Whip McCord?

Bogart in a western?! Come On! Next you'll say Cagney was in one,too!
22. SGT Joe Gunn?

A great movie. Not really a stretch role for Bogart, but it didn't fit into the other catagories and I wanted to include it.
23. Marshall Quesne?


Answer: The Return Of Dr X

I should have put Doctor Xavier, but that would have been too easy. It has to be seen to be believed.
24. Linus Larrabee?

It's considered a classic, but it's somewhat of a wimpy role. Linus Larrabee? What happened to Bugs, Rocks, Duke, Mad Dog, etc.
25. BONUS QUESTION (If you get this, you're better than I am!): Harve?


Answer: Three On A Match

OK that wasn't fair. I've never seen that one myself, but I like that name! Plus I get to list some of my lesser known favorites.
Source: Author buckmanboston 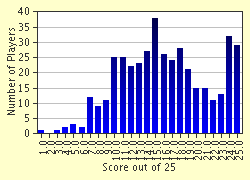 
Other Destinations
Explore Other Quizzes by buckmanboston