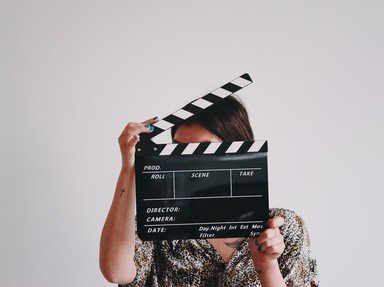 Here are some quotes from my movie collection. Choose which movie that the quote is from. Good luck.

Share on Facebook
Share on Twitter
Share by E-Mail
Author
MovieQueen3
Time
5 mins
Type
Multiple Choice
Quiz #
222,017
Updated
Dec 03 21
# Qns
10
Difficulty
Tough
Avg Score
6 / 10
Plays
2342
This quiz has 2 formats: you can play it as a or as shown below.
Scroll down to the bottom for the answer key.

Quiz Answer Key and Fun Facts
1. "That night he made me a vampire. He gave me the strength to avenge my family. Since then I've never looked back."

Selene (Kate Beckinsale) says this to Michael (Scott Speedman). She is referring to her past. Viktor is the vampire who saved her from the Lycans that night and made her what she is. Selene is a vampire. Michael and Selene are in the safe house when he asks her why she hates the Lycans so much.

This film is about a female vampire (Kate Beckinsale) who is in battle with the werewolf race. She ends up falling in love with (Scott Speedman) a werewolf.
2. "Make a move and the bunny gets it."

Cyrus (John Malkovich) holds a gun to the stuffed bunny that Poe got his daughter for her birthday. Cyrus is going to shoot the bunny in the head until a helicopter starts shooting at their plane. Diamond Dog finds the Bunny in Poe's box of personal things as well as a letter from his daughter. Cyrus does this because he finds out who the traitor is. Diamond Dog (Ving Rhames) goes through his box and finds a letter that says he is going to be released today, and has no reason to stay on the plane. Cameron Poe is trapped on the plane because he decides to stay to make sure his friend gets his medicine.
3. "I can avoid being seen if I wish...But to disappear entirely, that is a rare gift."

Aragorn (Viggo Mortensen) says this to Frodo (Elijah Wood) in the Prancing Pony after the ring slips on his finger and makes him disappear. The Prancing Pony is located in Bree, this is where Gandalf is supposed to meet Frodo and the other hobbits but doesn't show up.

This movie is about hobbits, elves, men and dwarfs who unite to destroy a powerful ring because it can cast evil powers. They face many obstacles along the way.
4. "Sometimes you can still catch me dancing in it."

The old Kim Boggs (Winnona Ryder) says this because Edward was sculpting an ice statue of her and there was snow flying around. She was telling her granddaughter about herself when she was a teenager. The first time it snowed where she lived was when Edward (Johnny Depp) was sculpting an ice statue and snow was flying every where. That's why she says "sometimes you can still catch me dancing in it." This Tim Burton movie is about an uncommonly gentle man who has scissors for hands. An Avon represenative finds him, and brings him home to join her family.
5. "Do you like pain? Try wearing a corset!"


Answer: Pirates Of The Caribbean: The Curse Of The Black Pearl

Elizabeth Swann (Keira Knightly) says this quote. She says this to a pirate after he says to Will Turner (Orlando Bloom) "I'm gonna teach you the meaning of pain!" Elizabeth then replies with that quote and hits him with a pole. This scene occurrs at the same time Jack Sparrow (Johnny Depp) and Barbossa (Geoffrey Rush) are sword fighting, and Elizabeth and Will were fighting other pirates.

This movie is about a Pirate named Captain Jack Sparrow, who is on a mission to save the governor's daughter in order to try and get his ship back.

The pirates who have taken Elizabeth are cursed and immortal. In order to lift the curse and become mortal they need the pirate medallion, and Will's blood.
6. "No I didn't. Honest... I ran out of gas. I, I had a flat tire. I didn't have enough money for cab fare. My tux didn't come back from the cleaners. An old friend came in from out of town. Someone stole my car. There was an earthquake...a terrible flood...locusts. It wasn't my fault, I swear to God! "

Elwood Blues (Dan Aykroyd) and 'Joliet' Jake Blues (John Belushi)are escaping into an underground tunnel when they run into Jake's girlfriend. She has been trying to get even with him by trying to kill him in various attempts throughout the movie. She keeps shooting at them until Jake confronts her and says this quote about why he never showed up to their wedding, and left her standing at the altar.

This movie is about two brothers who are trying to get their band back together in order to help the Catholic home where they grew up. John Landis directed this movie in 1980.
7. "Before this war is over, I am going to kill you."

Benjamin Martin (Mel Gibson) says this to Colonel William Tavington (Jason Isaacs) when he is leaving Gen. Cornwallis' (Tom Wilkinson) place and he accidentally meets up with Tavington. Martin is there to get the hostages and he gets them by playing a trick on the General.

This film is about a farmer who ends up leading the Colonial Militia during the American Revolution, after a British officer kills his son.
8. "Ah. Well... I attended Juilliard... I'm a graduate of the Harvard business school. I travel quite extensively. I lived through the Black Plague and had a pretty good time during that. I've seen the Exorcist about a hundred and sixty-seven times, and it keeps getting funnier every single time I see it!. Not to mention that you're talking to a dead guy...Now what do you think? You think I'm qualified?"

Beetle Juice (Michael Keaton) says this to Barbara, (Geena Davis) and Adam Maitland (Alec Baldwin) when they dig him up from his grave. They need his help because they want the people currently living in their house to leave. First they ask if he is qualified, and he replies with this quote. Made in 1988 this movie is about two recently dead ghosts who hire a 'bio-exorcist' to get rid of the new owners of their house.
9. "I am the one hiding under your bed, teeth ground sharp and eyes glowing red."


Answer: The Nightmare Before Christmas

In the opening scene of the movie the characters are singing. A creepy creature who is hiding under a bed says this quote. The voice of this character is Kerry Kats. "Nightmare Before Christmas" is a Tim Burton film. Jack Skellington discovers Christmas Town and doesn't quite understand it. Danny Elfman is the music composer of this film just like many other Tim Burton movies.
10. "Every red blooded American knows that the only condiment you are ever supposed to put on a hamburger is ketchup!"

Jimmy 'The Tulip' Tudeski (Bruce Willis) says this to Oz (Matthew Perry) when he first moves in. Jimmy is telling Oz how much he hates mayonnaise on his hamburgers. This movie involves a dentist who is sent by his wife to go to Chicago and inform the Mob boss that Jimmy Tudeski is alive, so his wife can get money for finding Jimmy.
Source: Author MovieQueen3

This quiz was reviewed by FunTrivia editor skunkee before going online.
Any errors found in FunTrivia content are routinely corrected through our feedback system.
Most Recent Scores
Dec 05 2022 : Guest 101: 7/10
Nov 28 2022 : Guest 73: 5/10 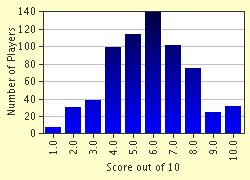 
Other Destinations
Explore Other Quizzes by MovieQueen3

Go to Which Movie Quizzes