Born Richard Walter Jenkins on November 10, 1925, Richard Burton became one of the greatest film stars of his generation. This quiz is about some of his best films and those who were invovled in the creation of these classics.

Quiz Answer Key and Fun Facts
1. Richard Burton's first role in a Hollywood film netted him his first Oscar nomination as Philip Ashley in "My Cousin Rachel" (1952). His co-star was Olivia de Havilland who played the title character. Who directed this classic film?

Henry Koster also directed "The Bishop's Wife" (1947), "Harvey" (1950) and "Flower Drum Song" (1961).
2. Following the success of "My Cousin Rachel" Richard Burton played the role of Marcellus Gallio in "The Robe" (1953). Based on the novel by Lloyd C. Douglas, Richard once again garnered an Oscar nomination, this time for Best Actor. Who played his leading lady?

Jean Simmons played Diana. Among her other films are 1955's "Guys and Dolls",
"Spartacus" and "Elmer Gantry". The latter two films were released in 1960.
3. In 1959 Richard starred in "Look Back In Anger". This film garnered The (US) National Board of Review's Award for Best Foreign Film as it was a British Film. Who directed this film? He later won an Oscar for Best Director for 1963's "Tom Jones".

Tony Richardson was one of the British New Wave directors. He guided seven actors in Oscar nominated roles including Jessica Lange's win for Best Actress in "Blue Sky" (1994).
4. 1963 brought us "Cleopatra" where Elizabeth Taylor and Richard Burton started their affair which became worldwide news. The director has stated that much of Richard's great acting as Marc Anthony was left on the cutting room floor. He also directed the 1950 classic film "All About Eve". Who directed "Cleopatra"?

Joseph L. Mankiewicz's last film was 1972's "Sleuth" which starred Laurence Olivier and Michael Caine.
5. In 1964 Richard Burton starred in "Night Of The Iguana" (1964), as Rev Dr. T. Lawrence Shannon, based on Tennessee Williams' play of the same name. In addition to having Ava Gardner, Deborah Kerr and Sue Lyon as co-stars, a Hollywood legend directed this film. He directed both his father and daughter to Oscar wins. Who was he?

John Huston's first film as a director was the film noir classic, "The Maltese Falcon" (1941). His final film was "The Dead" (1987) based on James Joyce's novella.
6. In 1965 Richard Burton starred as Alec Leamus in "The Spy Who Came in from the Cold" (1965), based on John le Carré's book of the same title. His co-star was Claire Bloom, with whom Burton had an off-screen romance years earlier. The director chose to film in black and white. He also directed Sally Field to her first Oscar win for "Norma Rae" (1979). Who was he?

One great quote from this film was when (Richard Burton) Alec Leamus narrated, regarding his relationship with (Claire Bloom) Nan Perry. "She offered me free love. At the time it was all I could afford." Martin Ritt seems to be underrated as a Director today but he directed some great films including "Hud" (1963), "Sounder" (1972) and "The Molly Maguires" (1970).
7. In 1966 Richard Burton's next film was nominated for 13 Academy Awards. Burton's performance earned another nominaton and his wife at the time, Elizabeth Taylor, earned her second Best Actress Oscar. Adapted from Edward Albee's play of the same name, "Who's Afraid Of Virginia Woolf" was directed by a first time director. Who is he?

This was possibly Richard Burton's best opportunity to win the Oscar. In a brilliant film both female leads, Elizabeth Taylor, (Best Actress) and Sandy Dennis (Best Supporting Actress) took home statuettes. Mike Nichols went on to win an Oscar in 1967 for "The Graduate".
8. In 1968 Richard Burton starred in "Where Eagles Dare". His co-star was another Hollywood legend who has won Oscars for both Best Picture and Best Director, twice for 1992's "Unforgiven" and "Million Dollar Baby" (2005). Who is he?

They made quite a team. The following year Clint appeared in 1969's "Paint Your Wagon." It was his only musical.
9. "Anne of the Thousand Days" (1969) provided Richard Burton with another Oscar nominated role as Henry VIII. In her first English speaking role, Genevičve Bujold was also nominated for an Oscar potraying Henry VII's second wife, Anne Boleyn. Based on Maxwell Anderson's play of the same name, who produced this film?

In addition to having produced several of Elvis Presley's early films and John Wayne's Oscar winning turn as Rooster Cogburn in "True Grit" (1969). Hal B. Wallis was nominated 16 times for the Academy Award for Best Picture winning just once for the 1942 classic "Casablanca".
10. Richard Burton's final film appearance was in Michael Radford's film "Nineteen Eighty-Four", based on the novel of the same name. Who wrote it?

George Orwell was born in Motihari, India. He was one of the most influential authors of the 20th Century. His real name was Eric Arthur Blair.
Source: Author Artbell 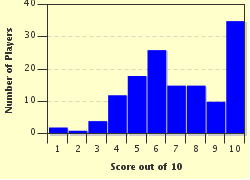 
Other Destinations
Explore Other Quizzes by Artbell