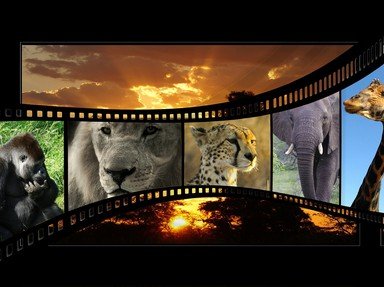 Rabbits in movies? Who'd have thunk it? Well, apparently a lot of people. All of these films contain rabbits of one sort or another. Let's hop to it! (Note: No rabbits were harmed in any way during the making of this quiz.)

Quiz Answer Key and Fun Facts
1. What kind of grown man passes his time away talking to invisible bunnies? Well, Elwood P. Dowd for one. Jimmy Stewart portrays this lovable gentleman who, despite his sister's attempts to have him locked away, manages to help a young couple find love. What is the name of his giant friend with the big bunny ears?

The 1950 film 'Harvey' is an all-time classic comedy, featuring a wonderfully understated performance by James Stewart and a miraculous supporting job by the six foot three and one half inch hare (technically, a 'pooka') named Harvey (who never has to say a word!)
2. Several versions of this John Steinbeck novel have appeared on film. All have one massively important theme in common, namely bunnies. What is the title of this novel, made into a feature film in both 1939 and 1992?


Answer: Of Mice and Men

The 1992 version of 'Of Mice and Men' featured John Malkovich as as the bunny-loving Lennie Small and Gary Sinise as George Milton. Lon Chaney, Jr. and Burgess Meredith, respectively, take on the two roles in the 1939 version. Basically, the story is about two men who just want to find work during the dark days of the Great Depression.

Unfortunately, Lennie's love for small, soft, beautiful things (like bunnies) leads to an inadvertent murder.
3. 'Watership Down' is an animated 1978 version of a fascinating story about a warren of rabbits who seek out a new place to live, after their home has become threatened. Who is the author of the story upon which this excellent animated film is based?

The 1978 animated film is directed by Martin Rosen and features the voices of John Hurt, Ralph Richardson and Denholm Elliot. A wonderful animated epic, it is a bit violent and not recommended for small children.
4. To 1988 we go, where we discover a part live-action, part animated film about a certain cute rabbit with an eye-popping wife named Jessica and a pronounced lisp. What is the name of this poor, hunted creature?

Roger Rabbit is the animated star of the outrageous Robert Zemeckis-directed comedy 'Who Framed Roger Rabbit?' Charles Fleischer offers his voice talents to the zany Roger, while Bob Hoskins and Christopher Lloyd appear in live action as Roger's pal Eddie and the evil Judge Doom, respectively. Oh yes, let's not forget Roger's knockout wife, Jessica Rabbit, sensually voiced by Kathleen Turner. Even Bugs Bunny took time out of his busy schedule to make a brief appearance in this film.
5. Yet another animated film, this one the all-time Disney classic from 1942, entitled 'Bambi'. What is the name of the all-important rabbit co-star to the beautiful deer Bambi in this charming movie?

Thumper is Bambi's outspoken lagomorph pal. Who can forget the chatty Thumper sliding on the frozen ice, or uttering the classic line, 'If you can't say something nice... don't say nothing at all'...certainly not yours truly!
6. Okay, now it's time for a smooth transition. We go from wonderful animated Disney classic, to a frightening thriller featuring stewed bunny rabbit. What was the name of the intense 1987 film that featured Glenn Close committing bunnycide?

I feel guilty having to place this question right after one about the wonderful 'Bambi' (actually, I really don't), but it had to be done. In 'Fatal Attraction', Glenn Close plays Alex Forrest, a woman obsessed with a married man named Dan Gallagher (Michael Douglas) with whom she has shared a brief affair. Things really get out of hand when Alex somehow manages to enter the Gallagher home and makes rabbit stew out of Gallagher's daughter's beloved pet.
7. From the dark to the surreal, which 2001 film features a character who tromps around in the nightmarish visions of the lead character dressed in a demonic rabbit suit?

'Donnie Darko' is the story of a high school student who averts death, only to find himself involved in a bizarre chain of events that seem to be leading towards some fateful, culminating outcome. Donnie is commanded, in a dreamlike state, to put the chain of events into motion by a mysterious figure dressed in the bunny suit from hell.
8. Returning to the theme of cruelty to rabbits, in which Coen Brothers movie does an unsuspecting little bunny rabbit have a hand grenade lobbed in its general direction?

'Raising Arizona' is the uplifting tale of a young family trying to make their way in the new American West, despite trouble from outlaws and bandits of every sort. In one seemingly insignificant scene, the Randall Tex Cobb character heaves a hand grenade at an innocent bunny, taking the life of the delicate little creature.

This scene is not so insignificant when one realizes that the bunny symbolizes the Nicolas Cage character, namely H.I. McDunnough, and the hand grenade symbolizes the trials and tribulations of life. (And, if you believe that, I have a bridge to sell you.)
9. Delicate little rabbits play a role in the 'Lord of the Rings' trilogy as well. In the second film, namely 'The Two Towers', which character cooks up a dainty little rabbit for himself and his good pal Frodo to eat?

While Gollum rants and raves about raw fish, Samwise is a bit more practical. On his quest with Frodo Baggins to extinguish the evil ring of Sauron (whose name I happily added as an interesting alternative incorrect choice for you), Samwise cooks up a coney (aka a rabbit) that Gollum has discovered and prepares it for himself and his weakening companion Frodo.
10. Last, but surely not least, let's talk about the most deadly, ferocious, vicious, vile, horrendous, bloodthirsty, menacing, grim, (insert your own fearsome adjective here) bunny of all-time. In which 1975 comedy film, by Monty Python, do we encounter this deadly creature who guards the cave of Caer Bannog?

The Pythons take us on a quest with King Arthur to seek out the Holy Grail in this monumental 1975 epic.

In the ultimate revenge moment for the taxonomic family Leporidae, the fearsome rabbit who guards the cave of Caer Bannog takes out several of King Arthur's bravest knights before succumbing to the deadly force of the Holy Hand Grenade (seemingly the only effective weapon against bunnies, as this quiz has made clear).

I hope you have enjoyed this traumatic, but hopefully interesting, quiz. Thanks for playing.
Source: Author thejazzkickazz 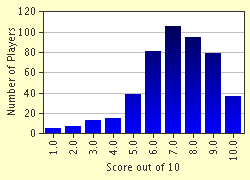