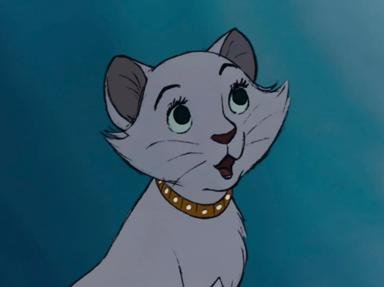 In 1970 the Walt Disney company brought us this fine animated movie about four spoiled cats. What do you remember? Warning: spoilers ahead.

The opening credits showed the title "The Aristocrats". But then one of the kittens removed the second "R" and pushed the letters together, so the correct title "The Aristocats" would appear.
The movie is set in Paris 1910, where a female cat and her three kittens lived their lives of luxury in a mansion inhabited by a single lady from the aristocracy.
As explained in the script (which was also published as a children's book), the lady intended to call her cats the "aristocratic cats", but this was too long. So she shortened it to "the Aristocats".
The opening credits were accompanied by the song "The Aristocats" by Maurice Chevalier (1888-1972).
The false titles I provided may highlight some elements of the plot, but they are all figments of my imagination.
2. The female star of the movie was a white cat with blue eyes, determined to educate her three kittens to well-mannered members of the feline upper class. What is the name of this stylish cat?

As clearly indicated by her name, this was not an ordinary cat - she was a respected member of female nobility. Her name was Duchess, not one of the ruling class but a high ranking among nobility.
Duchess was very fond of Madame Adelaide (Bonfamille). She would frequently cuddle her "Madame" and could be found often in her arms.
In her relation with the other animals, Duchess always insisted on maintaining the etiquette, although at times she could not suppress a giggle.
The role of Duchess was voiced by Eva Gabor (1919-1995), but her songs were voiced by Robie Lester (1925-2005).
There are many princesses in various Walt Disney movies (remember for instance "Cinderella" or "Snow White and the Seven Dwarfs"), but not a single princess appeared in "The Aristocats".
I've always had pet cats, and my friends and colleagues usually considered my pet cats to be the real-life incarnations of the Aristocats.
3. The three kittens in the movie each had their own talents. Toulouse was a painter, Berlioz played the piano, but what was Marie's talent?

Toulouse, the eldest kitten (a ginger kitten) was aspiring to be a painter - as his name indicated (his name was derived from the French painter Henri de Toulouse-Lautrec). Berlioz, the youngest kitten (a blue one - truly blue that is, not the grey colour that is named blue in cat standards), played the piano. His name also pointed at his talent: he was named after the French composer and conductor Hector Berlioz.
Marie, the white kitten, had a talent for singing - as well as her mother Duchess. This is revealed in the scene "Scales and Arpeggios", where Berlioz played a happy tune (soon to be joined by Toulouse), and Marie sang first solo, then in a duet with her mother Duchess.
Gary Dubin (1959-2016) voiced Toulouse, Dean Clark voiced Berlioz, and Liz English (born 1962) voiced Marie. Amazingly I didn't found any biographic data about Dean Clark.
Real-life cats do sing sometimes, although Dutch idiom has equaled cat's song with cat's whining. To cat lovers as myself, a cat duet can be quite ravishing.
4. Early in the movie, Madame Adelaide had invited her notary, named Georges Hautecourt, to record her last will and testimony. Was this notary in his thirties?

The notary arrived in a sports car. When he got out of the car, he mumbled "Not as spry as when I was eighty". So he was more than eighty years. Although he would be considered (at the time - the movie plays in 1910) a very old man, he still was young at heart. When the butler suggested to take the elevator, the notary replied "That birdcage? Poppycock! Elevators are for old people. Whoops!".
When the notary finally entered the room where Madame Adelaide awaited him, the song "Habanera" from Bizet's opera "Carmen" was played on the phonograph. Adelaide and Georges remembered having met at one of the performances of this opera, where Adelaide played the title role.
The roles of Madame Adelaide and the notary were voiced by Hermione Baddeley (1906-1986) and Charles Lane (1905-2007), respectively.
5. Madame Adelaide indicated in her last will and testament that all her possessions would have to go to her cats. Edgar the butler overheard this while he was performing a typical household chore. What was Edgar doing when he heard Madame dictating her last will and testimony?

Edgar was ironing his pants doing this scene. Contrary to what most people would do, he wore no pants at that moment, intending to put on his freshly-ironed pants. Madame announced that she had no living relatives, and so all her fortune would go to her cats, with instructions for Edgar to take care of them. At first the notary thought the entire estate would go to Edgar, who already saw himself very rich, but Madame corrected this quite rapidly.
Edgar then ventured in an odd calculation: "each cat will live about twelve years - and each cat has nine lives! That makes four times twelve times nine..."
While not following up with his calculation, Edgar then concluded that he could only lay his hands on the inheritance if the cats were gone. So he devised a plan to get rid of them.
Roddy Maude-Huxby (born 1930) voiced Edgar the butler.
Back to the ironing mentioned in the question: some real-life cats do like to "iron" freshly done laundry in their specific method. Alas, most of the time I was not exactly content with the result when my pet cats thus tried to help me.
6. Edgar made the "crčme de la crčme ŕ la Edgar" - warm cream with a full bottle of sleeping pills, and served this to the Aristocats. A mouse came to partake of this meal. What was the mouse's name?

Roquefort was the name of the mouse - not one of the other French cheeses I've mentioned here.
Roquefort entered the room and asked politely to dip a cracker in the cream, and the cats agreed. When Roquefort had finished his cracker and returned to his hole, in order to fetch another cracker, the cats and the mouse fell fast asleep. That was the moment Edgar waited for: he abducted the cats to drop them somewhere in the countryside.
Sterling Holloway (1905-1992) did the voice part for Roquefort.
Real pet cats may enjoy a dish of cream, but it is not always healthy for them: many cats have an allergy for milk products.
7. On his way to dispose of the cats, Edgar on his motorcycle was attacked by a bloodhound and a basset hound. What was the name of the bloodhound, the leader of this comic duo?

Napoleon was the name of the bloodhound and Lafayette his aide, the basset. Napoleon made it perfectly clear he was the leader, and he told Lafayette what to do. Lafayette was ordered to bite at the tyres of the motorcycle, while Napoleon would "go right for the seat of the problem" - meaning he would try to bite the intruder in the part of his anatomy on which he was seated.
In the ensuing chase everyone forgot the basket with the cats, abandoned near a river.
Napoleon was voiced by Pat Buttram (1915-1994) and Lafayette by George Lindsey (1928-2012).
8. The cats were rescued by a ginger tomcat, who helped them back to Paris. What was the name of this alley cat?

It was "Abraham DeLacey, Giuseppe Casey, Thomas O'Malley the alley cat" who found our lost aristocats. He fell in love at first sight with Duchess, and agreed to bring all of them home to Paris by means of a "flying carpet". In order to do so, he jumped on the windshield of a milk truck, and while the enraged chauffeur tried to crank back into action the engine, Thomas and the aristocats made themselves a comfortable bedding in the back of the truck. Thomas even treated everyone on "breakfast" - an open can of milk.
Alas, the chauffeur discovered Thomas and the other cats once more and chased them away. They then decided to follow the railroad home - which led to another unfortunate event. When avoiding an approaching train, Marie fell in the river and Thomas jumped after her to rescue her - only to find out he could not swim. A pair of geese (Abigail and Amelia Gabble) eventually saved his life.
Phil Harris (1904-1995) spoke the role of Thomas O'Malley. The geese were voiced by Monica Evans (born 1940) and Carole Shelley (1939-2018).
9. Back in Paris, the Aristocats first met Uncle Waldo - the uncle of the two geese who saved Thomas O'Malley. Later they found a band of musical alley cats. What was the song all the cats performed together?


Answer: Everybody Wants to Be a Cat

"Everybody Wants to Be a Cat" is the answer we were looking for. It was performed by the characters Scat Cat (on trumpet), Shun Gon the Chinese cat (piano and percussion), Hit Cat the English cat (playing the acoustic guitar), Peppo the Italian cat (on accordion), Billy Boss the Russian cat (playing the double bass) and Thomas O'Malley (vocals), with the support of Duchess, Marie, Toulouse and Berlioz singing along later on.
The voice actors for the jazzy band were Scatman Crothers (1910-1986, Scat Cat), Paul Winchell (1922-2005) as Shun Gon, Lord Tim Hudson (born 1940) as Hit Cat, Vito Scotti (1918-1996) as Peppo and Thurl Ravenscroft (1914-2005) as Billy Boss. Uncle Waldo was voiced by Bill Thompson (1913-1971).
The red herrings are songs from other (partly) animated movies with a cat as main character. "Diablo Rojo" (translated as "Red Devil") is from "Puss in Boots" (2011), "Cat Scratch Fever" comes from "Garfield: A Tail of Two Kitties" (2006) and "Perfect Isn't Easy" stems from "Oliver & Company" (1988).
10. In the finale, Edgar once again trapped the cats and planned to ship them to Timbuktu. But Roquefort gathered all the alley cats, and with the help of Madame Adelaide's horse they turned tables on Edgar. What was the name of the horse?

Frou-frou was the one we were looking for. When Edgar had catnapped the Aristocats once again, the mouse Roquefort warned O'Malley and then the musical alley cats. O'Malley arrived first and was pinned to the wall with a pitchfork, but then every alley cat took hold of Edgar: one on each arm, one on each leg, and one on top of his head. Roquefort unlocked the chest in which the aristocats were trapped, O'Malley trapped Edgar with a headstall, and Frou-frou kicked the devious butler into the chest. A bit later a truck came and shipped Edgar to Timbuktu.
Frou-frou was voiced by Nancy Kulp (1921-1991).
All ended well for the Aristocats, but also for the alley cats: Madame Adelaide adopted Thomas O'Malley and rearranged her last will and testimony so to include all the alley cats. All the characters concluded the movie singing "Everybody Wants to Be a Cat": the alley cats, the Aristocats, Roquefort and Frou-frou, Madame Adelaide and the notary, Amelia and Abigail Gabble and their uncle Waldo, and finally Napoleon and Lafayette - who then had a quip about who was to announce "the end".
Source: Author JanIQ

Related Quizzes
This quiz is part of series universal challenge 2018:

For the third year I scheduled the month November to write a quiz... per category. Here they are. Have fun!