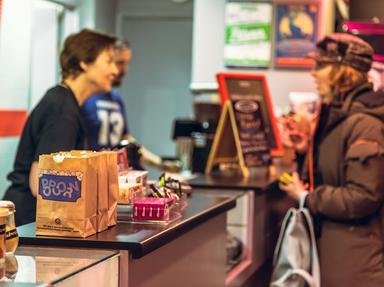 This 1918 Arbuckle/Keaton film actually features both men as bell boys.

Share on Facebook
Share on Twitter
Share by E-Mail
Author
ubermom
Time
5 mins
Type
Multiple Choice
Quiz #
319,830
Updated
Dec 03 21
# Qns
10
Difficulty
Average
Avg Score
7 / 10
Plays
153
This quiz has 2 formats: you can play it as a or as shown below.
Scroll down to the bottom for the answer key.

Quiz Answer Key and Fun Facts
1. Roscoe Arbuckle and Buster Keaton work at the Elk's Head Hotel: "Third class service -- first class prices." We first see Roscoe as he exits the elevator, glances left and right, and slips something casually out of his mouth. What?

Roscoe smokes until desk clerk Al St. John (Roscoe's nephew) rings the bell. Buster emerges from a pile of newspapers, and Roscoe dumps the lit cigarette into the coffee urn. With snappy salutes, the two bell boys report for duty.
2. Al sends Roscoe and Buster to fetch the departing guests' bags from their rooms. Then he takes off his coat and dons a cap. Al serves double duty with these guests. He steps away from his job as desk clerk to do what?

Later in the film, Al will turn waiter, but not until after he's served his stint as trolley driver.

Buster and Roscoe toss the guests' luggage into the trolley in a reckless manner demonstrating that stereotypes of careless baggage handlers haven't changed.

Arbuckle, Keaton, and St. John acted together in virtually all of the two-reelers filmed during Arbuckle's tenure at Comique. Buster left the crew temporarily to serve in World War I, but eventually returned to the fold.
3. With Al busy, Buster and Roscoe turn to spring cleaning. First we see Buster cleaning the the phone booth. What does he do that's odd?

In a beautiful piece of pantomime, Buster scrubs at a bit of glass, fogs it with his breath, scrubs again -- then leans through the glassless window to tackle the stubborn spot from the other side. He picked up his pantomime skills during his years performing in vaudeville with his parents.
4. While Buster cleans the phone booth, Roscoe tackles the lobby floor. What unorthodox approach does he use?


Answer: He scrubs and mops sitting down.

Roscoe scrubs the floor between his legs, mops up the extra water and suds, then scoots over to the next spot.

Buster comes over to rinse his rag out in Roscoe's bucket -- to reveal that his rag is a pair of undershorts.
5. Buster and Roscoe are frightened by an evil-looking character bearing a creepy resemblance to Rasputin. But the man's intentions are of an innocent sort. What does he want?


Answer: A shave and a haircut.

A terrified Buster dives over the desk, miming to Roscoe that the devil himself is behind him. (Note Buster's truncated right index finger -- he caught it in a wash wringer as a small child.) Roscoe, at the sight of the terrifying guest, dives over the desk as well. But our Rasputin-like character minces about in a most foppish way, putting the nervous bell boys much more at ease. He and Roscoe end up playing Patty-Cake as a bemused Buster lolls on the desk and watches. (Watch for the Keaton smile!)

The game over, Roscoe turns barber, transforming Rasputin by stages into General Grant, Abraham Lincoln, and Kaiser Wilhelm.
6. After being distracted by the arrival of Miss Cutie Cuticle, the new manicurist, Roscoe and Buster return to work, with Roscoe finishing up with Rasputin, and Buster taking over the mopping. In comes a top-hatted guest -- none other than Buster's father, Joe Keaton. He physically abuses the innocent Buster and Al because he thinks they're doing what?


Answer: Knocking off his hat

Roscoe is sending towels back and forth to the kitchen via an overhead basket on a wire, which keeps knocking Joe's hat off when his back is turned. We see a brief continuity error, as a close-up of Buster letting mop water fill Joe's hat shows Buster's feet in the wrong position and place. Of course, Joe puts on the hat and gets a dousing -- which prompts a rare laugh from Buster.

Joe kicks his son in the posterior a few times, and kicks a tray out of the hands of a hapless Al, now turned waiter. For some reason Buster joins in on the abuse, kicking Al into the dining room. There, Al does an amazing tumble over the table and back-handspring into a chair, where he lands casually, as if he'd been reading a newspaper there all along.
7. More guests arrive, and it's time for another mishap. Who gets his head stuck in the elevator?

The horse-drawn elevator is controlled by Al, who is having trouble with the old nag. Roscoe's attempts to rescue his stuck friend just cause more problems, including smacking Buster repeatedly in the face with a board as he tries to wedge him out.

Finally the elevator rope breaks, dropping the car and launching Miss Cuticle onto the antlers of a mounted elk head. Buster springs from the board to Roscoe's shoulders and rescues the girl -- dropping her into the waiting Roscoe's arms -- only to be left hanging from the antlers by the seat of his pants.
8. Though it's clear Miss Cuticle has already fallen for him, Roscoe nevertheless want to impress her. He enlists the help of Al and Buster. What's his plan?


Answer: They're to fake a bank robbery so he can foil it.

Al and Buster dive behind the desk and come up wearing masks. They unload picks, shovels, and other bank-robbery tools and set off on their task.

Of course, Al and Buster arrive only to find real bank robbers already at work. Buster treats us to some amazing acrobatics over the tops of partitions.
9. Roscoe has a problem at the dance while he's waiting for Buster and Al to set him up as a hero. What's his problem?


Answer: Miss Cuticle dances by standing on his feet.

Roscoe doesn't have a wife in this movie. Miss Cuticle remains enchanted with him, but plants her pointy toes right atop poor Roscoe's toes.
10. Roscoe's plan goes awry in a way that lets all three young men turn out to be heroes. Though it's a joint effort, only Roscoe is given the reward. Still, he generously hands it over to Al and Buster. But they toss it aside and skulk away. Why?


Answer: Because Roscoe gets the girl

At first Al and Buster eagerly count their money -- fistfuls of it. But then they look at Roscoe, getting love and admiration from Miss Cuticle. What's the point of money without a girl to spend it on?
Source: Author ubermom

Go to B Quizzes