The Hills Have Eyes Trivia Quiz

These questions are from the original motion picture "The Hills Have Eyes" (1977).

Quiz Answer Key and Fun Facts
1. Who did Dee Wallace play in the movie?

Dee Wallace is perhaps best known for the role she played in "E.T". In this movie she played Lynne Wood, a victim of the cannibals. She was killed by Mars, who shot her twice.
2. What were the names of the two German Shepherds in the movie?

Both dogs were adored by the family. Beauty was killed early on by Mercury. Beast exacted his revenge on him, by pushing him off a cliff. Now that is justice.
3. Who was the first of the cannibals to die?

Mercury was a bit on the eccentric side. During his conversation with Pluto we found out he liked baby toes. He met his demise at the paws of Beast. He was played by Peter Locke.
4. What was the daughter's name, in the cannibal's clan?

She was helpful in the end. She got the baby back to her father. She was portrayed by Janus Blythe who also revived her role in the sequel to the movie.
5. Who was the director of this movie?

This was Wes's second horror movie. He is perhaps best known for "The Nightmare on Elm Street" movies, although he was only associated with three of the series.
6. How did Bob die?


Answer: lit on fire by the cannibals

Bob had stakes driven through his hands and was then set on fire by the cannibals. This all happened in front of his family. Doug did manage to free him but it was to late. We actually saw smoke coming from his mouth.
7. Who killed Papa Jupiter?

He was tricked into opening the camper door, which then exploded. It was not good enough to kill him though. He was shot by Bobby several times before he died.
8. What were Jupiter's children's names?

Papa Fred told Bob, when he went back to the gas station, that Jupiter had stolen himself a whore and had a bunch of kids. He also burned their house down and killed his sister. Jupiter killed his father for trying to leave.
9. What was the name of Doug and Lynne's daughter?

She was the daughter of Doug and Lynne Wood. She was carried off by Pluto only to be returned by Ruby. She was portrayed by Brenda Marinoff. Brenda also revived her role in the sequel.
10. When Mars was going to kill Katy, what was in the blanket instead of the baby?

The cannibals stole the piglet earlier from Papa Fred. When Bobby went to the truck we saw the cage was empty. The piglet ran out from the blanket leaving Mar's highly upset.
Source: Author rieker01 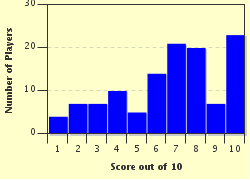 Related Quizzes
This quiz is part of series The Horror Fanatic in Me!:

Some of my all time favorite slasher films!


Other Destinations
Explore Other Quizzes by rieker01