This quiz is on the hard rockin' bad boys of Boston. That's right, I'm talking about Aerosmith. Good luck and have fun.

Quiz Answer Key and Fun Facts
1. Which Aerosmith album was the first to hit the American Top 40?


Answer: Toys In The Attic

Tom Hamilton stated this was the first album in which they started to feel like rock stars.
2. Which Beatles classic did the group record for the 1978 movie "Sgt. Pepper"?

Aerosmith were true Beatle fans. "Helter Skelter" was previously recorded but was not released until their boxed set, "Pandora's Box", was released in 1991.
3. Which one of their early classics was recorded by an 80s rap group?

Run-DMC did this in 1986 with Steven Tyler and Joe Perry on backing vocals.
4. What was the real reason why Joe Perry left Aerosmith in 1979?

They were always at it like cats and dogs.
6. "Permanent Vacation" was the first album with Joe Perry back in the group.

"Permanent Vacation" was their comeback album. "Done With Mirrors" was the reunion album.
7. Which Aerosmith video won Best Video of the Year at the 1994 MTV Video Music Awards?


Answer: I Don't Want To Miss A Thing

It took them 25 years to achieve that goal, but they finally did it.
9. When Steven Tyler conquered his drinking and drug problem, how did he say he felt?

Tyler's drug addiction forced the group to give him a choice to either rehabilitate himself or leave the group.
10. Which of Aerosmith's early classics was considered the first power ballad?

They performed this on MTV 10 in 1991 and it was made into a video afterwards. Eminem made a sample of this song for "Sing For The Monment".
Source: Author diamondjim68 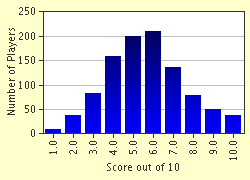