Relient K is my favorite band of all time! This is a quiz on thier two CDs "MmHmm" and "Anatomy of the Tounge in Cheek".

Share on Facebook
Share on Twitter
Share by E-Mail
Author
JesusFreak2o12
Time
3 mins
Type
Multiple Choice
Quiz #
234,264
Updated
Dec 03 21
# Qns
10
Difficulty
Average
Avg Score
7 / 10
Plays
470
This quiz has 2 formats: you can play it as a or as shown below.
Scroll down to the bottom for the answer key.

Quiz Answer Key and Fun Facts
1. In the song "Lion-o" what kind of feline is the singer's favorite?


Answer: The one who wore Cheetah skins

The verse goes
"Chillin' at the lair.
Snarf, me and the twins.
My favorite feline is the one who wore cheetah skins."
2. In the hidden track "Combos and Skittles", what happens if you "deny them Combos and refuse them Skittles"?


Answer: They know it'll be OK

This is the last stanza of the song:
"Deny us Combos
Refuse us Skittles
I admit those words hurt a little
But we know it'll be okay
If you just send some our way".
3. In the song "Breakfast At Timpani's" what were they eating?

"Hey uh good morning Tiffany
I just uh...wanted to thank you
For this amazing breakfast of scrambled eggs and cinnamon toast...
Ummmm delicious!"
4. In the song "The Only Thing Worse Than Beating A Dead Horse Is Betting On One", where do we control the chaos?


Answer: In the back of our minds

"Cause we control the chaos
In the back of our minds
Our problems seem so small
But the grow on us like gravity
But gravity still makes us fall"
5. In the song, who "always said" "May the horse be with you?"

"Like Mr. Ed always said...May the horse be with you!"
6. In the song "What have you Been Doing Lately?" when was the last time the band saw Justin?

"When I saw Justin he said he was just in visiting on spring break
I said 'What a surprise,
You're one of those guys I haven't seen since 1998'"
7. In the song "This Week the Trend" what time was it when it was trendy to wake up?

"And this week the trend
Was to not wake up till 3pm
I picked the few conscious hours that I chose to spend
And slept away the rest of them"
8. In the song "My Girl's Ex-Boyfriend" what is the girl's memory like?

"When he was seeing her.
He could see he had his doubts.
And now he's missing her.
Because you know shes missing out.
And now its haunting him.
Her memory's like a ghost.
And he's so terrified.
Cause no one else even comes close"
9. Matt Hoopes writes MOST of the Relient K songs.

Matt Thiessen writes most of the Relient K songs. In most of the album biographies, it states that he writes the songs with some exception of other members of the band.
10. In the song "Who I Am Hates Who I've Been" what kind of footsteps did he hear?

"And I heard the reverberating footsteps
Syncing up to the beating of my heart
And I was positive that unless I got myself together
I would watch me fall apart"
Source: Author JesusFreak2o12

This quiz was reviewed by FunTrivia editor ralzzz before going online.
Any errors found in FunTrivia content are routinely corrected through our feedback system.
Most Recent Scores
Jan 15 2023 : Guest 98: 9/10
Dec 17 2022 : Guest 98: 9/10 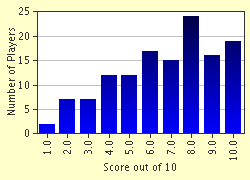 
Other Destinations
Explore Other Quizzes by JesusFreak2o12