How well do you know Elton John's songs? In this quiz I will give you a lyric and you will tell me which song it comes from. Good luck!

Quiz Answer Key and Fun Facts
1. In which Elton John song would you find the following lyrics? "I never knew me a better time and I guess I never will Oh Lawdy mama those Friday nights when Suzie wore her dresses tight"

"Crocodile Rock" is from Elton John's 1973 album "Don't Shoot Me I'm Only the Piano Player". It went to number one in the US and number five in the UK.
2. "I entertain by picking brains Sell my soul by dropping names I don't like those, my God, what's that" What song do these lyrics come from?


Answer: The Bitch Is Back

"The Bitch Is Back" is from Elton John's 1974 album "Caribou". It went to number 15 in the UK charts and did even better in the US by reaching number four. It was written by Elton John and Bernie Taupin.
3. These are the first three lines to which Elton John song? "You could never know what it's like Your blood like winter freezes just like ice And there's a cold lonely light that shines from you"


Answer: Sorry Seems to Be the Hardest Word

"Sorry Seems to Be the Hardest Word" is from Elton John's album "Blue Moves" (1976). It went to number 11 in the UK and number six in the US. It has been covered by many artists including Joe Cocker, Jimmy Scott and boy band Blue.
5. These are the first three lines to which Elton John song? "Guess there are times when we all need to share a little pain And ironing out the rough spots Is the hardest part when memories remain"


Answer: Sad Songs (Say So Much)

"Sad Songs (Say So Much)" is from Elton John's 1984 album "Breaking Hearts". It went to number seven in the UK and number five in the US. It was also a top ten hit in Canada, Austria, New Zealand and Switzerland.
6. The following lyrics are from one of Elton John's most well loved songs, can you name it? "If I was a sculptor, but then again, no Or a man who makes potions in a travelling show"

"Your Song" is a ballad that appears on the album "Elton John" (1970). It reached number seven in the UK and number eight in the US. "Your Song" was listed at number 136 on Rolling Stone's list of "The 500 Greatest Songs of All Time".
7. The following lyrics are the opening lines from which Elton John song? "She packed my bags last night pre-flight Zero hour nine a.m. And I'm gonna be high as a kite by then"


Answer: Rocket Man (I Think It's Going To Be A Long Long Time)

"Rocket Man (I Think It's Going to Be a Long, Long Time)" is from Elton John's album "Honky Château" (1972). It went to number two in the UK and number six in the US. It has been covered by artists such as Kate Bush, The Nixons and Hank Marvin.
8. The following are lyrics from an Elton John song which acheieved great success in many countries. Can you name the song? "Do you ever dream of me Do you ever see the letters that I write When you look up through the wire"

"Nikita" is a song from Elton John's 1985 album "Ice on Fire". It was a number one hit in many countries including France, Ireland, and New Zealand. It went to number three in both the US and UK.
9. "Did I hear you saying that I'm too hard hearted Wipe those stars from your eyes And you'll get quite a surprise" What Elton John song do these lyrics come from?

"Part-Time Love" is from Elton John's 1978 album "A Single Man". It reached number 15 in the UK and number 21 in the U.S. It was written by Elton John with lyrics by Gary Osborne.
10. Which song do the following lyrics come from? "My old man's drunker than a barrel full of monkeys And my old lady she don't care My sister looks cute in her braces and boots A handful of grease in her hair"

"Saturday Night's Alright for Fighting" is from Elton John's album "Goodbye Yellow Brick Road" (1973). It went to number seven in the UK and number 14 in the US. The song was banned on some radio stations because people feared it would incite violence.
Source: Author Velvet_Rain 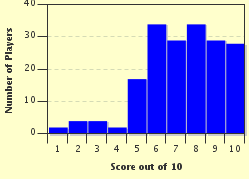 Related Quizzes
This quiz is part of series More lyrics:

A few more of my lyrics quizzes