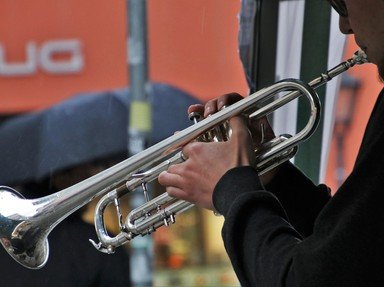 Bebop was a revolution that placed strong emphasis on improvisation and would serve to broaden the Jazz horizon. This quiz endeavours to identify what Bebop is, the influence it has exerted and those who influenced it.

Quiz Answer Key and Fun Facts
1. In which decade of great conflict did Bebop emerge as a contrast to the prevailing "Swing" sound of the big bands?

Big bands generally featured ten or more musicians. When America entered World War II these musicians were not exempt from being drafted and, as a result, it became increasingly difficult to maintain both the numbers and the quality within such large ensembles.

This allowed smaller groups, quintets and quartets, to flourish and, in the process, create greater solo opportunities, the driver for improvisation which is at the heart of Bebop.
2. In what manner is Bebop considered to differ from the "Swing" sound of the big bands?


Answer: Bebop is seen to differ from Swing in all of these ways

Swing arrangements are made up of a series of composed sections with particular areas put aside for a solo, however, these moments for improvisation were limited. Bebop, on the other hand, is made up of a "head", which is a small composed section, over which a range of solos would then be built before the number concludes with a final "head" statement. The key to Bebop is improvisation within these solos, complete with unpredictable rhythms and complex harmonies, played at a much higher tempo than Swing.

In big bands the rhythm section, which usually consist of the bassist, pianist and drummer, serve as the pulse (or time keepers) for the ensemble but in Bebop they are encouraged to embellish and interact with the soloist.
3. With the focus on improvisation Bebop innovators abandoned all semblance of Swing music.

Swing has a Blues influence and a triplet-based feel and this is imported by Bebop artists as the basis for their sound. A number of Bebop pieces are simply new themes super-imposed on older Swing harmonies. For example, a 4/4 metric structure would be turned into 8/8 quavers, making the sound quicker to the ear. Bebop takes away the dance-ability of the piece but for the purist it is more about the listening than the dance.
4. Two of the prime movers and innovators of the new Jazz sound known as Bebop were trumpet player, 'Dizzy' Gillespie and an alt saxophonist with the nickname "Yardbird" or "Bird". Who is the saxophonist known as "Bird"?

Parker was born in Kansas and began playing the saxophone while he was at high school. Early in his career he was not noted for his playing ability and legend has it that at one gig a drummer threw a cymbal at him in sheer frustration at his lack of skill.

This drove Parker to practice incessantly and he soon began to gather attention for some of his up-tempo improvisations. He rapidly developed new ways to construct improvisations on top of chord progressions, accent notes within phrases and add and imply new chords that would influence the generations that followed him. His life, however, was a story of tragedies and drug addictions.

He died early, at age 35, but his recordings are held up as some of the most important documents of the modern Jazz era.
5. The Jazz community embraced the innovation known as Bebop with open arms.

Many of the leading Swing musicians felt insulted by Bebop and reacted with hostility. Tommy Dorsey claimed "it set music back twenty years". Louis Armstrong spoke of "weird chords which don't mean nothing". The music was discordant, it was aggressive and it couldn't be danced to. Those that had a proclivity toward Swing found little to enjoy about Bebop. Essentially audiences were split three ways.

Some of those that didn't take to Bebop clung hopefully to Swing. I say hopefully as Swing was starting to become difficult to find in the mid 1940s. Musicians were difficult to find for big bands and the costs of touring and salaries had risen dramatically. Additionally, many musicians had started to limit themselves to areas such as Los Angeles, New York and Chicago where they were drawn to studio work which offered lucrative returns.

The others gravitated toward a new breed of entertainers, the single act singers. These included artists such as Frank Sinatra, Nat King Cole and Sarah Vaughan.
6. Bebop popularised a singing fad that vocalised lyrics written for a previously recorded solo. By what name did this vocalisation come to be called?

Vocalese appeared at the end of the early bop era and seemed to be a new concept; however, there are some obscure examples of it that date back to the late 1920s. One of these was Bee Palmer's re-working of "Singin' the Blues" (1929). It wasn't until the late 1940s when Eddie Jefferson wrote lyrics to some of his favourite bop solos that vocalese managed to reach any level of influence. Vocalese wasn't easy to work with and it was a style that really tested the skill levels of singers, particularly when the solos were as complex as those of the bop era. A singer had to literally (for want of a better word) spew out the lyrics and also reach the same notes as the original solo. Those that were best skilled at this were Ella Fitzgerald and Sarah Vaughan.

It is important not to misinterpret vocalese as scat. Scat is the singing of nonsense syllables (shoo-doo-shoo-bee-ooo-bee) and it is generally improvised on the spot. Vocalese represents pre written lyrics for a pre arranged tune.
Doo-wop is a vocalisation of instruments that was developed by the Mills Brothers and The Ink Spots in the late 1930s. This rose out of a capella singing and the sounds created are meant to mimic those of the missing instruments. For example a bass riff could come out as "dooooo wop-wop" or guitars as "shang-a-lang".
Voice over is simply the voice of an unseen commentator on film or television.
7. Hard Bop emerged in the 1950s with a sound that possessed a more emotive quality than its Bebop predecessor. This was achieved by enmeshing Bop with a mix of Blues and what other spiritual sound?

Hard Bop is also known as East Coast Jazz. It continued to use Bebop's complex chord changes but the introduction of the Gospel/Blues mix gave the music an earthy quality. The term "funk" was one of the words originally coined to describe this sound. Hard Bop lends itself more readily to vocalese than its predecessor Bebop.

Hard Bop should not be confused with Soul Jazz which uses a much stronger Gospel component and far simpler compositions.
8. One of the early reactions to Bebop came to be known as West Coast Jazz. It is better known by what other term which has connotations to the emotional detachments within the sound?

The emotional detachment stems from the reduced emphasis placed upon the technical virtuosity that is so strong within Bebop and the leaning toward a more lyrical sound. Whilst the arrangements are created with greater complexity than early Bebop the tempo is far less frenetic. Horns and harmonies are a strong feature of Cool Jazz.
9. Hard Bop gathered momentum by the mid 1950s with the formation of the "First Great Quintet". This ensemble was put together by which legendary trumpet player best known for his 1959 album "Kind of Blue"?

Davis' music had been on the wane for a number of years due to his heroin addiction. He got himself clean, formed the band and proceeded to produce a sound that was filled with an urgency to push the boundaries of Hard Bop. In two marathon recording sessions during 1956 they put together enough material to produce four albums, all which have been labelled as classics. These were "Cookin'", "Workin'", "Relaxin'" and "Steamin'" (each had the moniker "with the Miles Davis Quintet" attached to them).

Eventually Bop would become constrictive through its constant use of repetition, which would lead to artists such Davis experimenting with a new format of jazz called Modal Jazz. Modal removed the emphasis on chord changes that was at the root of Bop and switched to using scales. This allowed their improvisations to be stretched for longer periods without repetition. Davis' "Kind of Blue" would become one of the leading influences in this approach to Jazz.
10. Which record producer, well known for his work with Michael Jackson, released an album in 1995 called "Q's Jook Joint" that endeavoured to combine Bebop with Hip Hop?

Jones is a trumpet player, conductor and musical arranger who is well recognised as the man who produced Michael Jackson's 1982 album "Thriller" and the charity song "We Are The World".

Quincy grew up with Bebop and was a great admirer of the work of Miles Davis. Both he and Davis added credence to the Hip Hop movement by combining its elements with those of Bebop. Davis did this through his last studio album "Doo Bop" in 1991 and Jones through "Jook Joint". In interviews Quincy has been quoted as indicating that the two genres are very much alike - the improvisations, the beats and the rhymes - their sensibilities are the same.

Nicholas Payton, a New Orleans Jazz trumpeter, in his "Dissertation on Hip Hop and Bebop" (2011) marries the two codes through their use of syncopation (defined as "a temporary displacement of the regular metrical accent in music caused typically by stressing the weak beat"). The triplet beat that drives Bebop, he says, is also the undercurrent of the rhythm in Hip Hop.
Source: Author pollucci19 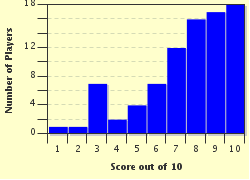 Related Quizzes
This quiz is part of series It's Not Only Rock and Roll, But I Like It:

There was a time when I only listened to commercial AM stations, thankfully that was a long time ago.