2006 saw Madonna take to the stage once again with her "Confessions" tour. She wanted to "turn the world into one big dance floor" and that she did.

Quiz Answer Key and Fun Facts
1. What was the opening number?

After arriving via a giant disco ball, the show began with this interesting choice from the "Confessions on a Dance Floor" album.
2. Where did the tour open?

Jamie King directed and also choreographed the show. Monte Pitman is a longtime member of Madonna's band, and Stuart Price was the musical director.
4. Which TWO songs from the "Confessions..." album were NOT in the show?

These were the only two songs from the whole album not in the show.
5. Which song was the Finale?

The show lasted for about 110 minutes and finished with gold balloons falling from the ceiling. (at the inside venues anyway!)
6. Which classic Disco song was mixed with "Music"?

One of the highlights of the show, "Music Inferno" - as it was called - kicked off the last segment of the show.
7. What was written on the back of Madonna's cape?

Madonna donned a light up cape for "Lucky Star" a la the late, great James Brown.
8. This tour featured the famous "crucifixion scene" that caused controversy the world over.

Once again, Madonna caused controversy for her performance of "Live To Tell" when she appeared suspended from a giant mirrored cross wearing a crown of thorns.
9. Which other classic Disco song was mixed with "Future Lovers"?

Originally sung by Donna Summer, the bass lines for these two songs are extremely similar.
10. Where did the tour finish? 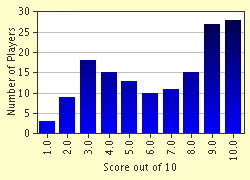 
Other Destinations
Explore Other Quizzes by scotjay