Who's That Girl? Why It's Madonna... Quiz

Get into the groove with this quiz on interesting facts on the Material Girl and her music...Good luck and enjoy.

Madonna's self-titled debut album was released in the summer of '83. The album had classic, old-school Madonna hit songs like "Lucky Star", "Borderline" and "Holiday".
2. There were only two songs on Madonna's debut album that she did NOT compose the lyrics for, nor did she contribute to their lyrics; which two songs were these?

A Warner Brothers producer named Reggie Lucas wrote the lyrics to "Borderline". He also contributed to the lyrics of "Physical Attraction". Madonna's self-titled debut album peaked on the Billboard 200 album chart at number eight in the autumn of '84 after a long, slow climb up the charts over a year.
3. What was Madonna's first U.K. Singles number one hit?


Answer: Into the Groove

"Into the Groove" was used as the soundtrack for the movie "Desperately Seeking Susan", in which Madonna played the role of Susan. The music video for the song had clips from the movie itself.
4. In which music video, featuring her dog Chiquita, can you see Madonna wearing skintight black leather outfits?

The 1999 Grammy award winner for Best Female Pop Vocal Performance was Celine Dion for the song "My Heart Will Go On". The song was heard in the movie "Titanic".
6. What was Madonna's longest-running U.S. Billboard Hot 100 number one hit song of the 1990s?

"Take a Bow" was number on on the U.S. Billboard Hot 100 chart for seven weeks! It was number one for the whole month of March in 1995.
7. Madonna's last studio album of the eighties was the worldwide success "Like a Prayer". The album reached number one on many album charts worldwide. On which of these album charts did the album NOT peak at number one?

"Like a Prayer" actually peaked at number four on the Australian Albums chart. About half the songs (six of eleven) on the album were released as singles in the U.S. and had great to fair success on the Billboard Hot 100 chart.
8. Which of these singles from Madonna's "Like a Prayer" album was released in 1990 in the U.S.?


Answer: Keep It Together

"Keep It Together" was released as a single near the end of January of 1990 and peaked at number eight on the U.S. Billboard Hot 100 singles chart. All the other five singles from the album were released in 1989.
9. How old did Madonna turn on her birthday when she married actor Sean Penn?

They got married on August 16th, 1985, which was Madonna's 27th birthday. The marriage only lasted a few years.
10. In the year 2000, Madonna released an album called "Music". The album topped the U.S. Billboard 200 chart a few weeks after it was released. Madonna was not the first female artist to have a number one Billboard 200 album titled "Music". What other female artist topped the chart in 1972 with another album called "Music"?

Madonna's album included the hit songs "What It Feels Like for a Girl", "Don't Tell Me" and of course the title-track. Carole King's album released almost thirty years earlier has a dozen tracks including a hit song called "Sweet Seasons".
Source: Author meow765 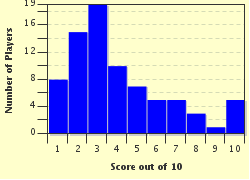 
Other Destinations
Explore Other Quizzes by meow765