My second quiz about Madonna. This time it's a little harder! Just concentrate and good luck.

Although it was a great album, it didn't sell as much has the one before, "True Blue".
2. Madonna's first album was released in 1983.

Madonna made this song for the video "Vision Quest" in 1985.
4. What's the name of this song? "My name is Dita, I'll be your mistress tonight, I'll be your loved one darling, turn off the light..."

This music was made for the "Sex Book" edition. The "Erotica (Night Club Remix)" was a simple remix from the original album music. "Deeper and Deeper" is from the album "Erotica".
5. Is this lyric from Madonna? "You're just too good to be true...Can't take my eyes off you...You'd be like Heaven to touch..."

The name of the song is "Can't Take My Eyes Off Of You" and it was performed by Boys Town Gang, among many other artists.
6. What's the name of the film, in which Madonna had a song on the soundtrack called "American Pie"?


Answer: The Next Best Thing

Released in 2000, many famous actors were in it. For instance: Madonna, Rupert Everett, Benjamin Bratt, etc.
7. What's the name of the film in which Madonna had a song called "Fever" ?


Answer: It didn't appear in any film!

"Fever" is a song from the album "Erotica", and it had a clip. Nothing else.
8. When was Madonna born?

Named Madonna Louise Veronica Ciccone, she's now a star, known all over the world.
9. In which clip from a famous song, did Madonna kiss a "God"?


Answer: get into the groove

This song was from the album "Who's that Girl". The song's called "Causing a Commotion".
Source: Author Agrias 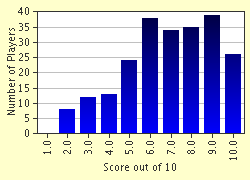 
Other Destinations
Explore Other Quizzes by Agrias