Answer these questions about the pop icon's most memorable men.

Quiz Answer Key and Fun Facts
1. Which of her men was a deejay and aspiring record producer in 1982, and also produced "Holiday" from her debut album?

Dan Gilroy was Madonna's boyfriend before Benitez. Jim Albright was hired as a bodyguard but became her man from 1991 to 1993. Arthur Baker was Benitez's friend.
2. What famous actor was by her side during her "Blonde Ambition" Tour, and had cameos in her video "Truth or Dare"?

3. Which lover was hired as Madonna's bodyguard for the "Sex" book project, but later turned into a three year romance?

4. In 1987, Madonna met this guy in New York. Madonna was very interested in his mother but she could not win her over. Who was he?

Madonna tried to win Jackie Onassis over, but it didn't work. Their relationship was short and ended because Madonna looks for a man who can take control. Obviously JFK, Jr. didn't do this.
5. Who is the father of her son Rocco?

6. He was depressing and she had high spirits. Which man lasted only three months because they were definitely opposites in 1982?

Basquiat died of a heroin overdose in 1988.
7. Also known as Robert Van Winkle, this music artist did not like her music, but became very fond of her?

Vanilla Ice is in some photos of her "Sex" book.
8. In 1994, Madonna met this basketball star at a party and had a short affair. Who is he?

Thier relationship only lasted 2 months. He even wrote about their sex life in his autobiography.
9. This man made Madonna take a second look while running in the park. He also fathered their daughter, Lourdes. Who is he?

10. This man was Madonna's first husband. He was known to have quite a temper. Who was this lucky man to walk down the aisle with the pop icon herself first?

Madonna spotted him on the set of the "Material Girl" video in 1985. They married on her birthday, August 16. Madonna filed for divorce in December of 1987.
Source: Author staym44 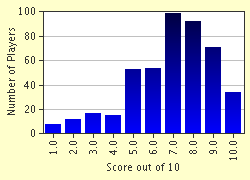 
Other Destinations
Explore Other Quizzes by staym44