This is the first quiz I have created. Hopefully I did a decent job. I attempted to create questions I have not seen before in other Madonna quizzes. Sorry to any other creators if I have duplicated a question.

Madonna plays Elspeth, part of a coven, in the "Missing Ingredient" segment of this 1995 film.
2. What actor has appeared in the most films with Madonna?

Both Niki Harris and Donna Delory have been around since the early days, making appearances in many albums, several tours, and the "Vogue" video.
4. What song do Madonna's long time back up singers help perform on the album "Ray of Light"?

This is the only song on this album that Niki and Donna are given credit for as back up singers.
5. What title did Madonna's Official, Authorized Fan Magazine, which started in 1991, adopt after three issues?

"ICON" is the only official, authorized fanzine. It started in 1991 as "Like a Fanzine" but by the third issue changed to "ICON". It is published four times a year and each issue includes, among other things, a letter from Madonna.
6. To whom did Madonna dedicate her "Like a Prayer" album?

The liner notes from her fifth official release, not including soundtracks, reads simply "This album is dedicated to my mother who taught me how to pray."
7. What is the very last song performed during the "Drowned World Tour" (including encores)?

This scene is played out in "Truth or Dare". The police come to the Sky Dome to deliver the news. Madonna goes ahead with the show as scripted; no police action was taken.
9. What children's book did Madonna contribute to, for charity?

The book was done as a benefit for the Starbright Foundation in 1998. Madonna wrote and narrated the section for The Empress. Other contributors were Harrison Ford, Nathan Lane, Dr. Ruth Westheimer, Penny Marshall, Robin Williams, Rosie O'Donnell and Gen. H. Norman Schwartzkopf among others.
10. Which movie has Madonna NOT had a song appear on all versions of the official Soundtrack?


Answer: "A League of Their Own"

This is somewhat of a trick question. "This Used to be my Playground" did appear in the movie "A League of Their Own", but it is not on the official soundtrack. "With Honors" has "I'll Remember", "Die Another Day"-"Die Another Day", and "Vision Quest" has both "Crazy for You" and "Gambler".
Source: Author promise2try 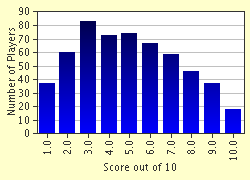 
Other Destinations
Explore Other Quizzes by promise2try