Madonna - the Queen of the Universe Quiz

Let's see if you know Madonna enough to correctly answer all the questions! There's only one Queen! Have fun!

Frida Kahlo (1907 - 1954) was a famous Mexican painter who is best known for her self-portraits and her complicated life. Madonna Herself owns a couple of original paintings by Frida, who is Madonna's favorite artist of all time.
2. In 2013 Terry Richardson did a photoshoot with Madonna for what magazine?

In this photoshoot Madonna's wearing Her infamous "grills" (I personally loved them) and the November issue included the first autobiography written by Madonna Herself.
3. During Her MDNA Tour, one of Madonna's children joined Her onstage. Which one?

Madonna's son Rocco was a dancer on the MDNA Tour who had a chance to show his skills during "Papa Don't Preach", "Like A Prayer" and "Celebration". His sister Lola was working for Her mom as an assistant in the wardrobe department.
4. What is Madonna's "Secret Project" about?

Madonna, Steven Klein and the dancers from the MDNA Tour made a short black and white movie that you can find on Madonna's official youtube channel. Madonna wants to start a revolution of love and the project is about tolerance, freedom of speech and expression, racism, sexism, discrimination etc. We all can join Her revolution and fight for Freedom! (artforfreedom.com)
5. At the New York premiere of the Secret Project Madonna sang a song called ________.


Answer: Between The Bars

"Between The Bars" is a song written and composed by Elliott Smith - American singer, songwriter and musician.
6. Madonna finally personally joined one of social networks on February 10 2013. What network am I talking about?

Yes, even Madonna couldn't resist the power of the internet and She (thank God!) posted Her first photo on the Instagram with a nice message: "Cheers _ ! I'm on instagram".
7. In 1994 Madonna appeared on the catwalk at Jean Paul Gaultier's fashion show with a baby-carriage. What was in there?

This puppy was given by Madonna to Her publicist Liz Rosemberg right after the show. The doggie died on August 19, 2013.
8. What is Lady Gaga like, according to Madonna in a 2012 interview?

During an interview with Cyntia Nixon from 2012 Madonna described Gaga's behavior as "reductive"... this term is now very popular among Madonna's fans.
9. What book is Madonna reading in Her documentary called "I'm Going To Tell You A Secret"?

Zohar is a spiritual text that explains the secrets of the Bible, the Universe and every aspect of life. According to ancient kabbalists, the Zohar is the greatest gift we can give or to receive in this world, so it must be treated with the utmost respect. That respect can only be shown through our sincerity and devotion when approaching its teachings.
10. There is a special store in Paris dedicated to Madonna. What is its name?

The record store "Lucky Records" was opened in 1991 and in addition too Madonna there are many international and French artists from 50s to the present. however, Madonna is the most important artist in the shop where you can buy many collectible items.
Source: Author EmCiccone 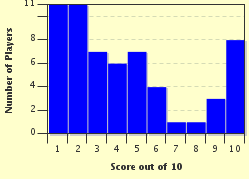 
Other Destinations
Explore Other Quizzes by EmCiccone