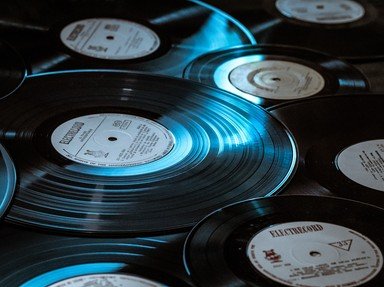 You'll see two songs on the left side and you're asked to match them with the appropriate duo on the right.

Recording from 1958 to 1962 they only reached number eleven twice on the US charts. "Cherry Pie" was a rendition of the earlier version by Marvin And Johnny.
3. "Surf City", "Dead Man's Curve"

Jan Berry's career suddenly ended in a car accident in 1966 on "Dead Man's Curve". He was hospitalized until 1968 and had lost many of his abilities. 1963 to 1966 were their best years and they never regained their status. Jan died in 2004. Many fans say that they sounded like the Beach Boys in many of their songs.
4. "A World Without Love", "I Go to Pieces"

Starting in 1962 and finishing their duo in 1977, both of these songs reached number one on the US R&B charts. A few of their songs also hit the charts in Britain.
6. "Yesterday's Gone", "Willow Weep for Me"

Although from Britain, only "Yesterday's Gone" made the British charts. "Willow Weep for Me" was their only number one hit on the Easy Listening charts.
7. "Let's Fall in Love", "Close Your Eyes"

They recorded a song, "Love is Strange", made popular in the 50s by Mickey and Sylvia. They continued singing from 1966 until the early 80s.
8. "Feel So Good", "Let the Good Times Roll"

From 1952 to 1961 they only recorded a dozen songs but the two mentioned hit number one and number two on the US R&B charts. Their duets were characterized by Shirley who seemed to be just a half note off key which made the music very interesting to hear.
9. "The Mountain's High", "Tell Me"

Their popularity ran for only a few years from 1961 to 1964 even though they continued together until the end of the decade.
10. "I'm Your Puppet", "Shake a Tail Feather"

They recorded from 1966 until 1977 but their popularity waned starting in 1968 and they never reached higher than number five on the Pop charts with their first song "I'm Your Puppet".
Source: Author khmerbob

Related Quizzes
This quiz is part of series Mix of Farts:

A mix of quizzes by the erudite Old Farts


1. First Ladies of the United States Very Easy
2. Sports the Way I Play Them; Part One Very Easy
3. 1960 in Popular Music Average
4. Rock/Pop/R&B duos from the 50s and 60s Average
5. "41 For Freedom": The FBM Submarine Very Easy
6. Putting the Cat Among the Pigeons Average


Other Destinations
Explore Other Quizzes by khmerbob